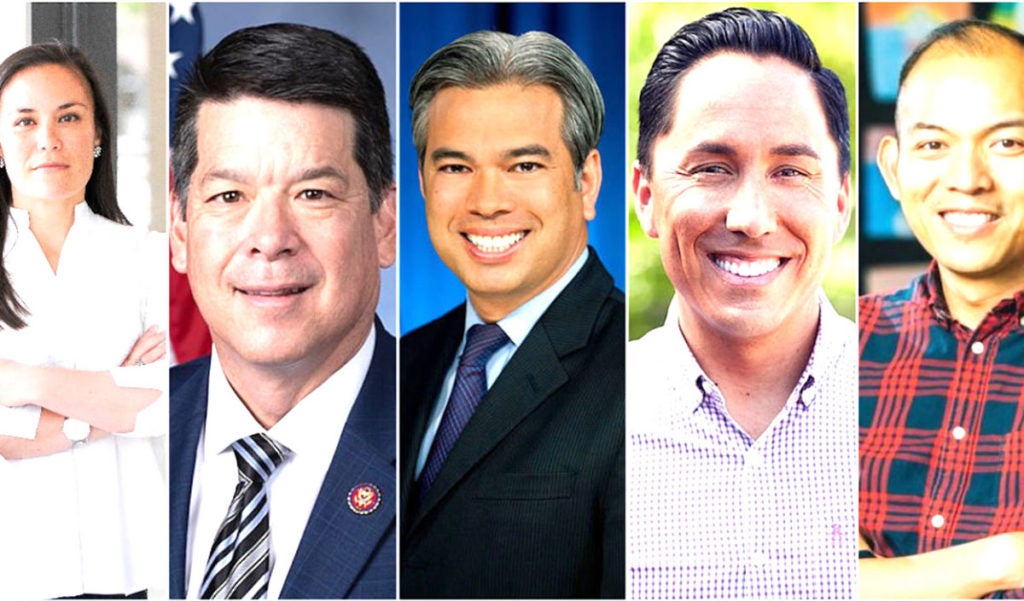 LOS ANGELES — Several Filipino Americans vying for seats on the federal, state and local levels will advance to the general election in November following the March 3rd primary.

For Texas’ 23rd Congressional District, Filipina American Gina Ortiz Jones secured the Democratic nomination with 66% of the votes on Tuesday night, March 3. In November, she will face either Tony Gonzales or Raul Reyes, both Republicans who will advance to a run-off in May.

A former Air Force intelligence officer, Ortiz Jones first ran for the seat that covers the southwest portion of the state during the 2018 midterm election but was narrowly defeated by incumbent Republican Rep. Will Hurd with less than 1,000 votes.

“I’m honored to be the Democratic nominee in Texas’ 23rd Congressional District. I’ve dedicated my life to public service, and I’m running for Congress to expand the opportunities that allowed me to grow up healthy, get a quality education, and serve our country,” she said in a statement. “Folks in South and West Texas are ready to send a leader to Washington who will fight for quality, lower cost health care, responsible and compassionate immigration reform, and an economy that works for everyone.”

In California’s 21st Congressional District, Rep. TJ Cox — the first Fil-Am from the state to serve in Congress — will face Republican David Valadao anew in November. Cox received 36.1% of the votes, while Valadao clinched 53.1%.

An engineer and small business owner, Cox won the seat in 2018 and became the first Democrat to represent the Central Valley district since 1981.

Under the state’s top-two primary system, the two candidates with the most votes for any office advance to the general election, regardless of party.

For the state Assembly, incumbent Rob Bonta received 85% of the votes for the 18th Assembly District. Bonta, who made history as the first Fil-Am to serve the state legislature, has been in the seat since 2012, covering Alameda, Oakland and San Leandro.

“Thank you, voters of the 18th Assembly District for your support! It’s an honor to serve you and I’m proud to represent the most engaged, progressive, and ‘woke’ constituents in the state!” Bonta wrote on Twitter following his victory.

For the Assembly District 53 race, 35-year-old Godfrey Santos Plata will head to the general election in November against incumbent Miguel Santiago, who is also a Democrat.

Plata, who received 33.8% of the votes, wrote on Twitter that “We advanced to Nov’s general election! In CA, the top-2 vote-getters move forward, regardless of party or majority vote. You can still #GoWithGodfrey!”

An advocate for public educators, Plata seeks to be the first openly gay immigrant and first Filipino from the LA area in the state Legislature. The district covers southern regions of Huntington Park and Vernon to parts of the east side of Boyle Heights and Downtown LA to Koreatown and Pico-Union.

“More than 1/3 of voters in the district said NO to the status quo. In a Dem-Dem race, this is feedback for the incumbent, for the Democratic Party, and for Sacramento: there is thirst in our district for a different direction in leadership and a different type of representation,” Plata continued, adding, “The work our campaign has done and will continue to do is building something much longer-term for all those who have volunteered, engaged, and voted.”

In San Diego, Assemblymember Todd Gloria topped the race for San Diego mayor and will compete against city Councilmember Scott Sherman in a November runoff. Gloria secured 40.2% of the votes, as of Wednesday morning.

Gloria — who is of Filipino, Dutch, Puerto Rican, and Native American descent — was elected to represent the 78th Assembly district in 2016.

A native of San Diego, he previously served two terms on the city council, including as council president and interim mayor following Bob Filner’s resignation. He would also become the city’s first openly LGBTQ mayor if elected in November.  (Christina M. Oriel/AJPress)