Filipina nurses say why they back Sanders and ‘Medicare for All’ 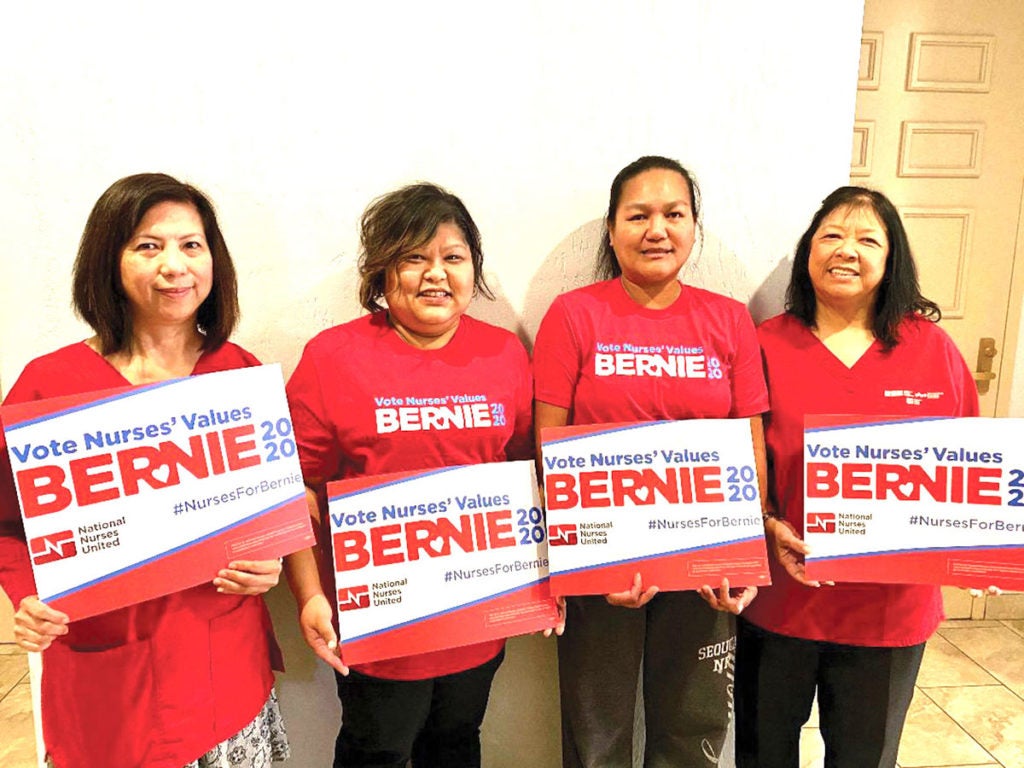 LOS ANGELES — For Filipina American registered nurse Mary Magtanong-Sigua, one of the hardest choices her patients face is whether to pay for their medical care or groceries.

A registered nurse since 2004 working in Vallejo, California, she’s a proponent of Medicare For All — a contentious issue within Democratic presidential primary — that pushes for a single-payer, national health insurance program to address the uninsured and underinsured in the United States.

“That’s my everyday reality with my patients, which is why I feel very strongly about Medicare for All,” Magtanong-Sigua told the Asian Journal. “I do believe that patients should not have to worry about where their next meal is coming from or if they can pay for their medications.”

She’s one of over 150,000 nurses of National Nurses United (NNU), the largest union for RNs in the United States, which has thrown its support behind Vermont Senator Bernie Sanders for the Democratic Party presidential nomination.

The union previously endorsed Sanders during his 2016 run and did so again during this cycle after sending questionnaires and having face-to-face meetings with several candidates, according to NNU President Zenei Cortez, the only Filipina to lead a national labor union in the U.S.

“Bernie was the most aligned with our values and with our agenda,” Cortez, an RN for over 40 years working in South San Francisco, told the Asian Journal.

Under Sanders’ proposed Medicare for All, the single-payer health insurance program would cover everyone living in the country, regardless of immigration status or income level, and would reportedly not have any premiums, deductibles, copays or surprise bills.

The campaign also calls for Medicare coverage to include dental care, mental health and substance abuse treatment, among others, and capping prescription drug prices.

“Medicare for All is the only solution there is to our current broken healthcare system. It’s ethically insane living in America, the richest nation in the world, and people cannot seek medical care whenever they need it and to seek early care to prevent the disease process from progressing,” Cortez continued.

“So, I am really passionate about getting Medicare for All because it will improve the overall health of the people of the country, it will be cost-effective, and it will save us a lot of money in the long run.”

A recent study, conducted by researchers at Yale University, the University of Florida and the University of Maryland and published in medical journal The Lancet, found that the single-payer health care system would save the country $450 billion annually and prevent on average 68,000 unnecessary deaths.

Meanwhile, an October 2019 study by center-left think tank Urban Institute said that Medicare for All would need $34 trillion in additional federal spending for the first 10 years, which is more than the federal government’s total cost over the coming decade for Social Security, Medicare, and Medicaid combined.

At the Democratic primary debate in Las Vegas on Wednesday, February 21, Sanders was asked about his central campaign proposal and whether it would take away private insurance options or reduce certain benefits as many, especially other union members, fear.

“So, let me be very clear to my good friends in the Culinary Workers Union, a great union,” Sanders said. “I will never sign a bill that will reduce the health care benefits they have. We will only expand it for them, for every union in America, and for the working class of this country.”

In addition to the health care plan, Cortez argued that a Sanders presidency will also improve the workplace conditions for nurses, given that it’s a preferred profession for many Filipinos.

“Sanders is the only candidate that is really for looking at the welfare of nurses who will be taking care of the patients,” Cortez said, recalling when the Vermont senator rallied with Oakland nurses in 2014 to call for more safety protocols and equipment to beat the Ebola virus.

“He was the only elected candidate to come out and help us win that fight because he stands for the working class and is part of the 99%. He understands the needs and the struggles that we go through every day.”

Cortez and Magtanong-Sigua were among hundreds of NNU nurses from California who came to Las Vegas ahead of Nevada’s February 22 caucuses to canvas for Sanders.

“I think our fellow kababayans should realize that, and while we are here busy trying to fight for social, climate and economic justice, somebody in the White House has been stripping union members of their rights and their privileges. We might wake up one day and realize that everything that we have bargained for through our collective bargaining agreement is all gone,” Cortez said.