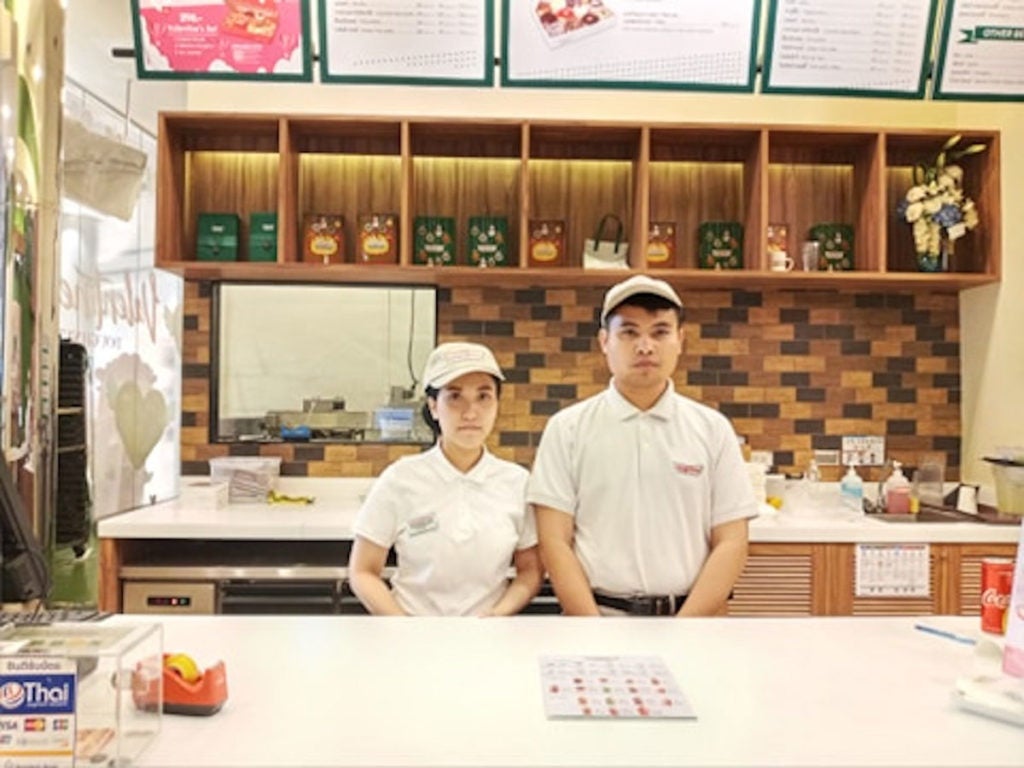 On February 13, our life resumed. We all gathered at Terminal 21 Mall in Nakhon Ratchasima City (Korat), the scene of the deadliest mass shooting in Thailand’s history.

Tambon sai batr, a Buddhist cleansing ceremony and the U-tid Suan Boon ceremony for the dead were held. Businesses, the city and municipal government, schools, the police and military were present, giving free food and drinks to everyone.

Our safe place was no more.

“You knew Thailand as a safe place, but not anymore,” Professor Boonlert Visetpricha, an anthropologist at Thammasat University tells me.

The killings coincided with preparations for Makha Bucha Day, the third most important Buddhist Holiday. Buddha delivered his teachings on the Third Lunar Month. These teachings are: cease from evil; do good; cleanse the mind.

As news of the shootings swept Thailand and the rest of the world, we marked ourselves safe at Terminal 21 Korat. Korat has been our home since 2013.

Terminal 21 Korat opened in 2017. It is a seven-storey shopping and recreation complex known for its airport-like structure, including a huge model airplane and a control-tower, where visitors can view the entire city of Korat. Each floor is decorated according to the locale it represents: The Caribbean; Paris; Rome, Tokyo; London; Istanbul; San Francisco; Hollywood. 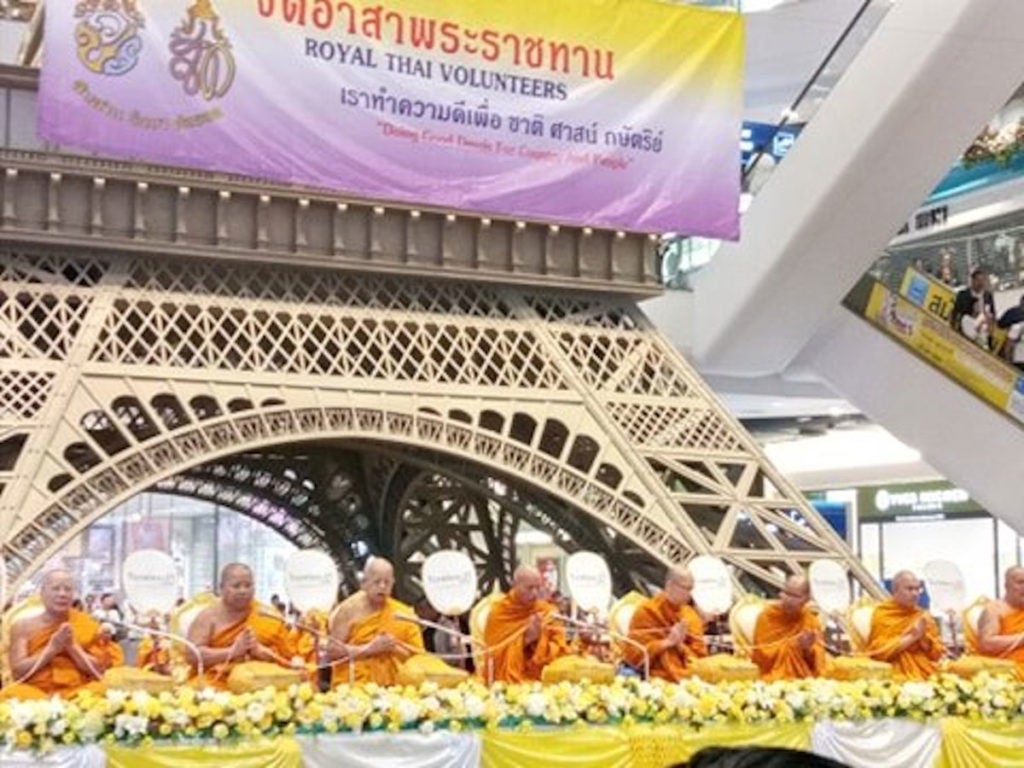 It is a friendly neighborhood mall where we pay our bills, buy groceries at the 24-hour Foodland Supermarket and send remittances; it’s a place for rendezvous with friends visiting Korat, and many more. We are familiar with the staff because some were students, neighbors, or anyone who had been standing with us at the bus stop waiting for our rides.

Like all establishments in Thailand, the guards at Terminal 21 do not have guns or any weapons. Some are even elderly persons.

David Apurado is a Filipino teacher at Surathampitak School at the Surathampitak Army Camp. Most military personnel have children attending the school.

At 3:30 p.m. on the day of the mass shooting he was at Terminal 21 Function Hall on the 4th floor to welcome the students and parents attending the prom.

After a few minutes, they saw frantic shoppers running to the Hall seeking refuge. Around a hundred people hid inside the Function Hall, including students, teachers and some parents. The gunman was inside T21.

One of the parents was an off-duty soldier attending a prom. He took leadership of the group. The doors were locked and lights were turned off, except for a LED light.  They could not hear the gunshots because the Hall is sound-proof.

“He instructed us to sit down and remain calm. The kids were told to hide under the tables. Parents comforted the kids who were crying,” David says.

Ten minutes before midnight, they were evacuated. They were instructed to take off their shoes and walk fast on tiptoes, bodies bowed down to evade the attention of the gunman. 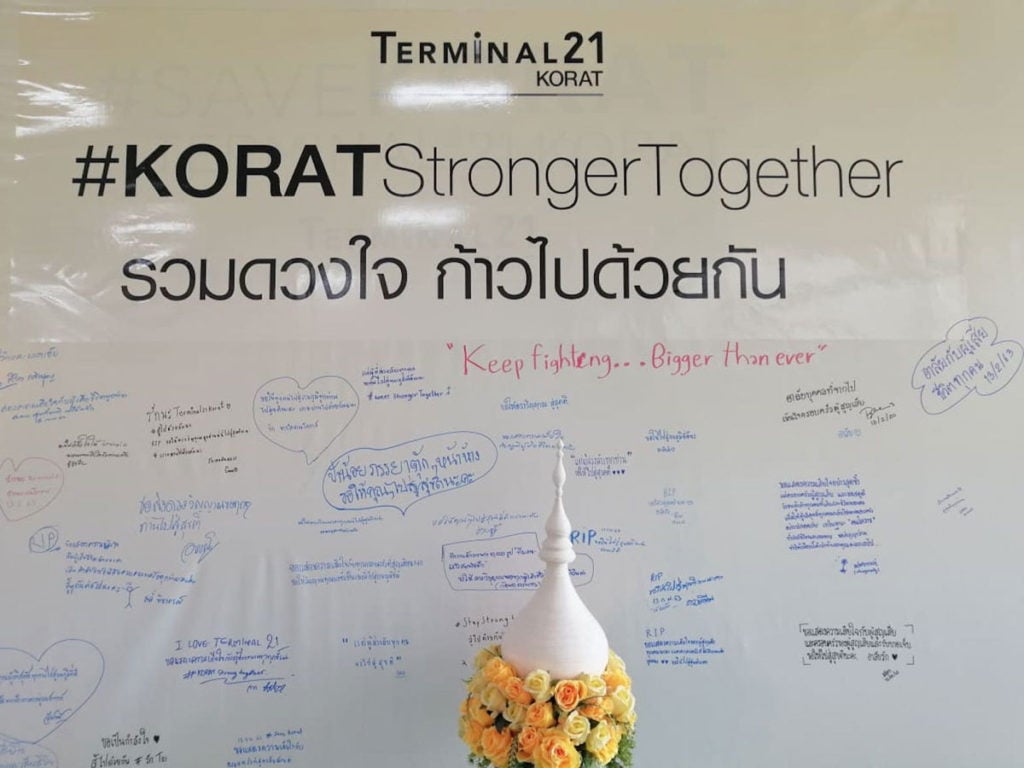 Memorial wall for those who perished in Thailand mass shooting. CONTRIBUTED

The kids and their parents were the first to be evacuated, followed by the teachers, and the rest of the shoppers. From the 4th floor, they exited to the parking area and walked until they reached the other side of the Mithraparb Highway. They were met by families, friends, volunteers and medical staff.

“No one was physically hurt in our group, but it will take time for everyone to heal from this traumatic experience,” David says.

Kanoknad Netchaleerat, a teller at Government Savings Bank, was accepting deposits when they heard the gunshots. There were ten clients and seven staff inside. They immediately turned off the lights and told the people not to panic. They stayed inside the small room behind the office until they were rescued at 12 midnight.

“We were very scared, but we must not show it to our clients,” Kanoknad says.

Krispy Kreme staff Treetamat and Wantaya, were working in the Ground Floor when the gunman stormed in. A family of four were still having their snacks.

“When I heard the gun shots and saw the people running, I immediately closed the metal door and told the customers to get inside our small kitchen,” Wantaya says.

“We have to remain calm. We told the kids not to cry. We gave them some doughnuts,” Treetamat says.

Wantaya followed Facebook posts and sent messages to the rescuers. After five hours, they were rescued.

Mary Grace Lanada, the company’s operations head applauded the heroic acts of the staff. “Their presence of mind and composure saved them and the customers,” Lanada says.

With the hashtag #Korat Stronger Together, the city is bouncing back from the tragedy.

The Thai government sent Mental Health Crisis Assessment and Treatment Teams to Terminal 21. The survivors and the victims’ families are seeking counseling and possible treatment.

Staff who are affected were also given separate counseling by their companies.

Krispy Kreme, one of the largest franchises in Thailand, distributed doughnuts to people attending the ceremony.

“We give food for healing,” Zitanantanissa Sanguanphao, marketing executive of Krispy Kreme explained.

Terminal 21 management assured the public of assistance to the victims of the shooting. Security measures to prevent such tragedy would be given priority.

Thailand comes third when it comes to violent gun deaths per 100 thousand people in 2017. First was the Philippines with 9.20, second was the United States with 4.43 and Thailand with 3.71, according to Institute for Health Metrics and Evaluation.

Jilted lovers, gang activity, or conflicts due to personal reasons are the common causes of gun violence.

Obtaining a gun is not difficult. A prospective gun buyer states reasons — property, asset protection, business, self-defense, sports or hunting, Before the licensing is a background check to find out if the buyer has no criminal records within five years before application.

According to GunPolicy.org, of the 10 million privately owned guns, around 6 million are registered and the rest are unaccounted for.

Professor Pandit Chanrochanakit, a political analyst and deputy dean of political science at Chulalongkorn University, says that the carnage also shows how the military works against its low-ranking officers.

“They (the low-rank) are not given any channel to report the abuses of their superiors,” Professor Pandit says.

The motive behind the shooting spree was allegedly fueled by a land dispute between the shooter and his commanding officer, which was among the first casualty.

“People may have anti-societal behaviors, but they don’t kill that many people in a single day. What happened in Korat is devastating because the perpetrator was a soldier who had access to guns,” Boonlert said.

Boonlert also explained that bullying is very common in the Army. “When they have nothing to lose, they can act against the society. And it could be bloody.”

“Getting rich from corruption and taking advantage of other people, do they think they can bring money with them to spend in hell?”

“Our mourning is never enough if the government and the army show no responsibility and will not act to reform the military,” Professor Pandit said.