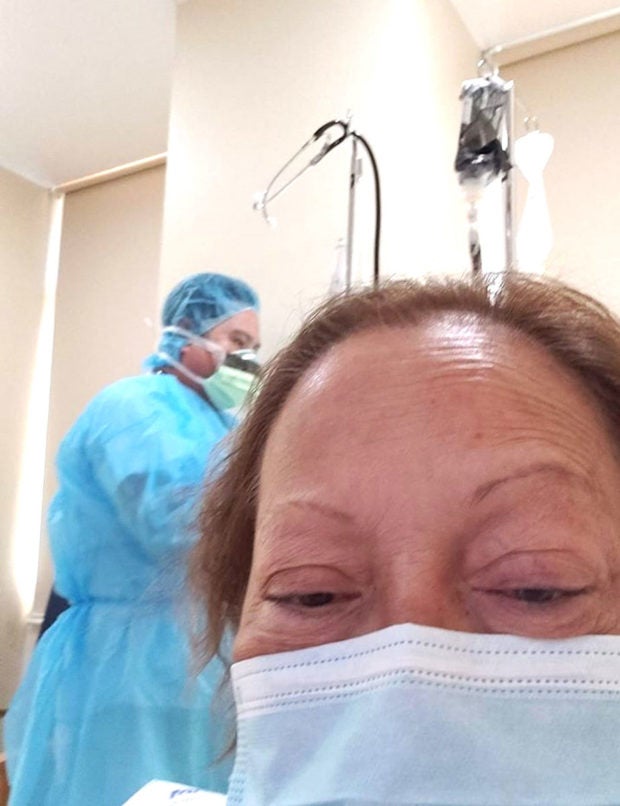 Tita Pearl is in an isolation room with an attending nurse. CONTRIBUTED

SAN FRANCISCO — Words of encouragement, hope and prayers continue to pour in for a beloved San Francisco Bay Area Filipina business woman who is now in isolation and quarantined in a Metro Manila Hospital for novel coronavirus screening.

Tita Pearl, as she is known to many in the Bay Area, is now confined at undisclosed Metro Manila hospital and was newly transferred to a regular room after staying in isolation room and quarantined for some days for exhibiting suspected novel Corona virus (nCOv) symptoms.

“Get well soon,” “Sending positive vibes,” “Keep hydrated” filled Tita Pearl’s Facebook page, as well as queries like “Why are you isolated and quarantined?” “Did you go to China?” 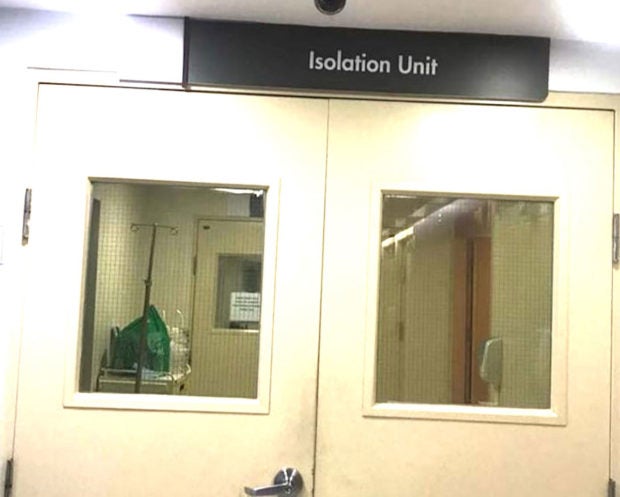 This is the door leading to the isolation room of the Metro Manila hospital where Tita Pearl was quarantined. CONTRIBUTED)

“The support, encouragement and kind words I got from well-meaning relatives, friends and other loved ones were overwhelming,” gushed Tita Pearl. “You have to let people know how to help you. Let’s stop pulling people down its best to uplift. You might need the kind words in the future. I know people who cared. It’s really true you know your friends when you are in crisis…they are the ones that pull you up when you are down.”

Tita Pearl intimated that she decided to come out with her story at the risk of being ostracized, stigmatized and/or avoided even after her quarantine, so that the right information on the virus can be disseminated.

“Panic blaming, all negative energy is waste of time and hurtful. Supporting each other sharing correct info and learning from each other, sharing best practice can only lead to more knowledge and understanding. If you hide things because of shame and fear of what people will say progress will not happen,” she explained.

Tita Pearl and company left San Francisco International Airport (SFO) on January 23 for Wuhan City, China for a business trip that had been scheduled and booked months ago. She admitted that she had a cough and cold that later worsened with sore throat and fever while on her flight.

Their Wuhan City flight became one of the first to be canceled, and they had to layover to Guangzhou, China on a 10% plane occupancy before proceeding to Manila.

Once in Manila, she had herself checked to get the right medicines at a well-known Metro Manila hospital. She was told she had pneumonia. For a faster recovery she was confined and, as an added precautionary measure due to fear of the nCoV contamination, she was eventually placed in isolation and quarantined on January 30.

“My swab was sent to Australia for testing. First sample was negative and they had to repeat. And when it was negative again on February 4, I was moved to a regular room on February 5 from isolation. Before then I had my appetite back and was taken out of oxygen connection on February 3,” she narrated.

“Just the same, I have to finish the required 14-day quarantine period. Their protocol is in place and moving smoothly although it is like you are in prison at isolation. The rooms are comfortable and staff try their best to be supportive.”

She is in touch with family, relatives and friends through Facebook, messenger and Viber applications on her smart phone. This arrangement helped her cope with her situation.

In an earlier Facebook entry, Tita Pearl described her isolation:

“FEELING TRAPPED!! in isolation. Television is your main source of information which makes you rely on their version of truth. Some of them reflect what you are feeling and going through and yet some has exaggeration attached and others incomplete that leaves you with more doubts.

“Being one of the few under investigation does not feel good and it puts you in limbo with crazy thoughts circling in your head. Waiting is worst trapped you can be in when decision is taken out of your hands and you are not part of that decision making yet your body and history is the SUBJECT that matters the most. I started documenting my feelings, my symptoms and taking notes any changes my trusted friend Mr. Google always on hand to assist. My only way of coping and hoping my own research makes sense to me and others. 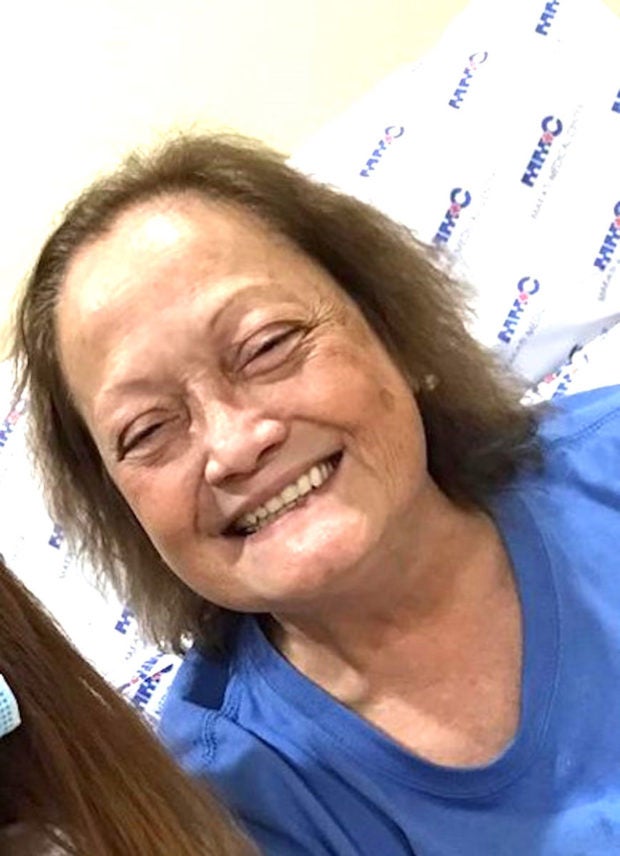 “Government, media, health workers, public, they have all their processes and being investigated (makes me) feel trapped in this time zone and put(s) our life on hold… maybe you are partly responsible for this pandemonium just (for) being in the wrong place at the wrong time.”

She regrets that a few blamed her predicament as something she “brought upon herself.” She reiterates that she was never been found positive for nCoV.

As of February 4, the Philippine Department of Health reported that the total number of admitted persons under investigation was 90, with 12 discharged, 1 with confirmed coronavirus and 1 dead.

In the National Capital Region (NCR), 31 persons are under investigation 2 were admitted, 2 were discharged and 1 died.