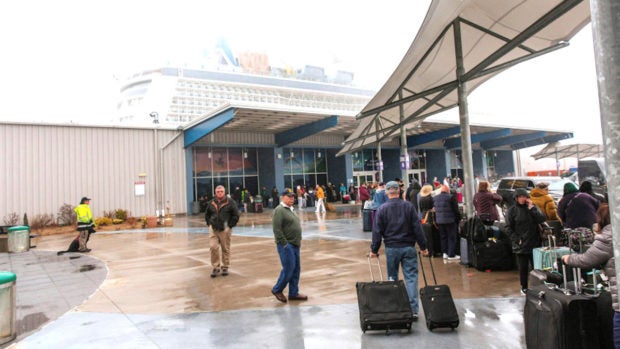 Passengers await transportation after disembarking from the cruise ship Anthem of the Seas at the Cape Liberty Cruise Port on Friday, Feb. 7, 2020, in Bayonne, N.J. Passengers were screened, as a precaution, for coronavirus. AP PHOTO

BAYONNE, New Jersey — A 54-year-old Filipino crew member was found dead in the engine room of a cruise ship that was delayed in New Jersey for the screening of more than two dozen passengers for the coronavirus, but law enforcement sources say viral infection didn’t appear to be the cause of his death.

Still, authorities are treating the death “with an abundance of caution” and are awaiting autopsy results, according to an NBC 4 News report.

Royal Caribbean’s Anthem of the Seas cruise returned to Bayonne, New Jersey Friday morning so that 27 Chinese nationals could be screened for signs of the virus. The virus has sickened tens of thousands in mainland China and killed more than 700. Four were taken to a hospital out of caution.

Royal Caribbean on Saturday said the four passengers were being tested by the CDC, adding that none of them “showed any clinical signs or symptoms of coronavirus.” “One had tested positive onboard for Influenza A,” the company noted.

FEATURED STORIES
Why health experts are not warning about COVID-19 in food
How to Use Resistance Bands: 20 Exercises to Try
‘Food Buddha’ Rodelio Aglibot passes away in Ohio

The Filipino crew member’s body was kept in a refrigerated compartment until the ship docked in New Jersey, according to the sources. The body was taken to Newark for a “rush” autopsy.

It wasn’t immediately clear when the results would be released, but a law enforcement source said he had no signs of having the coronavirus.

Bayonne Mayor Jimmy Davis told News 4 that none of the 27 people who were screened were from Wuhan, the epicenter of the virus, or had traveled there since the outbreak was first identified.

MORE STORIES
CBD Oil South Dakota
Why health experts are not warning about COVID-19 in food
‘Food Buddha’ Rodelio Aglibot passes away in Ohio
Don't miss out on the latest news and information.