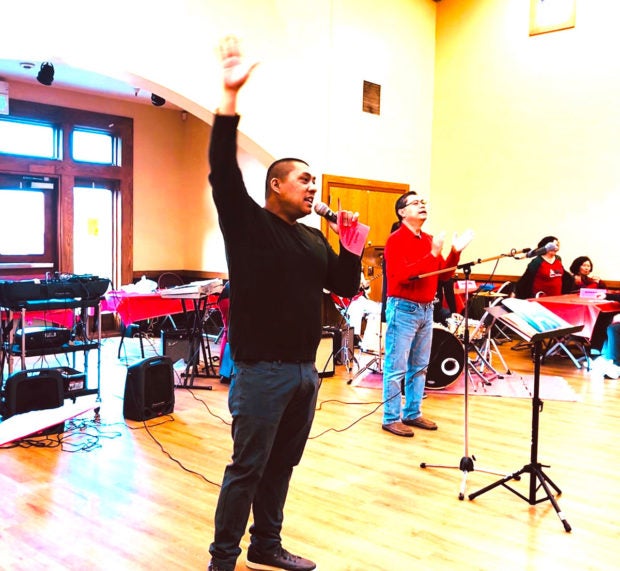 DALY CITY, California — How does someone born toward the turn of the last millennium become an expert on serving contemporaries, both of his parents, and their parents?

Angelo Ignacio Jr. knows exactly how.  The energetic under-40-year-old would be the best argument against the reputed self-centeredness of his generation. He has devoted his youth to keeping Daly City’s Lincoln Community Center abuzz with activities for people of all ages, but especially those who have entered their golden years.

As Recreation Coordinator, Ignacio ensures that participants – the appropriate reference to folks who attend the events at 901 Brunswick St. —  get a deep sense of well-being, belonging and purpose, the same values he learned from his parents’ relationship with their own parents.

Ignacio sees to the provision of a safe and nurturing place for those who have retired and are looking for involvement.  Many who go to Lincoln are recently arrived from another country, seeking human connection as well as links to basic necessities, including fresh, hot and healthy meals.

Pretty literally he cooks up reasons to fill the 200 seats at the center’s cavernous hall five days a week.  Most mornings he can be found leading kitchen volunteers chopping vegetables or slicing meat for the day’s lunch.

For the Center’s recent holiday party that brought together the city’s diverse older population whose second language is English, Ignacio and his aproned crew dished out Wintermelon Soup and Arroz Valenciana. “You should try my sinigang,” Ignacio bragged over a plume of steam from a vat of simmering liquid.  The secret is “all about technique – you need a really good strainer,” is all he’s willing to share about his specialty.

“I learned to cook simply by watching, whether it was my dad or cooking shows like ‘Yan Can Cook.’  My interest grew much more after watching a lot of Iron Chef battles as well.   As for my sinigang recipe, most ingredients are the same for (basic) sinigang.”

The statement reveals much about the lifelong observer of people, particularly his elders.

“The best teacher is family,” he explains how he acquired skills for interacting with people thrice his age.   “You learn about patience from your parents and from your Lolos and Lolas, as well as your Titos and Titas.   Growing up as a Filipino we were always taught about respecting your elders: (whether you think what they were doing was) good or bad, right or wrong, you always treat your elders with respect.”

He had landed a Daly City job at the age of 19 paying attention to his older brother Bien Ignacio, who facilitated an after-school program that struck Angelo as fun.  Ending his education as a sophomore at San Francisco State University, Angelo had been working two jobs that bought him a condominium unit.  Five years later fulltime employment appealed, so when the coordinator position opened up in 2006, he applied for it.

Lincoln is one of the five community centers operated by Daly City when its Library and Recreation Services Departments merged in 2011; then-Assistant to the City Manager Joseph Curran took over as director in 2012.  The two centers hosting “active adults,” Daly City’s preferred term for individuals 60 years and older, are Doelger in the Westlake district and Lincoln further north off Mission Street.

Ignacio is responsible for staffing, scheduling and reporting for programs such as the Second Harvest produce distribution, school pantry, after-school snack distribution and the congregate lunch program for both Lincoln and Doelger Center.

On his watch, Lincoln started offering ping pong and revived ballroom dance, which have been popular, and Zumba, which did not last.  Last year he initiated a cooking program and in time for the holiday season, singing, with a full band that debuted along with a newly formed all-Filipino choir.

By his estimate, Lincoln is a “hangout, a place where people can just go to make friends, exercise, eat and even get their taxes done (with a laugh).”  True.  A licensed accountant comes in every year to help prepare tax returns.

This year marks Ignacio’s 14th year on the job, a span that has seen programs and supervisors come and go.  His biggest contribution has been his heart, he says with much conviction.  His current supervisor concurs.

“Angelo is a dedicated worker with a stewardship approach to leadership.  His efforts to build strong relationships with patrons, fellow colleagues and outside agencies enables him to create a vibrant and engaging center that provides crucial and valuable service to the Lincoln community,” Jennifer Der, Senior Recreation Program Supervisor, told INQUIRER.net.

“His best qualities are working hands-on with staff and volunteers to make the Lincoln center and/or any program he oversees thrive.  He is always looking at ways to provide a variety of programming for the participants and strives to be as consistent as possible in service delivery.”

She noted Angelo’s beginnings as recreation program participant, which makes him a “great asset to our Recreation Division.”

Ignacio is happiest transforming a frown into a smile, a daily process on the job.

“There are multiple incidents where I am approached by a person that Is upset,” he cites an example.  “The person might yell and call me names, but I don’t take things personally.  I first do my best to understand why the person is frustrated and find the best solution to calm the person down, apologize if something causes them to be upset and then try to help them with what they need done.  If you can assure that help will be provided, they usually calm down.  Sometimes people surprise you with how kind and appreciative they become.”

He counts “helping people in need” as the best part of the job.

“To see (myself make) people happy and getting paid to do that is very rewarding,” he said, wishfully thinking “more funding and more space to create more programs catered to all individuals” would take services to a higher level.

One participant says Angelo has a direct style that is “more American than Filipino.”  Another said he could mingle more with older adults beyond introductions.

“Actually, I’m shy,” Ignacio reacted to the comments, “I like to stay behind the scenes.”

Had his application been rejected in 2001 he might have poured his energies into electronic media, developing video games or influencing social media.  He entertains the possibility of being a venture capitalist as an extension of his desire to help others fulfill their dreams.  The food industry is another venue close to his sights. For now his focus is on Lincoln and his family.  He and wife, Barbara Yim, are parents to Anelisa, 12, and Benjamin, 4, who are growing up the way their father did.

“My actions set an example of respect and I talk to my kids often about their school and their friends. When something upsets them I teach them how to understand, depending if it’s right or wrong, and whether to forgive or to stand up for themselves,” he said.  “My daughter addresses my dad and mom as Grandpa and Grandma, and my stepdad as Honey because that is what my mom always calls him.  My son addresses my parents as Grandma, Grandpa and Papa John.”

Angelo is among US-born Filipinos who take pride in their ancestry and culture.  His paternal grandparents had passed when he was born, but he grew up with the Marcelino Vera, father of his mother, Evanina Pawloski.

“The relationship we had was rather quiet, but there were times where we just did a lot of walking, sometimes to the park/playground.  My Lolo and I didn’t talk much, but we both shared a passion for wrestling when I was young and making merienda together.”

Advocacy for people in their golden years is changing with the times.  The term “senior,” for example, is now perceived as negative for stoking stereotypes, according to the San Francisco Reframing Aging Campaign Master Plan for Aging.  “Older people” is the proposed reference that is “more neutral.”

Ignacio embraces the new term: “When I hear ‘older adults,’ I think about the term literally as the people of that age are just older (than I), but they can still do the same things as I do myself.  In this modern day many older adults I’ve seen are aging gracefully and are full of energy.”

He can congratulate himself for having much to do with that outcome.