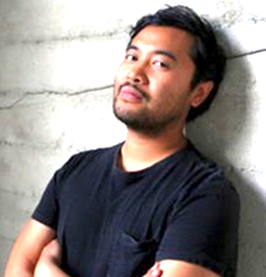 NEW YORK — Scratch the news, I wrote in my 2005 book, and chances are you will find a Filipino American.

Therefore, it came not much of a surprise that when the iconic iPhone celebrated its 10th anniversary on June 29, we learned that a Fil-Am was among its dozen creators.

Freddy Anzures, a Carnegie Mellon alumnus, is a designer in the Human Interface Group at Apple, the team responsible for creating the Mac OS X and the iPhone, according to the school’s website. The “slide to unlock” sound is said to be his contribution to the iPhone design.

“I was lucky to be in the right place at the right time. To be one of the chosen few involved in the creation of such a revolutionary product was truly an honor,” Anzures said during a campus talk at his Alma Mater.

Anzures was among the 10 fellows who traveled to the Philippines as part of the 2015 Filipino American Youth Leadership Program (FYLPRO) immersion program. Fellows get to interact with the country’s government officials and leaders and deepen their understanding of Philippine political, social and economic issues. He said he is interested in building relationships with art, design and music professionals as well as cultural institutions in the Philippines.

“FYLPRO will allow me to create a bridge between Silicon Valley and the Philippines, which could result in a better understanding of how technology could help Filipino culture and community progress,” he said in a statement.

“I intend to use my leadership skills as a role model for other Filipinos and Filipino Americans to aspire towards affecting change through advances in technology and future concepts of life, work, and communication.”

In an interview with the Chinese Journal of Design (CJD), Anzures retraced his steps — from Carnegie Mellon where he graduated in 1999 with a Bachelor of Fine Arts degree in Industrial Design – until he landed at Apple where he is currently a designer but prefers to be known as a “creative problem solver.”

With one more year to go in school, he interned at Frog Design in San Francisco and worked in its digital media design group.

“I interned there for six months. For the first three months I did shoe design,” he told the magazine.

He would return to Frog after graduating and work there for five years designing a variety of products.

Anzures is also a music and sound technology buff, and this other passion of his would play an important role in the design of the iPhone product. The “slide-to-unlock” sound is reported to be an audio of his high school locker opening and closing.

Worked as a DJ

While at Frog, he worked nights as a DJ in a bar where he met a lot of digital creators from Google, Apple and throughout Silicon Valley. One of the executives he met was the manager at Apple’s Human Interface Group. He joined Apple in 2004.

He told the magazine, “I didn’t know when I was in Carnegie Mellon that I was going to be working on iPhone, because there was no iPhone (then).”

Conceding the popularity of iPhone among young people, Anzures said younger people are more embracing of new technology. At the same time, he stressed that “you can make new technology not scary to people.”