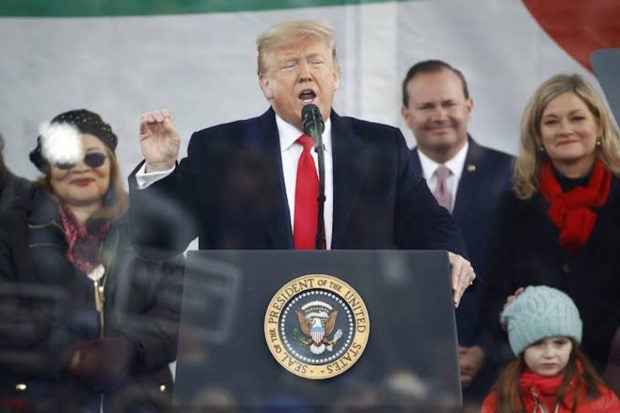 President Trump speaking at the March for Life rally on January 24. AP PHOTO

Catholic convert Nellie Gray (1924-2012) initiated the first March for Life, held on January 22, 1974, in the Capitol. Then, all of a sudden, it seems the American pro-lifers have discovered a collective resounding voice in the annual March for Life, which is actually a rally protesting both the legality and practice of abortion. The March for Life is scheduled, more or less, near the anniversary of the 1973 decision of the Supreme Court on Roe v. Wade legalizing abortion nationwide.

Ronald Reagan vowed to help “end this national tragedy” in 1987, pertaining to the legalization of abortion. “But I am not a Republican, and I’m not a Democrat,” remarked St. Louis Archbishop Robert J. Carlson in this year March for Life. “My job is to be a teacher of the faith and then to walk the talk.” More than a polarizing political concern,

In their November 2019 General Assembly, the US Catholic bishops agreed to promote abortion is first and foremost a moral issue, a grave matter regarding good or evil.

climate emergency. Yes, and they would promote it more aggressive. However, they made it clear that, although it is an important issue, global warming is not urgent. For them, abortion is both important and urgent – hence, a PREEMINENT PRIORITY. “We cannot dismiss or ignore other serious threats to human life and dignity such as racism, the environmental crisis, poverty and the death penalty,” the American prelates stated. “But abortion is the most urgent.”

The March for Life is a global event realized domestically, a.k.a. Walk for Life, Run for Life, or Bike for Life. In any given country, the event is both a provocative and a symbolic stand of global citizens regarding the inalienability of human rights. Rights are inviolable, of course, because they innate and intrinsic in the very nature of every human person, of every citizen. The March for Life, therefore, has become a celebration and a proclamation that human dignity and human rights are divine gifts endowed from the moment of conception, and that when rallyists shout about “every citizen,” it means not just the regular guy but also the unborn child, a sick man in a home for the aged, all junkies languishing in jail, and the prisoner on death row.

In South Africa, the 2012 National March for Life saw pro-lifers braving the worst of weathers in order to publicly decry the Abortion Law signed in 1997. In Down Under, 200,000 pilgrims, mostly young people, joined the Walk for Life as part of the 2019 World Youth Day in Sydney. Also last year, the 22nd National March for Life drew thousands in Toronto, included eight Catholic bishops and the Papal Nuncio Archbishop Luigi Bonazzi, to mark the 50th anniversary of the legalization of abortion in Canada.

In the Philippines, thousands of pro-life advocates marched for Our Lady and the Filipino family on the Solemnity of the Immaculate Conception on December 8, 2019. Two years ago, in February 2017, thousands of Filipino Catholics also participated in the Walk for Life prayer rally marched in denouncing extra-judicial killings and President Duterte’s plan to reimpose death penalty.

“Human rights are not a privilege conferred by government,” wrote Mother Teresa, in her amicus brief filed before the U.S. Supreme Court in February 1994. “They are every human being’s entitlement by virtue of his humanity. The right to life does not depend on the pleasure of anyone else, not even a parent or a sovereign,” she added. “You must weep that your own government, at present, seems blind to this truth.”

In the ultimate sense, human rights are universal because they flow from one universal human dignity. They are intrinsic to human nature because God put it there, which means no government on Earth can legislate against. Of these the right to life is the most fundamental, for what are we going to do with our human rights to work, to vote, to be educated, to peaceful assembly, to reform oneself, et cetera, when we are deprived of our basic right to life.

The Holy Book wonderfully reminds us of the story of a noble being, Adam, who is fashioned in the “Divine image and likeness,” with intellect, free will, immortal soul, human dignity, and human rights. And God commanded: “Thou shalt not kill!” and inscribed it in the hearts of all men and women of goodwill.