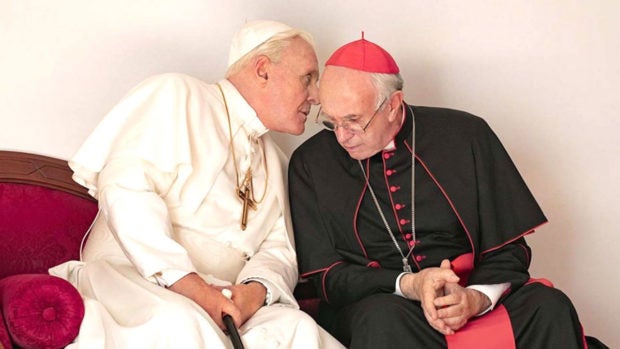 A scene from Netflix’s “The Two Popes.” NETFLIX

According to the Vatican’s pontifical annual report called Annuario Pontificio, a total of 266 popes in succession governed the Catholic Church, from St. Peter the Apostle to Francis. Along the 2,000 long years of the papacy, there appeared anti-popes who fervidly claimed to be the real popes. The worst happened between 1378 and 1417, in the so-called Papal Schism, when three popes ruled the Church simultaneously, each claiming to be the true pope, and each excommunicated one another.

One papacy with its own college of Cardinals was in Avignon, France, another one in Rome, and the last one in Pisa, Italy, all existing at the same time. Because it was an extraordinary time that needed extraordinary means, the Council of Constance (Germany, 1414-1418) solved the problem of the Papal Schism. The Council declared the papal claimants resigned and elected Pope Martin V, thus ensuring the continuity of one line of the Apostolic Succession.

Thirteenth century historian Martin of Opava had included Pope Joan, a female pontiff who allegedly reigned in the AD 850s, on the official list of Catholic popes in his work Chronicon Pontificum et Imperatorum. Hollywood in 2010 expounded the legend of a pregnant pope in a movie “La Papessa,” because people were curious and excited, and billed it as “a true story.” Even then, the authenticated and verified list tells us that no woman pope ever existed! The legend of Pope Joan is what it was, a legend.

One lesson the Netflix viewers learned without difficulty from the 2019 film “The Two Popes” is that there is only one pope. A check of history will inform us that, on the last day of February 2013, Pope Benedict met with the College of Cardinals in the morning and in the afternoon he was gone. He flew by helicopter to the papal summer residence of Castel Gandolfo and stayed there. The next thing we heard was that he transferred to his permanent retirement home, the Mater Ecclesiae monastery in the Vatican May 2, 2013.

It’s not the first time that a Vicar of Christ resigned. Pope Saint Celestine V, a Benedictine monk, was seated in the Chair of Peter for only after five months – and he reigned, resigned, and retired in the same year of 1294. He fled Rome and went back to his hermitage in the hills of central Italy and Apulia. In this kind of personal decision, the question of health and mortality seems to come into play, and the mortal man’s desire to be alone with the Immortal God has become a force too strong to resist. The German pontiff decided to abdicate the papacy, meaning, to renounce power when it’s time to renounce it.

Ever since that fateful last day of February 2013, the day of his resignation, Benedict XVI is called Pope Emeritus, ceased wearing red papal shoes, and continued to wear the white cassock but without the tufted fascia or the pellegrina. Most of all, Benedict discontinued using his official Fisherman’s Ring.

Benedict XVI made his first public appearance one year later, on February 22, 2014, to attend the first consistory of his successor Pope Francis. In that consistory, 19 Cardinals were created, including the Filipino Archbishop Orlando Quevedo, OMI, of Cotabato. In that solemn occasion, Benedict XVI entered St. Peter’s Basilica in an inconspicuous manner and was seated in the front row with other cardinals. He took off his zucchetto when Pope Francis came down the nave of St. Peter’s Basilica to greet him.

Cardinal Bergoglio’s election was valid because Benedict’s resignation was valid. Consequently, there is only one pope today, who is Pope Francis, elected on March 13, two weeks after Benedict resigned on February 28, 2013.

In that aspect, the Netflix 2019 film is historically correct. Benedict and Francis are “The Two Popes” in succession, which makes the Annuario Pontificio equally correct, which in turn tells us that a total of 266 popes governed the Catholic Church, from St. Peter to Francis, without breaking the Apostolic Succession.