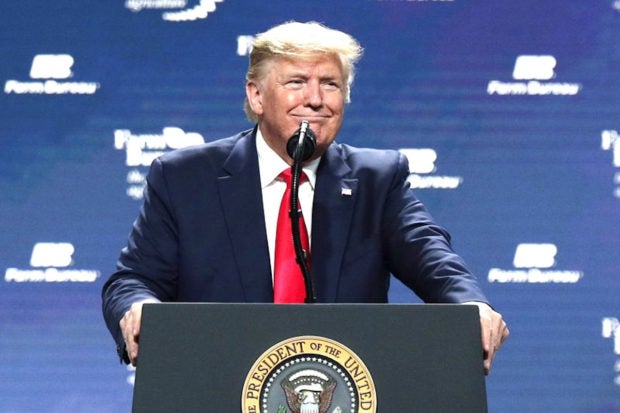 WASHINGTON— President Donald Trump’s defense against impeachment charges, as laid out in his legal argument released Monday, has distortions at its core.

Trump through his lawyers assails Democrats for trying to upend the results of an election, which is precisely the point of impeachment in the Constitution. The case asserts Trump committed no crime, a benchmark for impeachment that the Constitution’s authors avoided adopting in a well-documented debate.

A look at some statements by Trump and his legal team as opening arguments approach in the Senate impeachment trial:

TRUMP’s legal brief: “Anyone having the most basic respect for the sovereign will of the American people would shudder at the enormity of casting a vote to impeach a duly elected President. … House Democrats were determined from the outset to find some way — any way — to corrupt the extraordinary power of impeachment for use as a political tool to overturn the result of the 2016 election and to interfere in the 2020 election.”

THE FACTS: This is an odd reading of constitutional history. Removing a duly elected president is exactly the goal of the Constitution’s impeachment clause, not a perversion of it.

TRUMP, on Democrats who want witnesses to testify: “They didn’t want John Bolton and others in the House. They were in too much of a rush. Now they want them all in the Senate. Not supposed to be that way!” — tweet Monday.

THE FACTS: That’s false. Bolton, Trump’s former national security adviser, refused to testify. Democrats wanted him to. But they chose not to pursue a subpoena and risk an extended struggle in court. Bolton has signaled his willingness to testify at the Senate trial if he’s subpoenaed.

TRUMP’s legal brief: “The practical application of the Impeachment Clause by Congress supports the conclusion that an impeachable offense requires especially egregious conduct that threatens the constitutional order and, specifically, that it requires a violation of established law.”

THE FACTS: Egregious conduct, yes. But impeachment does not require a crime to have been commited.

The Constitution’s framers had a vigorous and well-documented debate over just that point.

Constitutional scholars say the grounds for impeachment and removal from office — “Treason, Bribery, or other high Crimes and Misdemeanors” — are a catch-all designed to redress any consequential abuse of power so long as that abuse hurts the country at large.

Months after the 1787 Constitutional Convention in Philadelphia, Alexander Hamilton explained in the Federalist Papers that a commonly understood crime need not be the basis of impeachment. Offenses meriting that step “are of a nature which may with peculiar propriety be denominated POLITICAL, as they relate chiefly to injuries done immediately to the society itself.”

To be sure, the commission of an actual crime can strengthen the hand of those seeking to remove a president, and the articles of impeachment against Trump do not accuse him of a crime.

Even so, the Government Accountability Office, a nonpartisan investigative arm of Congress, concluded last week that the Trump administration broke the law by freezing military aid to Ukraine that Congress had approved.

Its report said “the President is not vested with the power to ignore or amend any such duly enacted law.” The money was held up last summer on orders from Trump but released in September after Congress pushed for its release and a whistleblower’s complaint about Trump’s July call with the Ukrainian leader became public.

TRUMP: “Individuals who have stated for the record that they spoke to the President about the subject actually exonerate him. Ambassador to the European Union Gordon Sondland stated that when he asked the President what he wanted from Ukraine, the President said: ‘I want nothing. I want no quid pro quo.’” — Trump’s initial legal response, released Saturday by his lawyers.

THE FACTS: He omits key context on what Sondland told House investigators.

As one of the officials most deeply involved in trying to get Ukraine to do Trump’s bidding, Sondland testified that there was indeed a quid pro quo in the matter and “everyone was in the loop.” Specifically, Sondland said it was understood that Ukraine’s new president would only get a meeting with Trump in the Oval Office if he publicly pledged to investigate the Bidens and the Democrats.

“Was there a ‘quid pro quo?’ Sondland asked in his statement to the House Intelligence Committee. ”As I testified previously, with regard to the requested White House call and White House meeting, the answer is yes.”

Moreover, on the more serious matter of withholding military aid to Ukraine unless the country investigated Democrats, Sondland testified that a this-for-that explanation was the only one that made sense to him.

Testimony from other officials shored up the picture of a president and his associates systematically trying to get Ukraine to do what Trump wanted during a period when the military assistance approved by Congress was put on hold without explanation.

TRUMP: “House Democrats ran a fundamentally flawed and illegitimate process that denied the President every basic right, including the right to have counsel present, the right to cross-examine witnesses.” — response to impeachment charges Saturday.

TRUMP: “‘We demand fairness’ shouts Pelosi and the Do Nothing Democrats, yet the Dems in the House wouldn’t let us have 1 witness, no lawyers or even ask questions.” — tweet on Jan. 13, referring to House Speaker Nancy Pelosi.

THE FACTS: Not true. The House Judiciary Committee, which produced the articles of impeachment, invited Trump or his legal team to come. He declined.

Absent White House representation, the hearings proceeded as things in Congress routinely do: Time is split between Democratic and Republican lawmakers to ask questions and engage in the debate. Lawyers for Democrats and Republicans on the committee presented the case for and against the impeachment articles and members questioned witnesses, among them an academic called forward by Republicans.

The first round of hearings was by the House Intelligence Committee and resembled the investigative phase of criminal cases, conducted without the participation of the subject of the investigation. Trump cried foul then at the lack of representation, then rejected representation when the next committee offered it.