US immigration 2020 – what’s in store for Filipinos, other immigrants 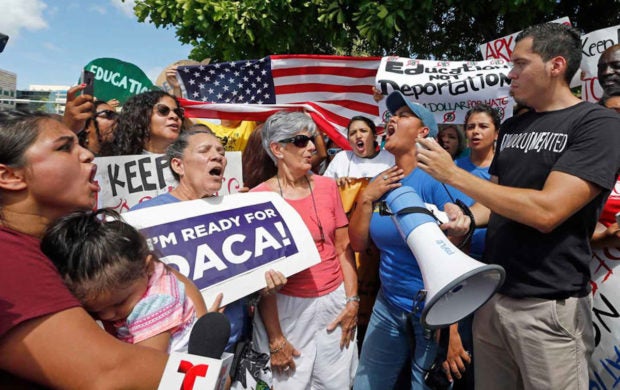 In this file photo immigration rights activists rally against Trump’s proposed immigration policies in Doral, Florida, on August 8, 2017. The Trump administration is trying to execute stiffer policies in 2020. AP PHOTO

The year 2020 is a Presidential election year. Whether the United States will have a new or a re-elected President, immigrants and their families will be facing major changes in immigration policies. Let’s examine the prospects for 8 major immigration policy changes that may affect Filipino immigrants.

The FWVP program was created in June 2016 in recognition of the extraordinary contributions and sacrifices of Filipino veterans during WWII. This program allowed their family members to join the veterans or their widows in the U.S. while their visa petition is waiting for visa availability.

After 3 years, hundreds of family members were allowed in on parole under the FWVP program. But as part of the current administration’s policy to eliminate parole programs, the USCIS announced in August 2019 that it would terminate the FWVP.

Advocacy groups like the Asian American Advancing Justice, FilVetRep and the Bayanihan Equity Center, among others, have been working hard to preserve the program. This 2020, unless the administration changes its mind,  FWVP program will be terminated after USCIS issuance of its final rules.

In November 2019, USCIS announced fee increases on petitions and applications. Among the many applications that are going to be affected are (1) Adjustment of Status application, an increase from $1,225 to $2,195; (2) DACA fee will increase from $495 to $765, an overall increase of 55 percent; (3) Naturalization application fee will increase by 83 percent, from $640 to $1,170. Aside from the increase in fees, USCIS is eliminating fee waivers for naturalization, adjustment of status, green card replacements and renewal, and employment authorization. The increases will take effect this year, only after USCIS releases its final regulations.

As of November 2019, there are 291,392 approved visa petitions on behalf of Filipino nationals filed by their US citizen or green card holder relatives awaiting visa availability with the National Visa Center. The backlog is still severe and the wait is still lengthy for visa availability in certain preference petitions.

There are bills (RELIEF Act, S.2603 and H.R. 5327) pending before the 116th Congress that, if passed, would increase visa numbers and eliminate backlogs. Until these bills are passed into law, expect decades of waiting for certain petitions on behalf of Filipino nationals.

On January 9, 2020, USCIS released its regulations on the registration system for H1B visa petitions. Instead of filing a full petition for a foreign national employee, the U.S. employer must complete a registration process that requires basic information about the H1B employer and the employee being petitioned. USCIS will open registration period from March 1 through March 20, 2020. Only those selected by the sUSCIS lottery system will be able to file H1B petitions to meet the 65,000 cap.

Under the law, a visa applicant will not be allowed to enter the United States if the government believes that they are likely to become public charges or reliant on government assistance. In 2019, the USCIS issued a new definition of “public charges” to include those who receive either cash or non-cash benefits, like housing or health care, from the government for more than 12 months during a 3-year period.

The implementation of this redefined public charge rule is suspended because of court litigation filed by several States and advocacy groups challenging its legality. The Supreme Court is expected to rule on this case this 2020. If the public charge rule takes effect, the legal impact will be on low-income legal immigrants petitioning for their relatives.

Deferred Action on Childhood Arrivals or DACA program was created in 2012 to grant undocumented immigrants who were brought to the US as children deferred status and employment authorization. In 2017, Trump announced that it was ending DACA. This resulted in several lawsuits filed against the administration, challenging the decision to terminate DACA. The case was heard by the Supreme Court in November 2019 and a decision is expected any time before June 2020. In the meantime, DACA recipients are allowed to renew their DACA status and employment authorization.

Beginning October 1, 2020 federal agencies including DHS and TSA will only accept state- issued driver’s licenses that are REAL ID compliant. This means that the state licensing agency must issue REAL IDs to those with valid identification and legal status. Those who are still in unauthorized status may not be issued READ ID compliant driver’s licenses and identification that would allow them to access federal offices or travel domestically by commercial airlines.

In January 2019, nationals from the Philippines are banned from receiving H2B temporary working visas for one year. As of this writing,  there is no update from the USCIS if in 2020 the Philippine nationals would be allowed to become beneficiaries of new H2B visas.

These eight immigration policies are just among the many that are anticipated to affect the Filipino immigrant community. The strict enforcement of immigration law has consistently been the highest priority of the Trump administration, resulting in hundreds of thousands of ICE arrest since he took office as U.S. president.

After a decade, we still have not seen a major overhaul of immigration law. Hopefully, this 2020 decade, US leaders will finally pass a more humane and sensible immigration reform law — more compassionate, relevant and rational to replace the dysfunctional immigration system we have right now.

(Atty. Lourdes Santos Tancinco,  is an immigrant advocate, founder and a principal partner at the Tancinco Law Offices, San Francisco CA based law firm. She may be reached at 1 888 930 0808, [email protected] , facebook.com/tancincolaw, or through www.tancinco.com)