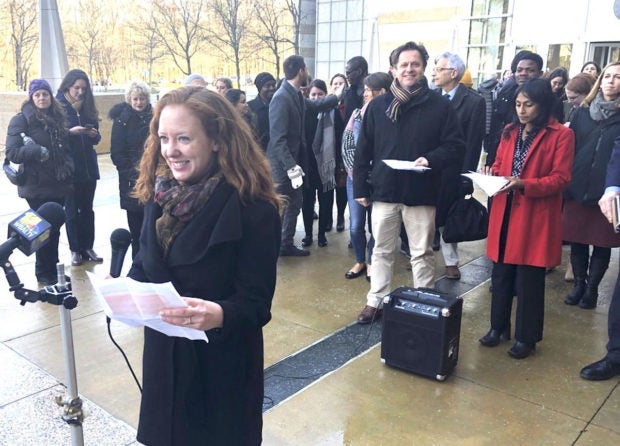 In this Wednesday, Jan. 8, 2020, file photo, Linda Evarts, an attorney for the International Refugee Assistant Project, speaks to the media outside the federal courthouse in Greenbelt, Maryland. A federal judge agreed Wednesday, Jan. 15, 2020, to block the Trump administration from enforcing an executive order allowing state and local government officials to reject refugees from resettling in their jurisdictions. AP PHOTO

SILVER SPRING, Maryland — The Trump administration can’t give state and local governments the “veto power” to reject refugees from resettling within their borders, a federal judge ruled Wednesday.

U.S. District Judge Peter Messitte agreed to block the Trump administration from enforcing an executive order requiring resettlement agencies to get written consent from state and local officials in any jurisdiction where they want to help resettle refugees beyond June 2020.

In his 31-page ruling, Messitte said the agencies are likely to succeed in showing that November’s executive order is unlawful because it gives state and local governments veto power over the resettlement of refugees. The judge issued a preliminary injunction requested by three national agencies that sued to challenge the executive order.

Agency leaders say the executive order effectively gives governors and county leaders a veto in the resettlement process. The agencies also argue the order illegally conflicts with the 1980 Refugee Act.

“Refugee resettlement activity should go forward as it developed for the almost 40 years before the (executive order) was announced,” he wrote.

Church World Service, Lutheran Immigration and Refugee Service and HIAS — a Jewish nonprofit — filed the lawsuit in Greenbelt, Maryland, on Nov. 21. They are three of the nine national organizations agencies that have agreements with the federal government to provide housing and other services for refugees.

Texas, which took in more refugees than any other state during the 2018 fiscal year, became the first state known to reject the resettlement of new refugees. Gov. Greg Abbott said in a letter released Jan. 10 that Texas “has been left by Congress to deal with disproportionate migration issues resulting from a broken federal immigration system.”

The head of Lutheran Immigration and Refugee Service, Krish O’Mara Vignarajah, said the ruling for now puts on hold a policy that was causing “irreparable harm to refugee families and resettlement agency’s already. “ She added that it essentially reopens the door for now to refugees being resettled in Texas.

“It’s a significant day in which the rule of law won,” O’Mara Vignarajah said.

At least 41 states have publicly agreed to accept refugees, but a governor’s decision wouldn’t preclude local officials from refusing to give their consent. For instance, the Democratic mayor of Springfield, Massachusetts, has refused to give written consent for refugees to be resettled in the city.

Trump’s order says the agencies were not working closely enough with local officials on resettling refugees and his administration acted to respect communities that believe they do not have the jobs or other resources to be able to take in refugees. Refugees have the right to move anywhere in the U.S. after their initial resettlement, but at their own expense.

Justice Department spokesman Alexei Woltornist declined to comment on the judge’s ruling. The State Department said it is reviewing the decision and has no immediate comment. John Wittman, a spokesman for Gov. Abbott, did not immediately respond to messages seeking comment on Wednesday’s ruling.

Ali Al Sudani, chief programs officer for Interfaith Ministries for Greater Houston, said many refugees were anxious after Abbott’s announcement. One Iraqi man contacted Al Sudani to say that he was in the process of being approved to go to Texas and asked whether he should request another state instead.

“It’s great news, but we don’t want this to polarize different communities even further,” Al Sudani said. “I hope and wish that everyone would come and see the fact that this is the right thing to do.”

During a Jan. 8 hearing, Justice Department attorney Bradley Humphreys said the Refugee Act gives the president “ample authority” to make such a change.

“Why change it now?” Messitte asked. “Is it purely a political thing?”

Humphreys said the executive order is designed to enhance the involvement of state and local officials in the process of resettling refugees. But he insisted it doesn’t give them a veto over resettlement decisions.

Messitte said it “borders on Orweillian Newspeak” for the administration to claim that the order is meant to merely “enhance the consultation” between the federal governments and the states and localities.

“It grants them veto power. Period,” he wrote in his order.

And giving that veto power to the state and local governments “flies in the face of clear Congressional intent,” the judge concluded.

The Trump administration has capped the number of refugee admissions at 18,000 for the current fiscal year. About 30,000 refugees were resettled in the U.S. during the past fiscal year; between 150,000 and 200,000 remain in the pipeline for possible U.S. resettlement while they live abroad, according to Linda Evarts, one of the plaintiffs’ attorneys.