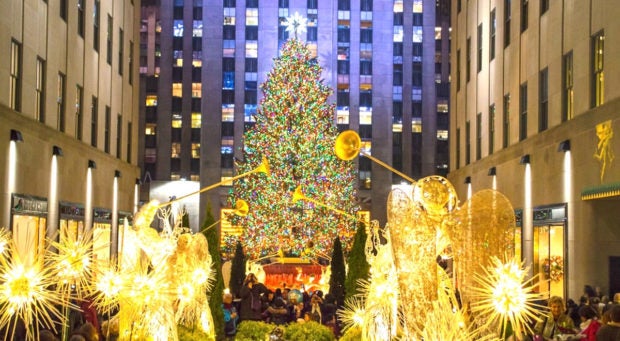 The Voice of Friendship Singers performed in the finale Friday, December 20, followed by the Antigone in Ferguson Choir at 7 p.m.  Ten choral groups were invited this year.

The group performed under a 77-foot high Norway Spruce Christmas Tree at the world-famous Rockefeller Center, also known as “The Rock,” a national historic landmark in the heart of Midtown Manhattan between 48th Street and 51st.

it will be like singing the old-time favorite song “Holly, Jolly Christmas” this season. “It’s the best time of the year,” says of Voice of Friendship Singers.

‘Opportunity of a lifetime’

According to Joan Cayabyab, one of the group’s core members, they were first invited in August 2019 to be part of a choral performance, by Holly Hunter, producer-director of National Sawdust Projects and Community Engagement of the production team of “The Gauntlet,” an “immersive site-specific choral and movement piece” created by Sxip Shire and choreographer Coco Karol.

At the time, however, they had to decline the opportunity because of a conflict in the group’s schedule. The opportunity knocked at their doors again in October when Hunter was curating a selection of choirs to perform at the Rockefeller Center iconic Christmas tree. 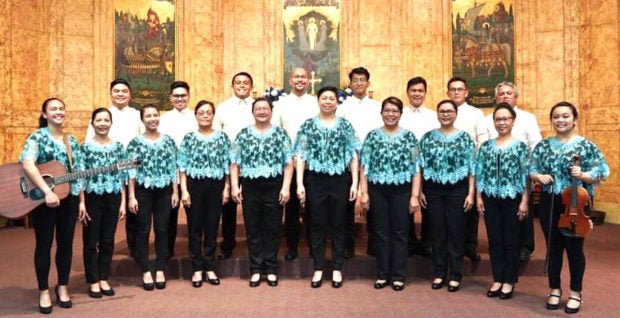 The Voices of Friendship Singers in one of the churches in Queens, New York. CONTRIBUTED

“It was an opportunity of a lifetime!” exclaimed Cayabyab and said that they accepted the invitation as soon as their singers confirmed their availability.

A preview of the group’s repertoire was heard during the first night of the Simbang Gabi held at the Philippine Center on December 5, at Fifth Avenue, which is a few blocks away from the Rockefeller Center. Dressed in their regal Filipino attire, they rendered popular Filipino Christmas songs, which the audience loved and sang to the tunes.

The choir sings sacred, secular, inspirational, pop, ballad, folk and many other genres. They often sing a capella in a semi-circle, which is a Philippine Madrigal trademark, Cayabyab said. They perform all year round, with two to three benefit concerts each year with a different purpose.

Cayabyab said the group’s mission is “to serve God, inspire others, and reach out to those in need through music.”  Marvin Gayatgay, a Philippine Madrigal Singers alumnus, is the choirmaster

In the past five years, the choir has performed at multiple benefit concerts in different parishes around New York City.  It is a member of the Madz Et Al, a network of choirs led by members and alumni of the world-renowned Philippine Madrigal Singers, also known as The Madz.

Prior to becoming The Voice of Friendship Singers, the original group’s name was “Our Lady of Consolation.” It was composed of 6 couples and a 6-year old girl who played the violin. The group was brought together by a small band of family and friends who had the same passion for singing and serving in a Filipino mass.

In 2014, Gayatgay joined the Holy Family Church choir where he met Oscar Villacrucis, a member of the HFC. Villacrucis introduced him to members of different choirs in the community and met members of the Our Lady of Consolation choir. Through his tutelage the group became known as “Tinig ng Pagkakaibigan.”

Gayatgay was with the Philippine Madrigal Singers’ batch that won the prestigious European Grand Prix for choral singing. He handled the POEA choral group and the Sampaloc Adventist Choir. He has also done choral coaching.

“The foundation of the group is anchored on friendship,” Cayabyab said. They eventually changed the name to The Voices of Friendship Singers.

As present, the group is composed of 18 members from varying age groups. “We are a mix of students and working professionals from different fields–medical, financial services, construction, administration and a few others. It is managed by Gayatgay, Cayabyab and Lurleen Garcia.

Most of their members are from Queens and Long Island. Many have had choir experience prior to joining the group. Their first concert was at the Our Lady of the Sorrows in 2015. Cayabyab said that their audience was amazed with their performance. “Having been trained by a Madrigal, the singing technique, discipline and decorum were noticeable,” she said.

They serve at the St. Joan of Arc’s Filipino Mass every 3rd Sunday of the month, in Jackson Heights, New York. They are affiliated with Our Lady of Lourdes, Our Lady of the Snows, Holy Family Church, St. Nicolas Tolentine, and St. Robert Bellarmine.

The group is a not-for-profit organization and its members are not paid to sing. However, they accept donations to purchase musical instruments, costumes, music scores and other needs of the choir.