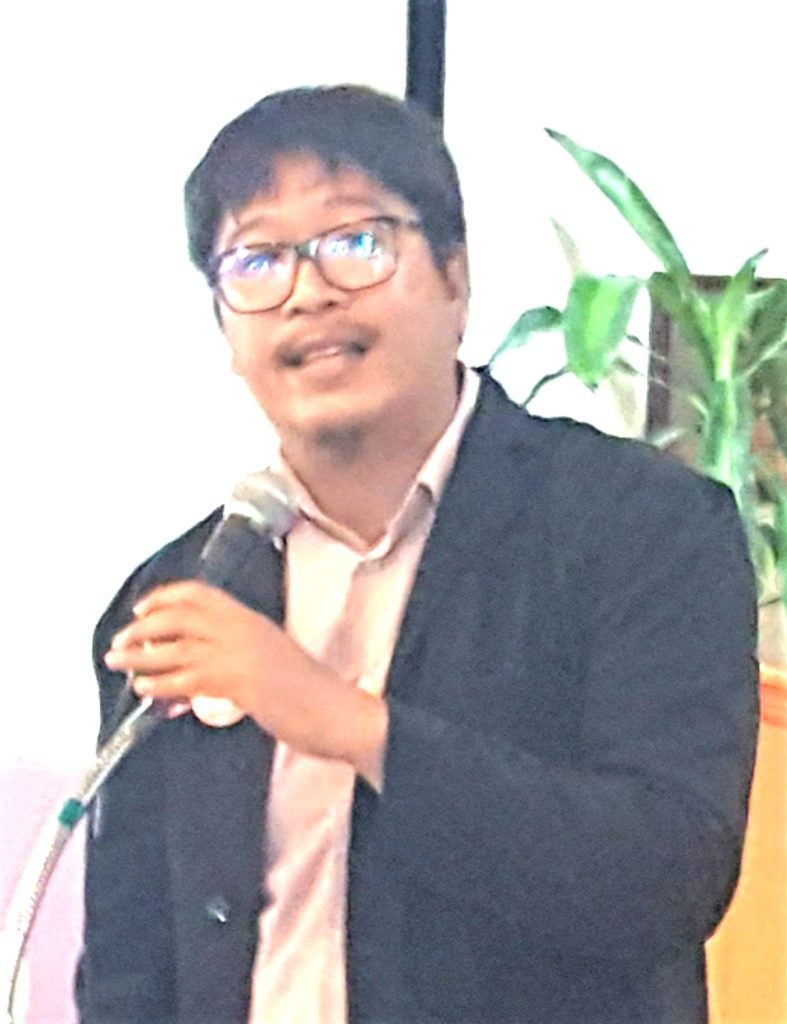 In Defense of Human Rights and Dignity Movement (iDefend) spokesperson Ellecer Carlos is on an international tour to reach out to different Filipino communities abroad to inform them of the “human rights crisis” in the Philippines. INQUIRER/Jun Nucum

DALY CITY, California — Human rights advocates in the San Francisco Bay Area gathered in a local Methodist church to hear the spokesperson of a human rights coalition in the Philippines talk about the continued extrajudicial killing (EJK) of suspected addicts and pushers in the Duterte administration’s war against illegal drugs.

Concerned Filipino community leaders and members of the Filipino Americans Human Rights Alliance (FAHRA) listened intently as Ellecer Carlos, spokesperson of In Defense of Human Rights and Dignity Movement (iDEFEND), relate what his coalition says is a “human rights crisis” triggered by the government’s war on drugs.

iDefend is the largest human rights coalition in the Philippines made up of over 70 organization. Carlos is on international speaking tour. His stop at the Daly United Methodist Church came after speaking engagements in Europe. He will make his way to Southern California and other parts of the United States, speaking on “what’s happening on the ground” as the tally of assassinated drug war victims, mainly in poor communities, continue to increase. 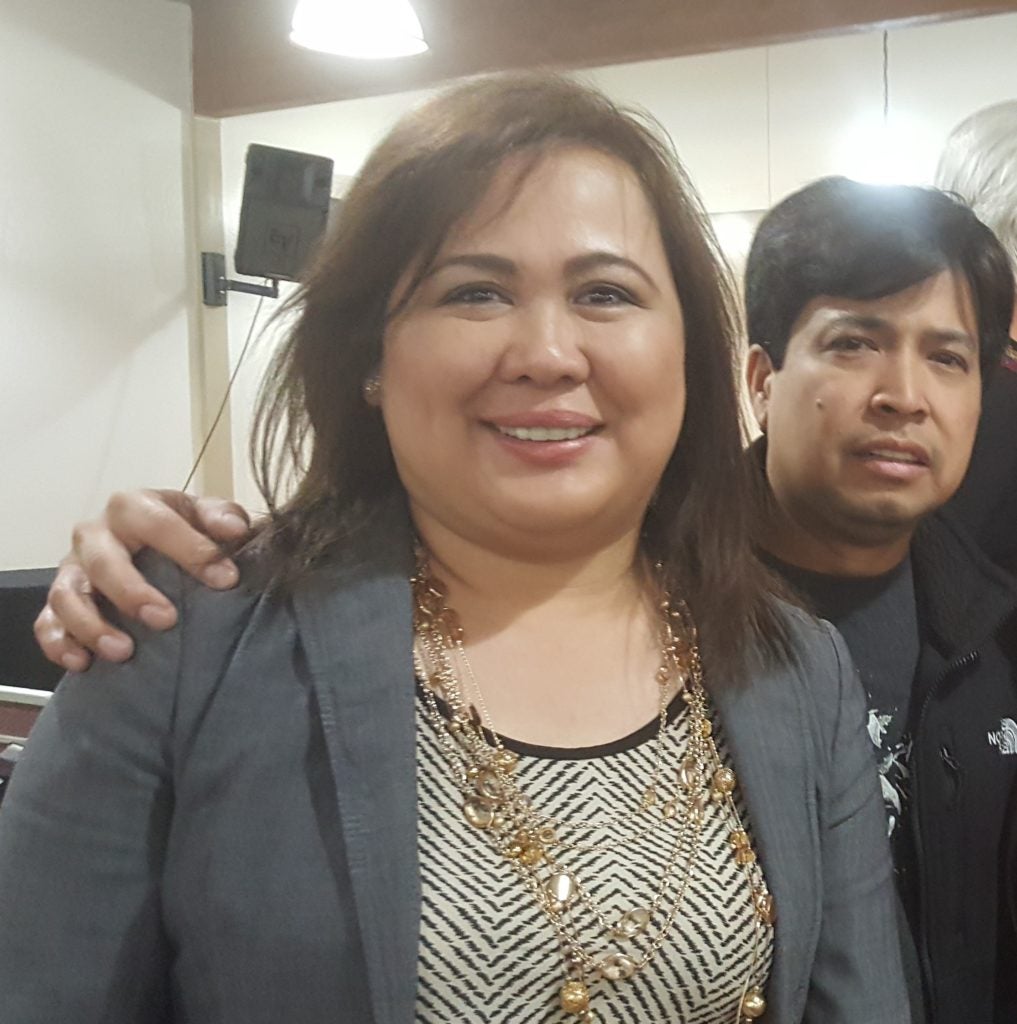 The Flores couple Joy (left) and Rene (right) say the forum has given them a better understanding ot the political situation in the homeland. INQUIRER/Jun Nucum

“This tour is part of our mission to reach out to different Filipino communities abroad to dispel the myths, the misperceptions that this administration has actually sown,” Carlos explains.

“This President still is able to operate on a very strong support base so it is important that we are able to reach out to Filipinos abroad because international solidarity is important in terms of countering the human rights crisis. This president is waiting for the right pretext to actually extend Martial Law nationwide,” Carlos warns.

Carlos added that their other objective is to reach important institutions like the United Nations, various missions in Geneva as well as the European Parliament, the European Commission for the purpose of garnering support to put a stop to the violence in the Philippines.

“Here in the U.S., we are trying to engage with the U.S. Congress as well as reach out to Filipino community leaders so that we can organize, educate Filipinos here on what is happening to surface the truth so that we can again reclaim democracy and collective humanity in the Philippines. It is very concerning because basically a collective sociopathy is worsening as days go by that dehumanize us all. It has made human life cheap, very cheap in the Philippines,” decried Carlos.

Carlos revealed that the there is a planned investigation by the US Congress’ human rights commission, a special body that investigates human rights violations in various context all around the world, and that he was requested to testify on July 20, 2017.

“They are hoping that we can manage to actually transport families of victims of extrajudicial killings and key witnesses to help provide a clearer picture and evidence on what is happening in the Philippines. Of course, there is a proposed legislation SB 1055 of Senators Benjamin Cardin (D-Maryland) and Marco Rubio (R-Florida) filed at the U.S. Senate that will actually push for the respect, protection and fulfillment of human rights in the Philippines in response to the human rights crisis,” Carlos reported.

“There is also SB 659 of Senator Marco Rubio, a Republican, that seeks to address the issue of China’s alleged abuses in the South China Sea. China is being courted by President Duterte and has vested interest in the Philippines that threaten our sovereignty and the security of the entire region,” Carlos stated.

On alleged extrajudicial killings, Carlos said the number of killings of “the most impoverished beaten-down individuals in society” keeps increasing. The de facto social cleansing policy of EJK has allegedly led to the deaths of from 8,000 to 12,000 individuals.”

“The administration of President Duterte instead should be making available the requirements of a life of dignity — the democratization of essential services, opportunities, the equitable redistribution of the nation’s wealth as well as the radical social reforms that was promised by the EDSA revolution — essentially what the previous administrations were not able to deliver.

For rule of law, due process

“It is really we fighting for the rule of law, due process. If this continues, we feel that it will, threaten the mindsets of the entire Philippine National Police, transforming even the most decent law-abiding officers into butchers,” Carlos warned.

Carlos also clarified that it does not necessarily follow that if one is for human rights then he must be anti-Duterte, adding that the widespread myth in the Philippines is that human rights are being fought only for the criminals, a false belief that the president has actually effectively exploited. 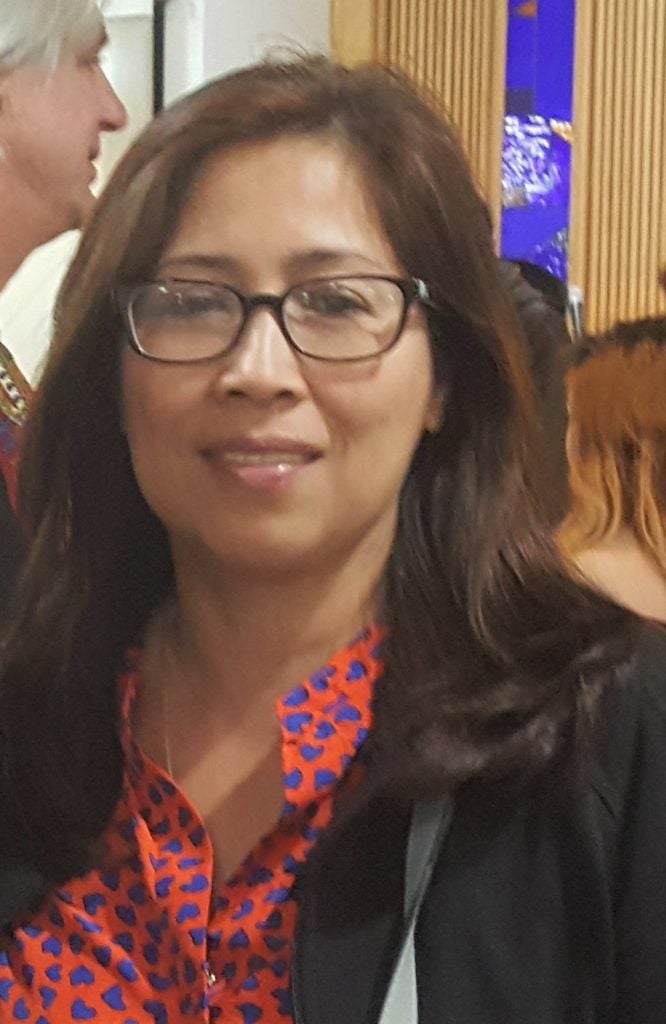 “Does he find joy in killing his own people who are victims of Chinese drug lords whom he sets free?” Ruby Flores asks of President Duterte. INQUIRER/Jun Nucum

“We are not against Duterte and not against the response to the issue of drugs and crime per se. We have not asked for his resignation. But we critique the violent method to which this president has chosen to respond to these issues. Essentially, human rights values, ideals and principles are very important in the democratic society. They are the highest tenets and ideals, which should be respected at all times. These are inalienable rights. And this president has actually consciously vilified human rights defenders, our commission on human rights, and effectively distorted these values by taking advantage of a disoriented Philippine public,” Carlos maintains.

“We have been in the forefront in pushing this government to stop the killing since day one. We criticize the death policies this president is pushing, including the forceful re-imposition of capital punishment as well as lowering of the minimum age of criminal responsibility from 15 to 9.”

Why not call for resignation?

Human rights lawyer Ted Laguatan urged Carlos and his group to reconsider their position and call for resignation to get Duterte out of power. Carlos explained that only a collective decision of the members of the iDefend coalition could change that position.

Laguatan was the one who earlier called for Duterte’s resignation on TV barely two months after Duterte assumed the presidency. He also predicted that Duterte would take the Davao Death squad on a national level and that Duterte will be using terrorism as an excuse to kill people.

“Duterte will never give up power because he knows that if he does, he would likely be indicted and tried in the United Nations International Criminal Court for his extrajudicial serial killings and other crimes against humanity,” Laguatan argued.

“He will likely look for more inexcusable justifications to declare martial law for the whole Philippines and eventually do away with presidential elections. Duterte using fear to intimidate and coerce people to consolidate and retain power is nothing new. Mussolini, Khadafy, Marcos, Stalin, Idi Amin and so many other murderous tyrants have done this.” 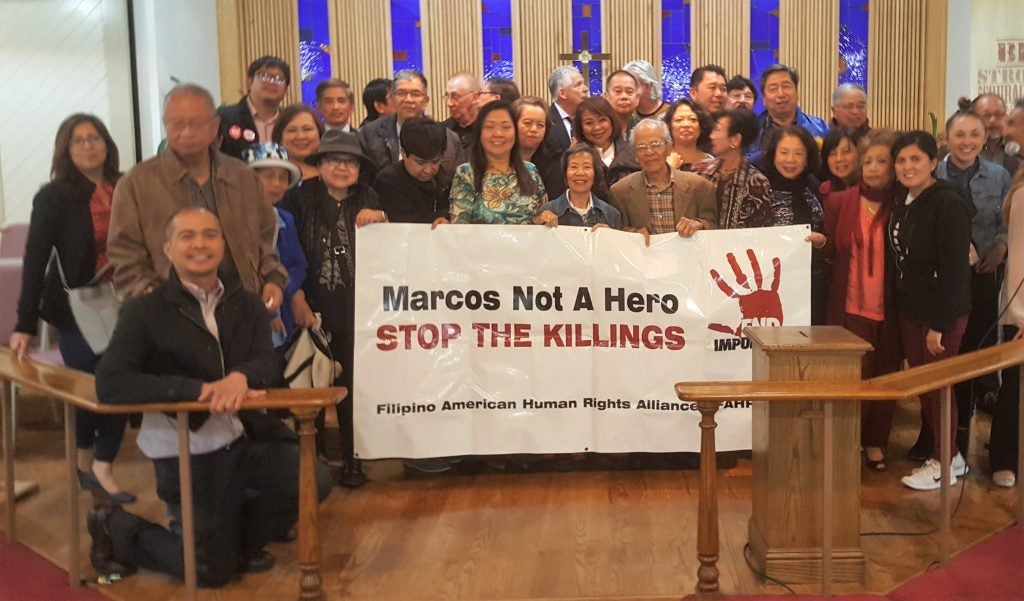 After the forum Ruby Flores said that Filipinos should be asking if President Duterte is sincerely looking after the welfare of his countrymen or if is he favoring China for his own selfish interest.

“Does he find joy in killing his own people who are victims of Chinese drug lords whom he sets free?” she inquired. “Duterte has lied on many occasions, he said things he denies having said later or makes a joke out of it. These actions are signs of an unfit leader. He sets a bad example to the younger generation.”

Rene Flores was sad to know that the war on drugs campaign has killed thousands of people without due process.

“It is even more frightening to learn that the poorest of the poor are being targeted. Never did we hear a drug lord has been killed, only apprehended and sent to jail for trial. The question is bakit pag drug lord binubuhay pero pag victim ng drugs pinapatay.  Nasaan ang justice?” wondered Rene. (The question is why are drug lords allowed to live while the drug victims are killed? Where is justice?”)

Rene Flores’ wife, Joy, thinks that Duterte should focus more on solving corruption than killing drug victims. “Obviously, his anti-drug tactic is not solving the drug problem. He promised in six months, the Philippines will be drug free, but instead, we ended up with thousands of dead victims and drug lords are free. I believe corruption is far most the biggest problem in the country. He should put more efforts in eliminating corruption and than eliminating his poor countrymen,” stressed Joy.