'War for the Planet of the Apes’ is epic myth-making

‘War for the Planet of the Apes’ is epic myth-making 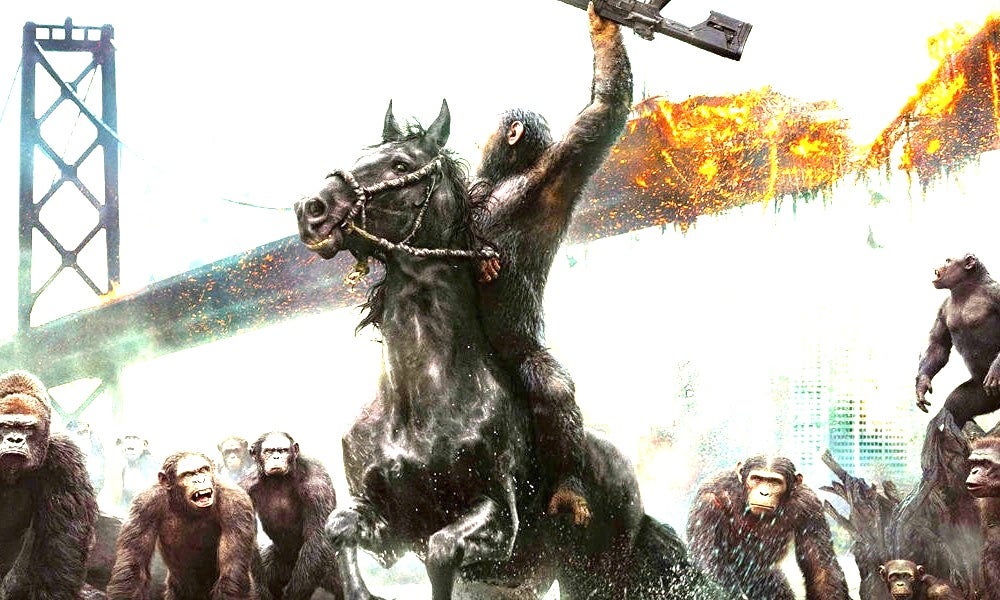 “War for the Planet of the Apes”

Fifteen years ago a scientific experiment gone wrong gave rise to a species of intelligent apes and a virus that nearly destroyed the human race. The Simian Flu, as it came to be known, brought humanity to the brink of extinction. The survivors, the few who were immune to the virus, came to envy the dead; while the apes continued to thrive in the safety of the woods north of San Franciso. With the “dawn” of their burgeoning civilization, the apes flourished in the absence of human contact, until they’re discovered by a small band of the desperate survivors striving to establish a new colony of their own.

The colonists and apes struggle to coexist. But their fragile peace is shattered by Koba (Tobby Kebbell), an ape who could not resist taking revenge on his former captors. Caesar (Andy Serkis), leader of the apes, attempt to restore order. But there is no turning back from the brutal fighting that has already begun. The embattled colonists sendout frantic distress calls for help, unsure if anyone is even out there to hear them. The signal is received 800 miles north at Joint Base Lewis-McChord, where hundreds of soldiers have taken refuge after the viral apocalypse. These men and women are all that remain of the US Armed Services.

Responding to the call, a hardened fighting division, led by the decorated Colonel J. Wesley McCullough (Woody Harrelson) of the Special Forces is sent down to join the battle. Caesar and the apes retreat to the woods, but the human forces pursue them, determined to destroy the apes once and fall. For two years, the soldiers have been searching in vain for Caesar, who’s rumored to be commanding his apes from a base, hidden deep in the woods.

As “War of the Planet of the Apes” begins, the ape community is broken up. Caesar is still trying to keep it together, but he bears the deep, painful burdens of a leader struggling to galvanize a divided people. Caesar has always been torn between the ape and human worlds. He does not want to see the destruction of either species. But he’s an ape, and their survival is clearly on the line. Then, Caesar experiences the worst moment of his tumultuous life and comes to the grim conclusion that human and apes will never be able to live together. It’s such a monumental journey that Caesar steps over a line into a world of revenge from which he seemingly cannot extricate himself.

Against every fiber in his body, he falls into a place of darkness and rage, a place he fears may be inescapable. After all he has seen, he has become sadder but also more desensitized; and he almost loses the better part of himself. Once, Caesar was an ape who would rather destroy guns than use them. But suddenly he starts to reconcile himself to the idea of using any means necessary to vanquish the humans, driven by his personal vendetta against the Colonel. Physically in this film, Caesar is much more upright and he uses his hands a lot more now; so he’s more like a human being in ape skin. But as his intelligence and abilities have grown, the things he feels and remembers have become more daunting to him.

“War” isn’t simply Caesar’s story; it’s the dawn of a civilization. What you see happening now will be part of a future mythology all the apes will know for all time. This film gives audiences more spectacle, more intensity, more humor and takes them on the biggest journey of the three moviesIn “War For The Planet Of The Apes,” the third and climactic chapter of the blockbuster trilogy, director Matt Reeves unleashes the rapidly evolving simians into a world boiling over with divisions and rage as the ape vs. human battle for control of the world careens towards the ultimate winner-takes-all decision.

In a flurry of mythic filmmaking, audiences witnesses the pivotal moment that determines the fate of human civilization forever, and be immersed in the ape leader Caesar’s emotional quest to lead his young society to a new home, even as a war between his belief in family and honor versus the lure of a vengeful reckoning churns within his soul.

Breathless action, big ideas and potent storytelling combine as “War For the Planet Of the Apes” pushes the series into new realms of legend-building as it explores the values that forge a civilization. The scale of this movie is huge. As the apes leave Muir Woods, they encounter a larger world. As the tide turns against homo sapiens, the film also for the very first time brings action into rugged, frozen mountains and a world of snow; all captured in spectacular 65mm.

“War” is part road movie, part war story, part Western and an epic adventure. Part of the thrill is the opportunity to bring new technology and new forms of cinema to classical myths, creating something unique for these times. The classic interplay of light and dark elements, of loyalty tested and courage found all come out in Caesar’s epic journey, in which he descends into the depths of anguish as he’s forced to weigh his personal dream of revenge for his own kin against the plight of his entire species facing possible defeat.

It’s totally surprising because no one would think Caesar is capable of anything approaching hatred or fully breaking ranks with humanity.  We know ‘The Great Apes’ are our closest cousins; they’re 97 percent the same as us; and yet we perceive this world of difference. Perhaps, by giving them a voice and seeing the world through their different eyes, we can stand outside ourselves and really see ourselves under the microscope as we haven’t before.