DACA beneficiaries could stay in U.S. for years

DACA beneficiaries could stay in U.S. for years 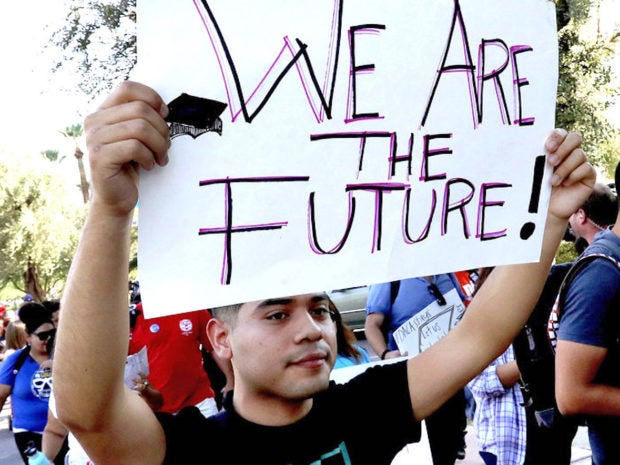 Supporters of Deferred Action for Childhood Arrivals protest in Arizona shortly after Attorney General Jeff Sessions announced that the program would be suspended. AP PHOTO

LOS ANGELES — While hundreds of thousands of immigrants with DACA permits await the Supreme Court’s decision on the future of the program, lawyers and immigrant advocates argue that the vast majority of them have sufficient legal rights to remain in this country for several years and maybe, indefinitely.

At a December 11 press briefing organized by Los Angeles County and Ethnic Media Services (EMS), experts urged immigrants protected by DACA, or who once had it, but did not renew it, to get immediate advice from the county Office of Immigrant Affairs or with any local organization regarding their legal rights, possible financial aid and process to extend their status.

“It is very important that immigrants with DACA renew the program as soon as possible,” said Judith Vásquez, representative of county supervisor Hilda L. Solís.

“We know that the federal government has announced its intention to raise the cost of the DACA fee from $495 to $765 and it is best that they renew now before that happens,” Vasquez added, pointing to the fact that Los Angeles County “has more immigrants covered with DACA than any other county in the nation, around 82,000 ”.

The experts added that in the event that the Supreme Court rules to end the program, the beneficiaries may still be able to stay in this country for several years, through new permits obtained before their DACA authorization ends and by fighting each case in court individually.

“We know that 95% of immigrants with DACA do not have a pending deportation order” said Daniel Sharp, director of legal services at the Central American Resource Center (CARECEN). “That means that if the Supreme Court allows the government to continue with the elimination of DACA, the vast majority of the beneficiaries are not in imminent danger of being expelled from the country.”

Sharp explained that “you have to wait for the best and prepare for the worst.”

The attorney was referring to the fact that some DACA holders had previous orders of deportation after being placed into removal proceedings before the benefit existed. When they were approved for DACA, they were momentarily protected from being removed per that order. But U. S. immigration authorities have the power to act immediately on an outstanding order of deportation, without further hearings or process.

But those who were never in removal have a fighting chance in the courts that are already seriously backlogged with pending cases, making their deportation a long-term prospect.

“DACA holders have the right to fight deportation and with the number of cases in immigration courts in Los Angeles, three years is the minimum that would take,” Sharp said.

Thomas A. Sáenz, president and general counsel of MALDEF (The Mexican American Legal Defense and Education Fund), said that despite many media predictions about a possible negative outcome for DACA in the Supreme Court, “there is no way to anticipate the result, moreover, it is irresponsible to do so. ”

However, he assured that even if the Supreme Court ruled against DACA (the decision should come before June of next year), young immigrants “will not be alone, there will be thousands of people supporting them and making sure they get their rights to fight deportation by all possible means. ”

MALDEF is representing 22 DACA holders from Texas in defense of the program, against a lawsuit by Texas and 6 other states that sought to dismantle the program. The civil rights organization felt the Trump Administration, a defendant in that lawsuit, would not adequately represent the interests of DACA holders and asked the court to interview, which was allowed.  That lawsuit is pending, and its resolution would depend on SCOTUS decision on the overall issue.

The bearers of DACA have the support of the community and of various organizations and institutions in Los Angeles.

Rigo Reyes, executive director of the Los Angeles County Office of Immigrant Affairs, outlined a variety of services for DACA holders and their families. “The county has taken concrete steps to protect and support immigrants,” Reyes said.

Along with legal help, financial assistance is also available to assist those who cannot pay the immigration fees. And the county is also responsible for compliance with minimum wage laws. DACA holders have work permits and are entitled to the same working rights as other workers.

Tiffany Panlilio, DACA legal advisor for Asian American Advancing Justice (AAAJ), said that DACA holders “are scared and often have to choose between paying rent and renewing the benefit,” but that there is support for them to do it.

“We want to ensure that DACA is still standing and that in my organization we have legal support in various languages: Chinese, Thai, Tagalog and Korean,” she added, noting that one in five DACA is Asian. She invited the community to go to a trusted organization to obtain free legal advice. “It is better to know than not to know,” she said.

Francisco Rodríguez, chancellor of the Los Angeles Community College District, reminded the community that there are “Dream Centers” in each of the nine colleges in the system, which has more than 230,000 students. There, young immigrants can receive legal assistance and mental health “in an environment free of hate and hostility”, he added.

“I am an immigrant and I have benefited greatly from public education,” Rodriguez said. “I invite undocumented students to enroll in our schools. I assure you that all your information is confidential, and we have taken steps to protect it.”

Meanwhile, criminal lawyer Lara Yeretsian reminded DACA beneficiaries that they have a lot to lose if they commit a crime such as driving under the influence (DUI). “Any mistake can have serious consequences, especially for DACAs,” said Yeretsian. “Do not take risks and always consult a lawyer who understands the immigration consequences of any criminal conviction.”

One entrepreneur and one activist are two examples of young immigrants who have used DACA and the work permit it granted them to build a productive life that benefits many others, as well as them, in their community.

Nestor and Rocio hope that the final decision of the Supreme Court on DACA will do them justice in the end. Nestor (a DACA Dreamer) speaking at a press briefing. EMS

“After a lot of sacrifice I started my own food export and import company,” said Nestor. “I have not only managed to generate wealth for this country but to give to my society. DACA has changed my life and allowed me to help other people.”

Without DACA, Nestor and his business could be affected, impacting thousands of jobs that he directly or indirectly creates with his company. And yet, he still believes in the future. “I am not afraid,” he said. “I trust our leaders. I am an entrepreneur, resident, father, husband and member of my community and of this American society and I want to continue being so”.

“DACA has transformed the life of my partner,” added Juan Carlos, his friend and fellow businessman. “Thanks to the status, he has been able to beat the odds in many ways.”

Rocío works as coordinator of a program for survivors of violence in Los Angeles. To a large extent, her work with the community has been inspired by life’s challenges as an undocumented immigrant.

“Since I was little, I was very aware of my family’s sacrifice in order for the kids to have a better life,” she said. “I have studied and worked diligently to be a high school valedictorian, go to college and dedicate my work to helping my community. Thanks to DACA I have been able to do all this and also travel to my country of origin to connect with relatives, after 18 years of separation.”

The Trump administration’s attempts to eliminate the program that has done so much for hundreds of thousands of young immigrants have helped this young immigrant from Puebla, Mexico, use her “ganas” and “anger” in favor of her community.

“More ganas and more anger, to fight for my community” he said. “That’s what I got from this Trump administration.”