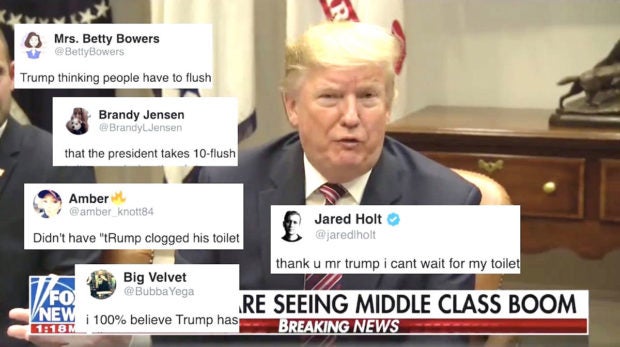 NEW YORK—I have always harbored the suspicion that the White House, with its orange-haired occupant, is in reality an Outhouse.

That suspicion was confirmed no less by the sitting president—siting in his office, that is—when he complained to the media about the state of toilets in this country and how one needed to flush 10 to 15 times, for mission (emission?) to be accomplished.

Could he have meant it metaphorically, alluding obliquely to the deep state when it comes to flushing down secrets that were they exposed would stink to the high heavens?

If he did, it was purely by accident. The man wouldn’t know a metaphor from Singapore. The only thing deep about his state is his complete inability to digest facts. Reliable sources have it that every time he has to deal with the realities of the world, such as the existential threat of climate change, or Russia’s interference in the 2016 elections and its continuing threat to do so next year, or the possibility of being kicked out of office via impeachment, he feels the urge to pay the rest room a visit.

In Manila we have a term more suitable for that place where he seeks solace, where he can say he is enthroned: the comfort room, or CR, our slangy equivalent of the loo, or the john.

To allay fears of his Secret Service detail that nothing untoward is happening to him in the CR, he presses the lever so that the sound of flushing reassures them. (Being a native of Queens, Trump surely knows about flushing.) Then again wouldn’t the Secret Service be worried by the third or fourth time that that sound is heard? Wouldn’t they be concerned that some serious s**t is going on, that perhaps an alligator has crawled out of the lower depths, or a North Korean hit man has somehow gotten in, via the White House plumbing system? I suppose somewhat like Pavlov’s dogs, they have become conditioned to expect no less than ten, no more than 15, flushing sounds. Once the 15th is sounded, and Orange Man fails to emerge, they can then barge in, guns at the ready.

What goes on in there when he is all alone?

Tweet in that hallowed chamber, indulging in his version of Game of Thrones?

Speak to Putin on an unsecured cellphone to tell him how much he misses him?

Remind the president of Ukraine about doing him a favor?

Nevertheless, when he lamented that one needed to flush the potty ten to 15 times I must confess that I did feel a twinge of pity for the man. Not for him Lady Macbeth’s casual remark, once the assassination of Duncan leaves her husband, Mac the Knife, free to claim the crown and her hands smeared with blood, that “A little water clears us of this deed.”

Was she ever wrong! Later on, she realizes, that “All the perfumes of Arabia will not sweeten this little hand.” No matter how hard she scrubs, she will forever be tainted by the foul deed.

Nor will jiggling the toilet lever ten to fifteen times sweeten Don the Con’s little hands, or purify the air of the noxious odors that act as his retinue wherever he goes.

More importantly, the question arises: what exactly is he dumping?

Some wit has suggested it is the Constitution, but that no matter how often he tries, it will not go quietly into that awful night.

Definitely the Paris Accord.

And the Iran Nuclear Agreement.

And what can one say of the Republican Potty, I mean, Party? In their devotion to Don the Con, their leaders seem to be equally obsessed with matters of personal hygiene, of expunging fecal matter.

That will surely take an inordinately long time, since they’re so full of it. Copyright L.H. Francia 2019