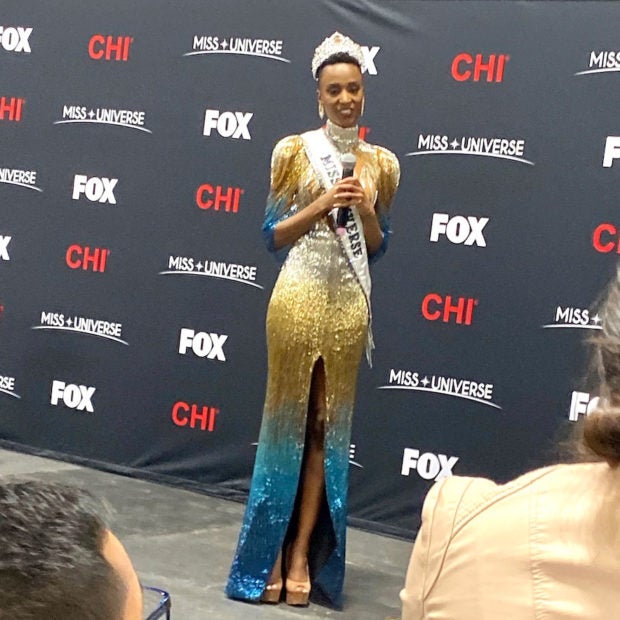 ATLANTA—This year’s Miss Universe pageant might just have proved more than ever that it will remain relevant, with the victory of South Africa’s Zozibini Tunzi, a black woman and an advocate of natural beauty.

“I grew up in a world where a woman who looks like me, with my kind of skin and my kind of hair, was never considered to be beautiful. I think that it is time that that stops today,” Tunzi said in her final message before she was announced as the new Miss Universe.

More than 90 women from around the world participated in the pageant last Sunday. Twenty-six year-old Tunzi was among the early favorites and most favored to win in the end.

“Miss South Africa is an epitome of beauty beyond skin-deep,” said New York concert promoter Reagan John Rada, who watched the pageant live at Tyler Perry Studios. “Change is inevitable in the Miss U pageant system. I think we will see more women coming forward and using the pageant as an opportunity to raise awareness on women’s rights and equality. This is very encouraging, very empowering.”

During her first press conference as Miss Universe 2019, Tunzi emphasized the importance of educating the future generations. She also challenged men to step up.

“I think educating the future generations is the best way to go,” she told INQUIRER.net, responding to a query about how she would use her reign to fight violence against women and children. 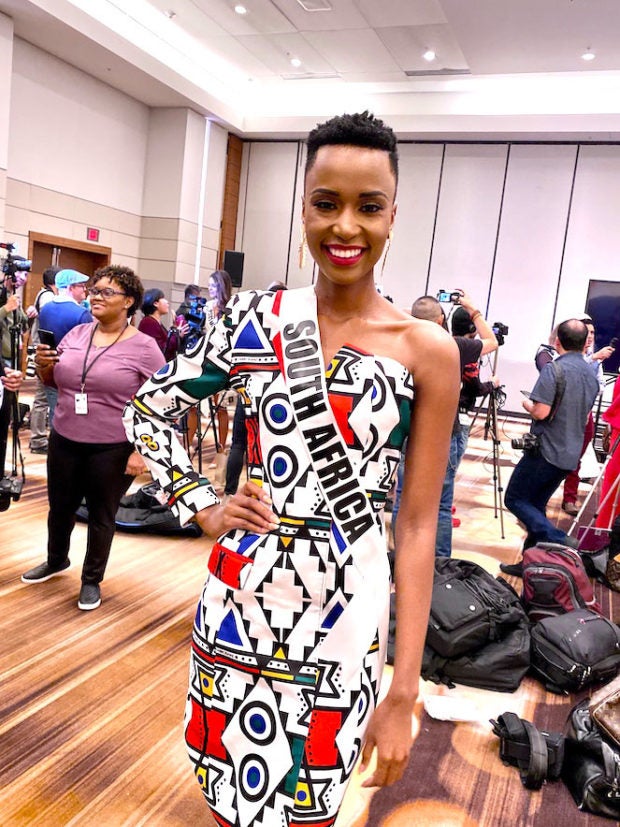 “My thing always is if we fail now as adults, maybe we can do something to change the lives of the future generation. So I want to challenge men to actually step up, to teach their sons how to look at little girls, young girls as their equal from a very young age so that they grow up to be the men that we need in society today. So that is something we cannot accomplish right now. Maybe in the next 10 years, we will have the start and maybe we will bridge that gap of 108 years and halve it maybe to 50, maybe to 30, maybe to 20.”

Tunzi hails from South Africa’s Xhosa tribe and her name has a special meaning. “It means both hands depict gratitude, being grateful and thankful,” she told INQUIRER.net.

The Philippines’ bet Gazini Ganados made the Top 20 cut. She told INQUIRER on Thursday that “my game plan for this Sunday is to remain who I am, to be more energetic and bubbly and then I know that I will shine to be myself.”

But things got out of hand as she seemingly got overwhelmed, and it cost her the crown.

“Gazini perhaps did her best but unfortunately it was not good enough to keep her in the running,” said pageant fan Rasmin Diaz. “Catriona set the bar so high that we can’t help but compare their performances.”

Perhaps Ganados dealt with more pressure. For the first time in pageant history, the candidates from Mexico and Puerto Rico, along with those from Thailand and Indonesia did not need interpreters. Their stronger ability to communicate in the universal language made this year’s competition one of the toughest. 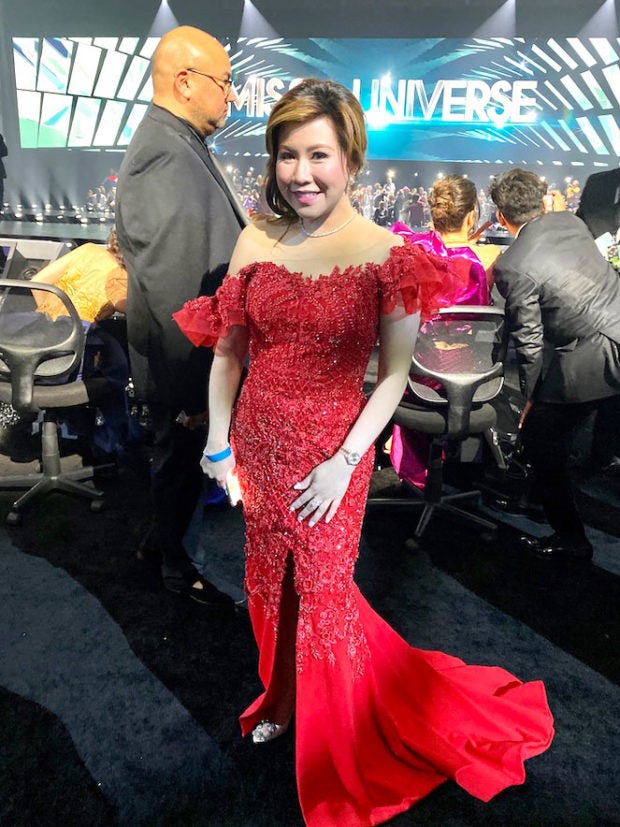 “She (Ganados) failed to exude confidence, be it in walking her gown and the national costume during the prelims or giving her platform speech in the finals,” Diaz noted.

“It was unfortunate to see Gazini get disoriented in full public view. She was seen making errors on stage blocking and mumbling her speech on cam while waiting for her turn,” she added.

In an earlier interview, Ganados told INQUIRER.net she would rely on affirmations to get through ever-present pressure. “You know, the pressure is always there and I know that pressure is there for me to lift up, for me to start giving myself affirmations that I am enough and that I can do this. And you know, when there’s pressure, there’s goal. And when you want to reach through that goal, you know you have something to reach for and then you have something to look forward for. And so the pressure is actually not that bad,” she said last Saturday.

Raymond Golez, a pageant coach and mentor from Brandon, Florida, noted that Ganados came well-prepared for the Miss Universe finals.

“Many people believe that Gazini’s major weak point is her communication skills, but all throughout her journey to the Miss Universe, she did improve a lot, thanks to the massive training that she underwent these past months. I’ve personally seen how she transformed into the well-versed kind of woman she is today, but it looks like it was still not enough to make a good and lasting impression,” he told INQUIRER.net

Experienced in judging pageants, Golez said judges would consider “off-the-beat moments” when scoring candidates, but conceded that Ganados “was caught off-guard on this aspect and affected her overall scores from the judges.”

He added that the Miss Universe Organization (MUO) employed a different scoring system this year. “We cannot deny the fact that Gazini was one of the top contenders for the crown, and she has a good sash factor (Philippines), that’s why all eyes were on her even during the onset of the competition. But it looks like the panel of judges had a different perspective on this matter, also to coincide with the new judging system of MUO, wherein, intelligence comprises the majority of the percentage of the total score. We may not know what truly transpired during the ‘closed-door interview’ but many believe that Gazini did well, we just can’t determine the level of impact that it brought to the judges. Were they impressed? Were they satisfied?” Golez said.

One indication is that Ganados was belatedly announced as the winner of the National Costume competition instead of Miss Malaysia, who went onstage beside Steve Harvey to claim the award. This detail became controversial because people felt MUO did not explain how the glitch happened in the first place.

“From what I saw in the run up to the finals, Gazini was in a very strong batch of candidates that it could’ve been anyone of them deserving to wear the new Mouawad crown in the end. All preparations for the different stages of the competition are important and she had a very strong brand and presence in social media. I believe that in her heart her advocacy is sincere but she needed to come across with a stronger conviction in it or she could’ve worked to have a more inclusive platform,” she told INQUIRER.net.

Having gone through a pageant herself, Deforest said she could imagine how stressful it might have been for Ganados to have missed the Asia-Pacific regional semi-finals and instead be called for the wildcard group. While praising Miss Philippines’ “beautiful on-stage presence,” Deforest said Ganados could have been more eloquent in answering Harvey’s casual interview question “because she didn’t fully elaborate on it and closed with Steve knowing the Christmas/birthday gift that she wanted like it was a private joke.”

Deforest also congratulated Cary Santiago for his winning Philippine Eagle-inspired national costume. “The evening gown he designed was stunning and despite being similar in silhouette to his Binibining Pilipinas design, it showed his artistry in construction and fabric manipulation,” she said.

Behind the scenes, Filipinos made history this year for having landed two coveted co-branding opportunities. The swimwear of the contestants was co-designed by Carmela Sira of G. SONSIE while O Skin Care was named as the pageant’s official skincare. 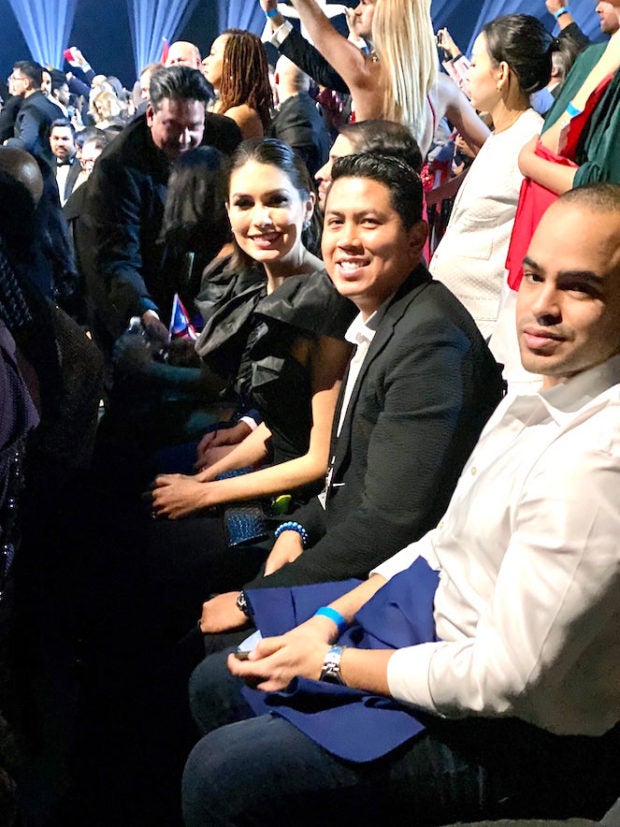 “Last December 4, the 91 delegates, I was able to teach all of them on how to have a dewy, glowy skin,” Olivia Quido-Co, the Los Angeles-based Filipina CEO of O Skin Med Spa, told INQUIRER.net.

“The following day, they saw results. So they started posting on their social media. Tapos I got a lot of inquiries from their followers, because for example, Miss Brazil applied it on her skin, so she said, ‘I’m so in love with this product.’ So all her followers, they were asking where can we buy the products in Brazil. Same thing with Thailand, Puerto Rico and Sweden, so it’s so overwhelming, yung Instagram messages namin, like unbelievable,” Quido-Co said. 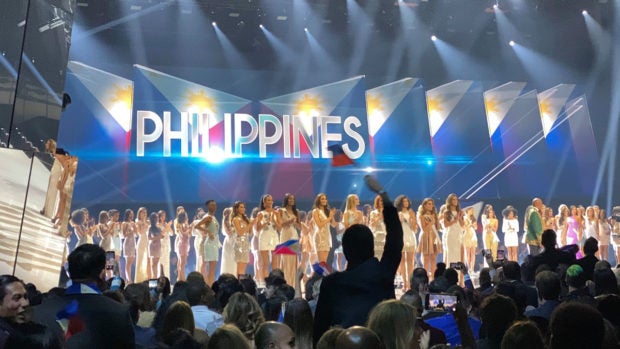 O Skin has a Catriona Gray Collection. Miss Universe 2018 posted how-to videos on the beauty products during her reign, not only because MUO has an ongoing contract with O Skin Med Spa but also because she liked them.

On the red carpet, Gray delivered a parting message to her millions of fans and supporters.

“Thank you so much for an amazing year,” she told INQUIRER.net. “This whole journey was made what it was because of each and every one of you sharing your voice with mine. And it gave me so much meaning and fulfillment and I hope that you continue to support me in my next journey. I will keep on going, I will keep on doing the work that I love the most, and I hope that you will join me.”