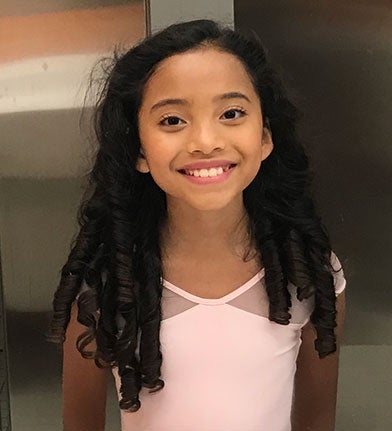 Charlotte Nebres, 11, the first-ever black lead in NYC Ballet’s “The Nutcracker” studies at the School of American Ballet. SAB PHOTO

Charlotte Nebres, age 11, of Madison, New Jersey is breaking barriers as the first black Marie, the young heroine of “George Balanchine’s The Nutcracker,” at New York City Ballet. It’s a milestone for the production, which dates to 1954.

Nebres studies ballet at the prestigious School of American Ballet in New York City where auditions for “Nutcracker” were recently held. She was selected at the audition of over 180 children to play the coveted role of Marie, the little girl who becomes enchanted by a wooden Nutcracker. Her father is Filipino and her mother is Trinidadian.

She was recently featured in The New York Times along with other “Nutcracker” leading cast members: “When Charlotte was 6, Misty Copeland became the first female African-American principal at American Ballet Theater. That, she remembers.”

“I saw her perform and she was just so inspiring and so beautiful,” Nebres told The Times. “When I saw someone who looked like me onstage, I thought, that’s amazing. She was representing me and all the people like me.”

To see Charlotte in her starring role at Lincoln Center purchase tickets atnycballet.com.