Were you thankful for Trump or the Constitution? 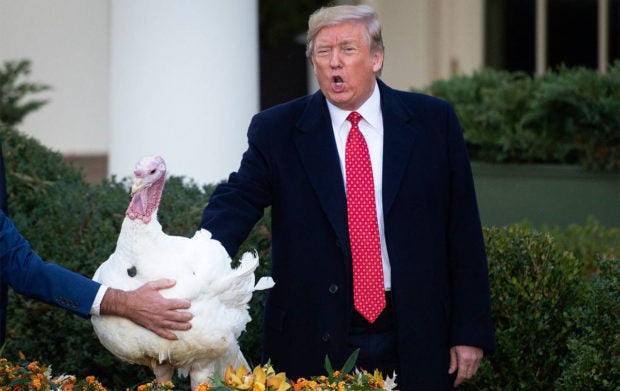 So, who won over the long weekend? I don’t mean your favorite football or basketball team. I mean your impeachment team.

You’re at the dinner table, eating turkey and someone had to mention the real turkey of the hour who tweets relentlessly on the subject of the day.

Ideally, you’d be fighting over the wishbone, ripping off the legs and wings and brawling over whose mouth you’d rather ram a turkey tail — Rep. Devin Nunes? Or Rep. Adam Schiff?

But you’re Filipino. With your family. And no one dares says anything to rock the boat. We make nice. Eat more rice.

On the harsh side, the conversation moves to the dryness of the turkey without Mang Tomas, or the new Filipino vegan food truck auntie saw at the mall, or whether all the cousins will get together on one of the post-meal shopping days and who will be passively omitted (oh, that’s the harshest!).

Or maybe suddenly someone started talking about Duterte like he matters to those of us in the U.S. – and he does — to show how by comparison how far the U.S. has sunk.

But impeachment? No one will dare say anything about impeachment. Did that describe your Filipino Thanksgiving dinner?

Well, it seems par for the course.

When you watch the impeachment inquiry hearings from Hawaii like I did recently, you know you are an unabashed news nerd, and a pro-Constitution Filipino. Guilty, as charged.

It was ideal, really. The early bird show in Paradise started at 5 a.m. You watch till noon, then you hit the beach.

And no, being in paradise didn’t blunt any of the damning testimony. If anything, there was a sense that if this is was the way the Trump White House works, what else aren’t we being told about that would be jaw-dropping.

Thank god for the whistleblower. The GOP wanta him outed. But for what reason? He’s just the kindling. The big logs are in flames now.

Still, most people I talked to in Paradise just skipped the 5a.m. hearings and went to the beach Hearings? Impeachment? You want Mai-Tai, brah?

I was a little disappointed. Not one person said to me, “You know that immigrant man in uniform, Lt. Col. Vindman, is a patriotic hunk.”

Or: “Boy, that Fiona Hill made it sound like ‘Masterpiece Impeachment!’ She could read Russian dossiers to me all night!”

And definitely nobody said, “I love that frat-boy potty-mouth, Gordon Sondland. I want him on my team!”

No one cares?
Hawaii is the most Asian American state in the union. You can’t get any further from Washington and still be in America.

But from what I can tell, Hawaii confirms what the latest polls show about most of the country. People don’t like to show where they are on impeachment. At best, they are on the fence: 50 percent Humpty. 50 percent Dumpty.

I’m just waiting for something to fall.

Democrats are far more for impeachment than Republicans, naturally. But everyone’s still not quite engaged in the transcripts and hearings. It’s like they’ll catch whatever’s important on the highlights, if some irrefutable thing emerges.

A smoking gun? Or a buried smoking pig? Don’t expect it.

Trump and his loyalists don’t concede a point on anything. Not even the truth. They negate and obfuscate at every turn. It’s the perfect defense when the jury is a jaundiced public.

But then the Democrats haven’t been able to sell the truth or expose the Republican defense, which is tantamount to a third-grader’s tantrum, i.e., “Nah-uh!”

That’s the best the GOP has done. That, plus debunked conspiracy theories and remarks like “the money was paid to Ukraine anyway!”

None of it exonerates Trump. It only obscures and confuses the issue.

That issue, of course, is whether the president withheld money allocated by Congress to Ukraine for military aid in exchange for political dirt on the Bidens.

Is making the people’s business personal an abuse of power? Breach of national security? The testimony has been damning.

But have Trump and the GOP convinced the public that the whole thing is a witch hunt or just not worth paying attention to?

Thanksgiving is just a day in between hearings for Trump.

The Intelligence Committee hearings were overwhelmingly damning. Gordon Sondland was pretty convincing that the orders came from the top and that there was a quid pro quo, though he left a tiny loophole. He said he never heard Trump give him the directive. It was Sondland’s assumption that Trump wanted the aid to Ukraine held up in exchange for dirt on his political opponent.

So, Sondland’s testimony was less courageous and patriotic, and more of a “c.y.a.” move to cover his sycophantic naivete while playing rookie diplomat.

More courageous and patriotic were the testimonies of Lt. Col. Vindman, the immigrant in uniform, who heard that infamous Trump-Zelensky phone call on July 25 and knew something was rotten. His best quote was to deny he was a Never Trumper, but more of a “Never Partisan.”

It’s the answer all Americans should have on the question of impeachment. Never partisan. Pro-Constitution. Pro-Democracy.

And Fiona Hill’s testimony that the serious policy was being pushed aside so that Sondland could conduct his errand for Trump is especially damning.

And all of it admissible in a court of law, which is strange that Republicans keep saying it’s all “hearsay.”

I can’t see a let-up when the Judiciary Committee hearings start next week.

Congressman Ted Lieu will get his facetime, and if you follow Lieu on Twitter, you know the former Air Force veteran and Asian American firebrand will come out swinging.

Trump could come in and testify, if he chooses. But now the White House is saying they will not participate, continuing to act like criminal defense lawyers fighting every procedural point without addressing the facts that are pretty damning.

Incidentally, Congressional hearings are different from criminal court. But Trump likes to confuse everyone by talking about no due process, no lawyers, no witnesses. Not only has he had his chance to participate, Trump’s also essentially obstructed Congress by preventing White House officials from testifying.

What’s the president scared of?

When President Trump did the annual turkey pardon last week, he tried to joke around and make it a light moment.

Naturally, as a vegan, I was thinking about the 46 million turkeys set to be consumed at the Thanksgiving dinner table. Nothing funny about celebrating gratitude with animal death.

But I did see the humor in watching Trump pardon the two white Carolina turkeys, named Bread and Butter, and wondered if he wasn’t thinking of his own cast of characters, starting with the convicted Michael Cohen, Roger Stone, Michael Flynn, Paul Manafort, Rick Gates, George Papadopoulos not to mention those other Trump loyalists awaiting their ultimate fates. Rudy Giuliani? The Ukrainians Lev Parnas and Igor Fruman?

Every last one of them may want the turkey treatment someday. Maybe even the president himself.

Hang on to the standards we still have. It’s lasted since the Founders.  That’s something to be thankful for. Just don’t get sucked in by the ti-animpeachment rhetoric, or you might as well say “Aloha, Constitution.”

Emil Guillermo is a journalist and commentator. He writes a column for the Inquirer.net’s North American Bureau. Twitter @emilamok  Listen to him on Apple Podcasts.