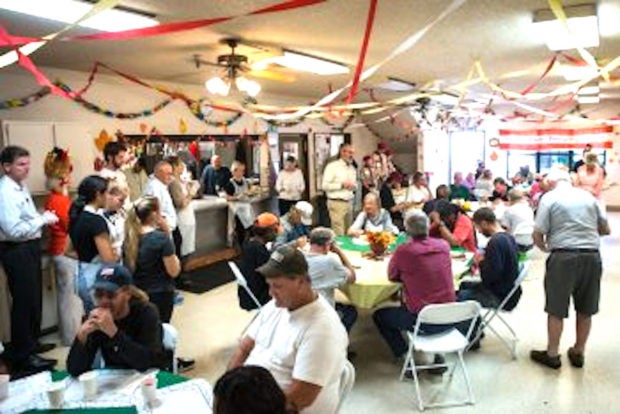 Cristina and Federico Lim (not in photo) found shelter at the Santa Barbara Rescue Mission, where with the support of new friends she was able to study and pass the nurse licensure exam and will be able to look for a job. SBRM PHOTO

SANTA BARBARA, California – A Thanksgiving story in a local newspaper featured a homeless Filipino couple whose life seems headed for the better, thanks to the city’s Santa Barbara Rescue Mission.

Cristina and Federico Lim, married for 40 years, had a Thanksgiving meal Wednesday, with turkey, stuffing and mashed potatoes at the Rescue Mission where they had been residing for the past eight months. They had lost their home a year ago.

The Lims moved to Santa Barbara from Long Beach 26 years ago. Cristina Lim had found a job as a caregiver in the region, and the couple lived with Mrs. Lim’s aunt, Josefa, who passed away from polycystic kidney disease a year ago, according to the Santa Barbara News-Press feature story.

Josefa’s stepchildren decided to sell the house the Lims lived in for 25 years and gave the couple 60 days to look for another residence. But the Lims could not find a place they could afford. They became homeless for the first time in their life and began sleeping on the streets.

After four months of homelessness, they found out about Rescue Mission from a friend’s son who is homeless. When the Lims were still living with their aunt they used to give food to this friend’s son. He led them to Rescue Mission where they have been living for the past eight months.

there was definitely a community that comes together at Rescue Mission.

“I was here when I passed my RN test,” Cristina told the News Press. She added that she would soon begin searching for employment opportunities with one of the Cottage hospitals.  She had been studying to become a nurse at Santa Barbara City College.

She told the News-Press about the support she received from Rescue Mission volunteers and residents that helped her to study hard and not to give up.

“That’s why I passed,” Mrs. Lim told the News-Press. “It’s a good thing we have Rescue Mission or else we would have nowhere to stay.”