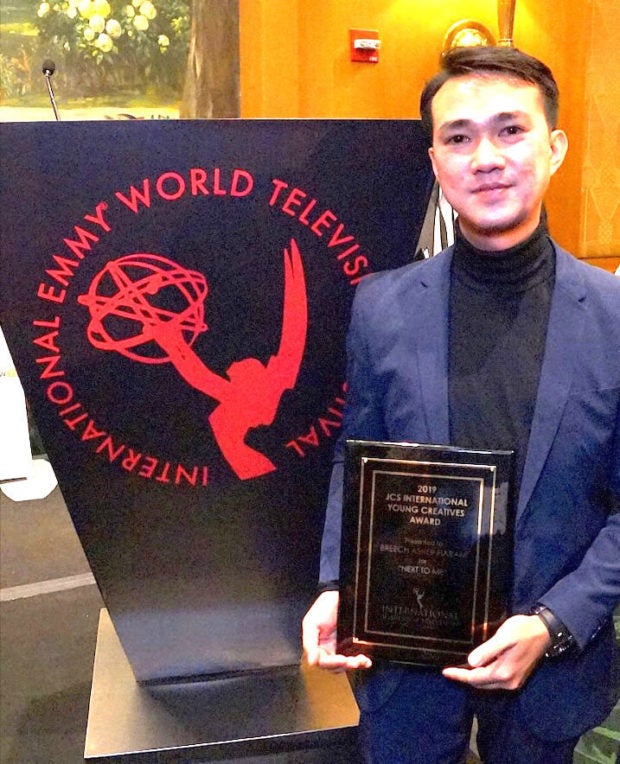 NEW YORK – In a first for the Philippines, a young Filipino filmmaker from the Davao Region of Mindanao added another feat to his long list of achievements with his short film winning entry to The International Emmy World Television Festival held in New York City, November 23-25.

Breech Asher Harani, 27, was judged one of the three winners in the JCS International Young Creatives Award 1 Minute Video Competition for Peace. His entry “Next to Me,” together with “P.E.A.C.E. – A Spoken Word,” by Funke Alafiatayo (United Kingdom) and “It Starts Within” by Artes Ferruni (Albania) bested over 26 finalists for this year’s theme “Stand Up for Peace.”

The winners, who were flown to New York to receive their award on Saturday, November 23, were selected by a blue-ribbon panel of international jurors led by chairman Michal Grayevsky, president of JCS International and founder of Young Creative Awards.

Harani could not believe he won when he received the announcement in October, he told the Philippine Daily Mirror. “I screamed a little. There were more than a hundred hopefuls around the world this year, but somehow I made it to the finals and among the three excellent entries. It’s really surreal.”

At the preliminary stage of the competition, he said that there were a few Filipinos who also submitted their entries.

The JCS International Young Creatives Award, founded by business and philanthropic leader Ronald S. Lauder, was established “to foster young talent across the globe while sparking a conversation around peace.”  Lauder, who himself was a recipient of the Directorate Award at the 34th International Emmys in 2006, said the Award is “a powerful way to promote peace through art.”

It is a partnership arrangement between JCSI and the International Academy of Television Arts & Sciences which was launched in 2017.

The annual competition is free and open to non-American citizens aged 18 to 29 years old. An online public voting is conducted, and a final round of judging takes place.

“Next To Me” is about the Battle of Marawi in the Philippines in 2017, where many Muslims migrated from Marawi to Mindanao. Uprooted children were forced to transfer schools, where they were bullied and discriminated against, especially in non-Muslim communities. Harani did not find it difficult to prepare the film since he is used to quick shoots.

He did a film/video workshop to the Media Arts students of Compostela National High School at that time and decided to shoot and teach at the same time. “Editing took me a day because a 1-minute span is tricky, so I have to make sure all the right scenes are there,” said Harani

He joined the competition because he loves to be a part of a platform that uses audio-visual arts as a way of raising awareness on social issues.  “When I saw this opportunity that they are looking for films about ‘Stand Up for Peace,” I immediately thought of all those experiences I had and used my knowledge about social inclusion as the core of the narrative,” he said.

Although there is no monetary prize for the award, Harani believes that having the name “I-Emmy” in his portfolio is already “10x better than cash.” “We are talking and networking with the best people on television around the world, and that is the best prize ever,” he said.

Harani has been to many international events and won awards over the years. His works on short films and photography have received acclaim in the USA, Hong Kong, Serbia, France, Belgium, Ireland, UK, India, Sri Lanka, Thailand including in his home country.

He considers The Plural+ International Jury Award in 2015 at the Paley Center for Media in New York City for his short paper tableau film “BLUE” as his most notable achievement among others.  In 2017, he also won the International Citizen Media Award in Munster, Germany, for his short 2D animated film “My Story”, which was a collaboration with a Pakistani filmmaker.

He has been invited also to several international organizations’ forum as a resource speaker. He recently finished an Arts Residency Program at the Changsha Media Arts n Changsha, China which ran from April 6 to May 4, 2019.

Harani has been creating short films and video art since 2012 but he has not tried a full feature yet. However, he said he is crafting a good story and he is hopeful that he can produce one. He is currently working on a short film, about 20-30 seconds long, called “The Water of Forgetting.”

The film is about the vanishing stories of the Bagobo Indigenous beliefs on life and death. He said that he is in the script development stage and perhaps if he gets the right funding he can start shooting by next year.

Shooting for the best

Harani has been an advocacy filmmaker for 7 years.  He has been always a movie fan since childhood. While there are no film schools in Davao, he decided to go to the closest route, which is Mass Communication.  He studied Bachelor of Arts and majored in Mass Communication at the Holy Cross of Davao College. “It’s not really a film course but I learned a lot from there the basics of television and film production,’ he said. 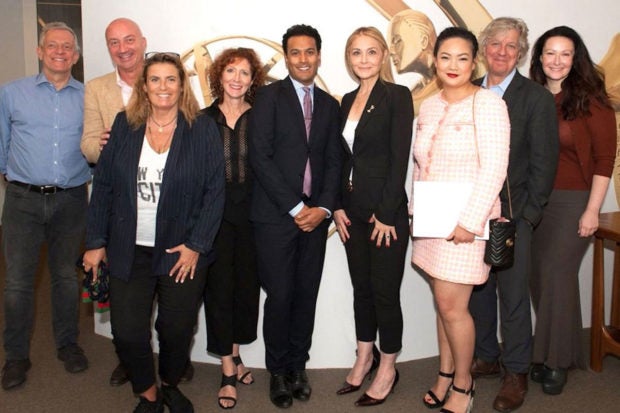 With his experience in short films, he plans to launch an online series in the future. For now, because of invitations to arts residency programs in Europe, he said: “We’ll see how it will play out. I don’t really think about it too much, I just go with the flow,” Harani said.

After the International Emmy Awards Gala on Monday, Nov. 25, he flew back home to the Philippines the following day. This being his third trip to the US – all of them to New York City — he hopes to explore other states someday. Meanwhile, at his young age, he will keep on working to accomplish more – shooting films for the best.

Filipino Jose Mari Abacan, first vice president for Program Management in GMA, sat as one of the international jurors in the Comedy category this year. “As always, judging for the International Emmys is an enriching experience,” he said. “In my almost 30 years in the industry, there is always room for learning something new – I get this every time I judge for the different categories,” he told this reporter.

Abacan has been judging entries for more than 10 years. He has judged for the other categories in the past like Short Form Series, TV movies and Performance categories. “This is not the first time in the Emmy’s that a Filipino judge was tapped in one of the categories,” he said.

GMA has been asked to submit entries each year. “We’ve been regularly submitting when we see something that is worth competing for the Emmys,” Abacan said. “GMA encourages our producers, writers and directors to strive for excellence in creating content not only for the Philippines but also for the global market.”

As first vice-president, Abacan acquires programs locally and internationally. He was responsible to introduce programs to the Philippines that came Korea, Thailand, India, and Turkey. His responsibilities include supervising locally produced programs by partners and movies as an addition to Programming and Acquisition functions.