The rally in Sunrise, located just north of Miami, saw Trump unleash harsh invective against his political foes, calling out Democrats’ “depravity” and claiming that “the failed Washington establishment” is targeting him because he is “exposing a rigged system.”

As always, Trump reserved special venom for American journalists, whom he called “some of the most corrupt people in the world.”

The attack prompted thousands in the crowd to turn and boo and shout insults at media outlets covering the event.

With Democrats scheduling the next phase of impeachment in the House of Representatives for next week, the Sunrise event allowed Trump to show off the right-wing base he’s counting on to keep him in power through the crisis — and again in the 2020 election.

Democrats in the House seem likely now to impeach Trump on charges that he abused his office by attempting to pressure Ukraine to open a deliberately embarrassing corruption probe of one of his main 2020 Democratic rivals, Joe Biden.

Even if the Republican-dominated Senate acquits him, as expected, that would still make him only the third president ever impeached.

But Trump hopes to take revenge by winning reelection, and Florida will be a key piece to the electoral puzzle.

Trump recently made the state his legal home, after he announced a switch of residence from his native New York, and he’ll hope to repeat his surprise win there against the far more heavily favored Democratic candidate Hillary Clinton in 2016.

Even the choice of rally location, inside pro-Democratic Broward County, demonstrated his intent to challenge for the state’s crucial electoral college votes.

“That landslide is going to start right here in the great state of Florida,” he said.

After the rally, Trump was to retreat to his Mar-a-Lago golf resort for the rest of the week, including Thursday’s national Thanksgiving Day holiday.

But there was to be no respite from the impeachment probe, which Democrats say has already proved Trump ran a corrupt parallel foreign policy intended to benefit his political fortunes at home.

The Democratic chairman of the Judiciary Committee in the House of Representatives, Jerry Nadler, announced that new public hearings, which could lead to articles of impeachment, will start December 4.

Nadler even issued an invitation for Trump to attend.

“The committee looks forward to your participation,” Nadler said.

At the rally, Trump called impeachment a “witch hunt.”
He then drew some of the loudest applause of the night by saying that Americans knew the case against him was “bullshit.”

Trump is increasingly frustrated and angered by impeachment, which has left the country almost evenly divided, fueling predictions for the most ill-tempered and volatile election season in decades.

Impeachment even made its way into the friendly annual ritual of a presidential pardon for two enormous turkeys at the White House on Tuesday.

The birds “already received subpoenas to appear in Adam Schiff’s basement on Thursday,” Trump joked to guests in the Rose Garden, referring to the head of the intelligence committee leading the impeachment probe in the House of Representatives.

Trump also managed to get in a dig at the media, which he almost daily berates as fake, saying journalists would like the story because “turkeys are closely related to vultures.”

Democrats plan to keep working through the Thanksgiving break on what looks like a fast track to impeaching Trump. 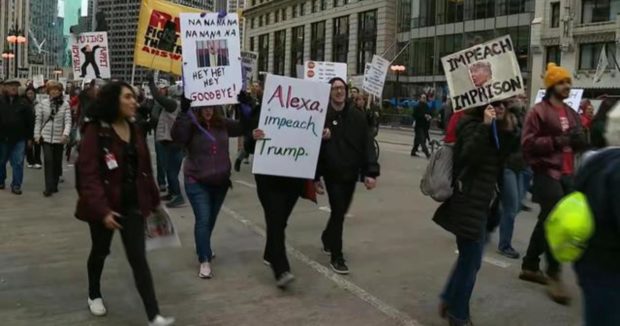 Once the Judiciary Committee produces articles of impeachment, the full House, controlled by Democrats, can take its historic vote.

Although the Senate will then almost certainly throw out the charges, this is not the way that Trump, who often boasts of being among the most successful US presidents, wants to be remembered.

There was more pressure on the administration late Monday when a Washington appeals court ruled that White House aides cannot continue to dodge subpoenas for testifying before the Democratic-led impeachment panel.

The administration will launch a further appeal, tying up the case, but the ruling, which applies specifically to Trump’s former White House lawyer Don McGahn, raises the temperature.

Trump sought to downplay the development, insisting on Twitter that he doesn’t care if his top current and former associates, including his fired national security advisor John Bolton, testify.

“I would actually like people to testify,” he said Tuesday, although his administration has issued a gag order banning aides from participating with the inquiry.