President Donald Trump on Thursday accused Iran of blocking the internet to cover up “death and tragedy” while the powerful Revolutionary Guards suggested that a wave of street protests is now over.

Trump’s intervention on Twitter further raised the temperature over the turmoil in Iran, which is already reeling from US-led economic and diplomatic pressure.

“Iran has become so unstable that the regime has shut down its entire Internet System so that the Great Iranian people cannot talk about the tremendous violence taking place within the country,” Trump tweeted.

Iran has become so unstable that the regime has shut down their entire Internet System so that the Great Iranian people cannot talk about the tremendous violence taking place within the country….

“They want ZERO transparency, thinking the world will not find out the death and tragedy that the Iranian Regime is causing!” he wrote.

US Secretary of State Mike Pompeo meanwhile vowed to “expose and sanction the abuses” against the protesters, urging Iranians to send “videos, photos, and information documenting the regime’s crackdown” in a post on Twitter.

Demonstrations erupted in sanctions-hit Iran last Friday, hours after the price of gasoline was raised by as much as 200 percent.

Unrest spread to scores of urban centers, during which police stations were attacked, petrol pumps torched and shops looted.

A near-total internet shutdown has made obtaining information on bloodshed difficult.
Officials have confirmed five deaths, but Amnesty International has said the real death toll could be well over 100.

The UN’s human rights office has said it was alarmed by reports that live ammunition had caused a “significant number of deaths.”

Iran’s mission to the UN called the Amnesty toll “speculative” and said Iran was subject to a “disinformation campaign.”

On Thursday, the Revolutionary Guards’ official website praised the armed forces for taking “timely action” against “rioters” and suggested that calm had been restored.

While the internet remained mostly blocked for the fifth day, state TV showed footage of what it said were pro-government rallies to celebrate the defeat of the “conspiracy.”

Crowds in cities including Qom and Isfahan chanted “death to seditionists, death to America” and “the blood in our veins is a gift to our leader.”

According to a statement on the Guards’ website, the “incidents were ended in less than 24 hours and in some cities in 72 hours.”

Update: 65 hours after #Iran implemented a near-total internet shutdown, some of the last remaining networks are now being cut and connectivity to the outside world has fallen further to 4% of normal levels 📉 #Internet4Iran #IranProtests

Protest leaders were arrested in the province of Tehran and Alborz as well as in the southern city of Shiraz, it added.

The “arrest of the rioters’ leaders has contributed significantly to calming the situation,” it said.

Top Iranian security official Ali Shamkhani vowed that all those identified as rioters would be “punished.”

Update: 136 hours after #Iran implemented a near-total internet shutdown, connectivity to the world remains low at 15% of normal levels📉

“Enemies wanted to exploit the Iranian nation’s protest regarding livelihood issues but failed due to the people’s vigilance,” Mehr news agency quoted him as saying.

State television aired confessions of a woman named Fatemeh Davand who said she was “one of the leaders of riots” in northwestern Iran and had links to “anti-revolutionary groups in a neighboring country.”

Iran’s neighbor Iraq has been hit by weeks of its own anti-government protests, with demonstrators voicing resentment over what they describe as Tehran’s meddling in their country.

Tehran replied by accusing the EU of interference and asking it “to explain why it doesn’t keep its promises” to help the Islamic republic bypass US sanctions that have plunged Iran’s economy into recession. 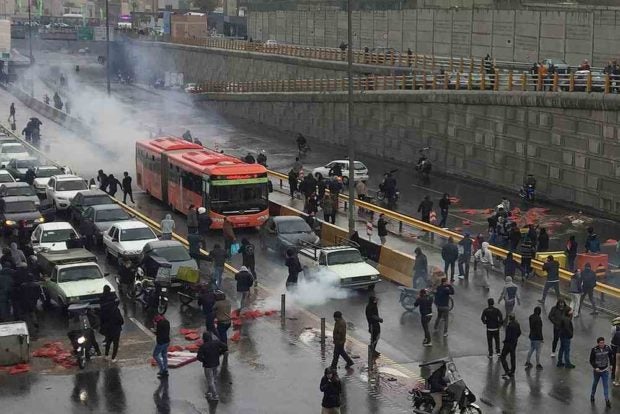 In an effort to mitigate the higher fuel costs, Iran as of Monday started paying out cash handouts to 40 million people, with 20 million more sets to be paid on Saturday, local media said.

Monthly handouts — ranging from 550,000 rials ($4.64) for individuals to slightly more than 2 million rials ($17) for families of five and more — are to be financed via revenue generated from a reduction in petrol subsidies.

But on Tehran streets, people complained of economic hardship.

“Our income has not increased at all but costs have tripled or quadrupled,” Ehsan, a lawyer, told AFP.
“If it continues as is it will be really hard to manage livings costs.”

The internet blackout remained largely in effect on Thursday, with Iranians abroad tweeting hashtags like #Internet4Iran and calling for an end to the outage.

The national security council made the decision to pull the plug on internet access, said semi-official news agency ISNA.