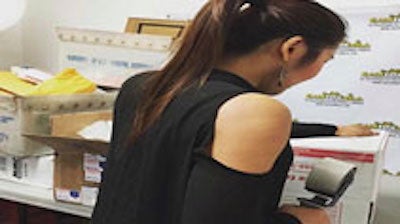 Aurora Isabel is a Filipina who worked for the Pasadena Water and Power. Isabel complained that her manager discriminated against her for her accent. She was demoted to a field position and was told to stop complaining or she would be demoted again. Her manager told her that she had to learn to speak without an accent “like a white person” and “work on her diction.”

At some point, Richard Thompson became Isabel’s supervisor. Thompson was approached by management and told that Isabel was a “problem child” and that she was being placed under his supervision. Thompson, however, later wrote a performance evaluation for Isabel in which he recommended a promotion for her.

Isabel and another Filipina coworker later sued the City for gender and racial discrimination. Thompson was asked by Isabel’s attorneys to testify on her behalf. At this point, Thompson said that lawyers and representatives for the city met with him and instructed him to testify that Isabel wrote her own evaluation, not him, and that he did not recommend that she be promoted. Thompson claimed that this was an “obvious direction to commit perjury because it was not the truth.” He refused to follow this instruction.  Isabel’s lawsuit eventually settled before trial.

However, Thompson claimed that because he spoke out in support of Isabel, he was subjected to a backlash that included an unwarranted investigation over his signing of a work order as well as other “harassing and retaliatory conduct.” The harassment and retaliation caused him so much stress that he was forced to retire from service. He sued the city for retaliation.

An employee who asserts his or her rights under the law, or who challenges an employer’s illegal conduct, may experience demotion or termination. This is unlawful retaliation.

In a retaliation claim, an employee must prove that she/he engaged in protected activity. Engaging in “protected activity” means that the employee must complain or oppose a practice which is forbidden by law (e.g. sex, race, or age discrimination). The complaint may be internal (e.g., made to managers or officers within the company) or external (e.g., made to government agencies).

Additionally, courts have held that “protected activity” includes complaints or opposition to conduct the employee “reasonably” and in “good faith” believes to be unlawful, even if the conduct is not actually prohibited under the law.

In a retaliation scenario, the employer will almost always present a different story. The employer may even create a pretext or fabricate a reason for the termination. To protect themselves, employees must gather their own evidence to establish that they are telling the truth.

Employees can document the facts in a letter or email to their bosses or to HR or to colleagues they can trust. They can also write notes or memos that may help refresh their recollection later. The documentation must be done at or around the time that the important facts occurred and must contain the employee’s complaint and the employer’s response. Documenting the back and forth between employer and employee creates a record of communications that can later be reviewed to determine the true reasons why any action was taken against the employee. It is also good for employees to pay attention to anyone who may have witnessed the employer’s conduct.

Thompson’s case went to trial. A jury eventually awarded him about $825,000 upon a finding that he was indeed subjected to retaliation for speaking out in favor of Isabel.