California ex-convicts get ‘second chances,’ thanks to Prop. 47 passage

California ex-convicts get ‘second chances,’ thanks to Prop. 47 passage 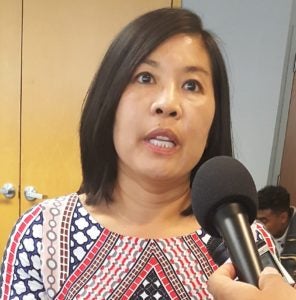 Filipina director of communication for Californians for Safety and Justice (CSJ) Stephanie Ong hails Prop. 47 as historic and very important to the Filipino community, “a community of second chances.” INQUIRER/Jun Nucum

ALAMEDA, California – This city declared June as “Second Chances   Month,” the first in the country to do so, in order to underscore the efforts to help former convicts to regain access to employment, housing, education and other necessities that would enable them to reintegrate into society.

Hundreds of people received pro bono legal assistance in reducing or expunging old criminal convictions under Proposition 47, aside from other second chance opportunities.

The proclamation of the Second Chances Month was made at an earlier ethnic media briefing “Prop. 47–Alameda County Officials Back Safer Solutions,” presented by New America Media (NAM) and Californians for Safety and Justice (CSJ) at the County Administration Building in Oakland. Various county and city officials and community advocates attended.

Aid to reentry into society

Alameda County Supervisor Nate Miley (District 4) explained that Supervisors Keith Carson (District 5) and Richard Valle (District 2) initially launched 1,400 jobs as part of the county’s campaign to ensure that former inmates have responsibilities and opportunities as soon as they reenter society. “We also want continue to develop the capacity fund that we have available for community-based organizations to work with formerly incarcerated,” Miley explained.

Proposition 47 was the measure approved by Californians three years ago to change six nonviolent drug and petty theft crimes from felonies to misdemeanors. It annually reallocates the prison savings to crime prevention, drug and mental health treatment, and trauma recovery services for crime victims.

The law also provides Californians with a historic “second chance” opportunity – to reduce the barriers to stability that people with felony convictions face. Proposition 47 permits anyone in the state with a record for one of the six crimes that the measure changed to a misdemeanor to remove that nonviolent felony from their record, no matter how old the conviction was.

This retroactive measure reclassified six crimes — simple drug possession when possessed for personal use, petty theft, shoplifting, receipt of stolen property, forging a check and writing a bad check–if all the mentioned offenses are under $950.

For 2017, the total Prop. 47 recommended funding by the Executive Steering Committee (ESC) from the measure’s savings fund is $103,651,000 (a marked improvement from the $68 million savings in the first year) of which $6 million is recommended for Alameda County, with at least ten other counties and health/human services agencies receiving differing amounts.

Speaking at length on the latest developments on Prop. 47, former San Francisco assistant district attorney and presently a staff attorney of CSJ Hillary Blout cited some of the gains and impacts of Prop. 47 as the measure enters its third year. Former San Francisco assistant district attorney and a current staff attorney at CSJ Hillary Blout talks at length of the gains and impacts of Prop. 47 which is now on its third year. INQUIRER/Jun Nucum

“There are 3,300 fewer people going to prison and we’ve seen tremendous savings of around $103 million. Counties will be getting grants to support community-based crime prevention programs and treatment so people don’t end up incarcerated,” Blout reported.

Other impacts of Prop. 47 so far include 280,001 petitions for resentencing or record change filed so far; 15,000 fewer incarcerated in California prisons and jails; daily jail population reduced by about 10,000 people in the first two months that resulted in better jail management by avoiding overcrowding; and more than 40,000 fewer felony convictions throughout the state, among others.

According to the California Department of Justice, felony arrests decreased by 118,940, more than 90,000 of which accounted for decreased felony arrests for drug possession in just one year after Prop. 47 passed.

Additionally, felony convictions fell by 55,406 in the first year. Many of those arrests and convictions are now handled as misdemeanors, which increased by 79,807 during the same period.

Blout also enumerated conditions of the jail system that prompted the introduction of Prop. 47 and these include the following:

Research has shown that increased incarceration does not lead to greater public safety. States that have reduced imprisonment the most, including California, enjoy greater crime declines than the states that continue to increase their prison populations.

Despite reducing its prison population by more than 30,000 inmates over the past half- decade, California’s violent and property crime rates are lower today than in 2010, before Prop. 47.

Prop. 47 opponents argue that incidents of crimes have increased with the measure’s implementation. Woods, however, cited a study of the Public Policy Institute of California showing no increase in crime in relation to Prop 47.

“There was hysteria that getting all these gang people out of jail increased crimes. That is not the case, and I can say not even close. Everyone released because of Prop. 47 were not committing these crimes,” Woods contends.

Stephanie Ong, a Filipina director of communication for Californians for Safety and Justice (CSJ) hailed Prop. 47 as historic and very important to the Filipino community because “we are a community of second chances.”

“We come to immigrate to the United States to have a second chance in life. And what Prop. 47 does is that we’re not only changing records and changing lives, but we are also giving second chance,” Ong stated.

“In the Filipino community, we also don’t talk about being a felon or even misdemeanor offender. Someone with a felony conviction is too ashamed to admit that. They are not aware that there is a way to change their record and change their life,” Ong added. “That is why public information and education on measures like Prop. 47 are very important.” 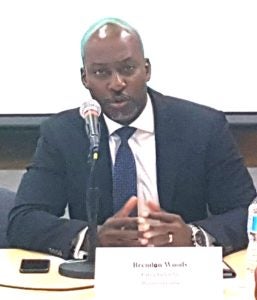 Alameda County Public Defender Brendan D. Woods was one of the sponsors of the Oakland Family Festival. INQUIRER/Jun Nucum

She said further that the large Filipino community in Alameda will surely benefit from the $6 million allocated from the prison system savings.

Alameda Public Defender Brendan Woods, together with Californians for Safety and Justice and the Justice Reinvestment Coalition, hosted the Oakland Family Festival to give hundreds of Alamedans a chance to receive pro bono legal assistance in reducing or expunging old criminal convictions under Proposition 47. INQUIRER/Jun Nucum

Members of ethnic media listen intently from panel speakers to learn the gains of Prop. 47 three years after its implementation.