Vaping Warning: The Danger of 'Popcorn Lung' and Toxic Chemicals

A 17-year-old Canadian nearly lost his lungs after five months of intensive vaping, but the ingredient suspected of doing the damage, diacetyl, is different from the substance US authorities blame for dozens of deaths.

The case, described Thursday in the Canadian Medical Association Journal (CMAJ), deepens the mysteries surrounding e-cigarettes, which have grown so popular US President Donald Trump earlier this week backed away from a proposed ban on certain vaping flavors, fearing such a move could cost him votes.

Vaping has been blamed for 42 deaths in the United States since the past summer.
Canada has been relatively spared, with only eight identified patients, and no deaths.

The CMAJ study centers around a 17-year-old male vaper who was in good health and vaping daily, particularly green apple and cotton candy flavored refills as well as those containing THC.

The psychoactive component of marijuana which Canada legalized in October of last year.

The lesions that appeared in his lungs differed from those seen in the US, where more than 2,000 people have fallen ill from what authorities call e-cigarette, or vaping, product use associated lung injury (EVALI).

In the US, the lungs of patents presented various injuries, but mainly alveolar lesions in the air sacs at the end of the airways.
Some had suffered chemical-like burns.

US investigators have recently concluded that the culprit is vitamin E oil, which is added to liquid e-cigarette refills, particularly those containing THC.

But in Canada, doctors in the CMAJ study determined the lungs of the young vaper suffered from bronchiolitis obliterans, which is inflammation of the small airways of the lungs called bronchioles.

The patient had gone to the emergency room after developing a persistent cough and doctors, believing he had pneumonia, first prescribed antibiotics, before hospitalizing him and putting him on life support.

In yet another serious health alert on #ecigarette use, researchers have documented 1st-ever case of a new form of damage from vaping products in a youth which is similar to "#popcornlung,"a condition seen in workers exposed to food flavoring fumes in microwave popcorn factories. pic.twitter.com/YLK0L51g35

The young man’s condition grew so dire a double lung transplant was considered before his condition improved.
He stayed 47 days at the hospital, his doctors told AFP.

His injuries were similar to those observed in people suffering from “popcorn lung,” a condition found in workers in a microwave popcorn factory who had accidentally inhaled diacetyl, a product used by the food industry which gives popcorn a buttery flavor.

Diacetyl is safe if ingested, but dangerous if it enters the lungs.

Studies have been warning for years that this product is ubiquitous in electronic cigarette liquids, but no case of injury has previously been reported. 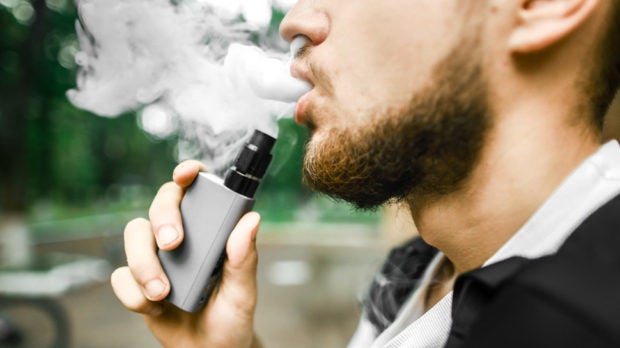 The Canadian doctors concluded that the injuries documented in the study show that vitamin E oil isn’t the only dangerous substance e-cigarette users risk coming into contact with.

Four months after leaving the hospital, the patient’s lung functions were still down to 45 percent of what would be expected for someone of his age and height, according to the authors of the study from the Lawson Health Research Institute and the University Health Network in Toronto.

“This would be classified as severe obstruction,” lead author Karen Bosma, associate scientist at Lawson, said in an interview.
“It’s similar to someone who has severe lung disease from smoking their whole life.”