You feeling the Trump impeachment hearings yet?

You feeling the Trump impeachment hearings yet? 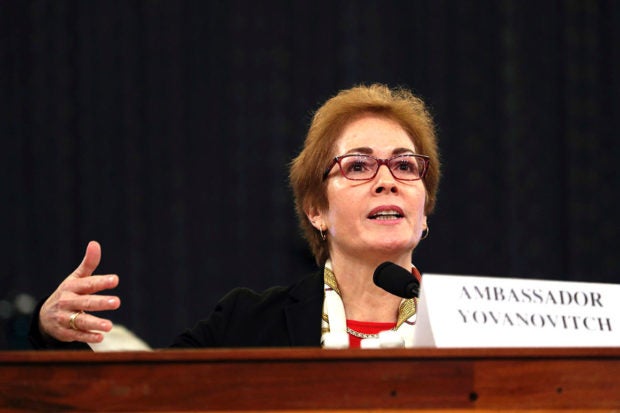 Can you name this country?  It has a centuries’ old history highlighted in modern times by the murder of a journalist, the invasion and take over by multiple foreign powers, and a people’s revolt against a government beset by corruption and cronyism.

Sounds like the Philippines. But I’m talking about Ukraine.

And now its history includes someone who looks vaguely like Cory Aquino.

If you were looking for a must-see-TV impeachment hearings hero then so far it is the former U.S. Ambassador to Ukraine Marie Yovanovitch.

I don’t know her politics. She’s served under Republicans and Democrats alike. More than 30 years. She is apolitical in a good way.

Don’t look for smoking guns in these hearings to connect. Look for the emotion.

As she testified, the bespectacled Yovanovitch brought out real emotion describing how on orders of the White House she was given one day to leave her post. Despite an exemplary record, she was yanked unceremoniously.  No reasons given. Then, in the aftermath, Yovanovitch described how Trump intimidated and threatened her in published comments, and in that July 25th phone call.

As if to corroborate her testimony, Trump was actually live tweeting his disdain for Yovanovitch, essentially  conducting a smear campaign in real time.

Did not the president realize he was intimidating a witness and any other witnesses who may yet testify? Or did he think that was normal in an America where he sees himself as above the law?

It simply underscored Yovanovitch’s emotional story which should connect to American Filipinos everywhere.

And it all happened as the news broke that Roger Stone, another Trump confederate was convicted in federal court in New York.

As Trump is watching the hearings, he now has three convicted associates we know of. Campaign chair Paul Manafort, personal attorney Michael Cohen and now his confidant Roger Stone. All guilty.

It’s as if the glass windows are falling from the towers.

Will Trump pardon them all? And we haven’t even gotten to all the Rudy Giuliani back-channel activity with indicted corrupt buddies Lev Parnas and Igor Fruman, who incidentally made contributions to Trump’s campaign.

All in due time. Trump’s miseries are only beginning.

For now, if you missed Yovanovitch you’ll have to binge watch her testimony online.

But it doesn’t have the full impact emotionally unless you know a little more about Ukraine and its proud people. And how they continue to struggle economically as they fight the threat of Russia.

If you think following all the impeachment details are complex, you should read through Ukrainian history.

If you can’t find it on the map or know its history, don’t worry. Wikipedia will give you a thumbnail. You’ll just need a lot of thumbs.

They didn’t have text messaging back then. Just cave paintings. That’s what Neanderthal settlers did.  (The real ones. Not Trump’s base).

Ukraine has a long, rich resume through the centuries that includes multiple invasions and even mass starvation.

Through both World Wars, Ukraine has always been someone’s political football, and ultimately became a part of the Soviet Union. But in 1991, it became free and independent once again.

And that’s when things get interesting in terms of what Ukraine means to modern Americans.

“Support of Ukraine’s success fits squarely into our strategy for central and Eastern Europe since the fall of the Wall 30 years ago,” said George Kent, the Deputy Assistant Secretary of State for Eastern Europe and the Caucasus, as he opened the historic impeachment session’s first round last Wednesday.

“A Europe truly whole, free, and at peace—our strategic aim for the entirety of my foreign service career—is not possible without a Ukraine whole, free and at peace, including Crimea and Donbas, territories currently occupied by Russia.”

It begins to answer why we should care.

Kent’s opening statement referred to Ukraine’s Revolution of Dignity in 2014, when the people forced a corrupt pro-Russian leadership into retreat to Moscow. Russia then invaded Ukraine occupying a part of the nation the size of Texas.

“Ukrainian civil society answered the challenge,” said Kent. “They formed volunteer battalions of citizens, including technology professionals and medics. They crowd-sourced funding for their own weapons, body armor, and supplies. They were the 21st century Ukrainian equivalent of our own Minutemen in 1776, buying time for the regular army to reconstitute.

“Since then, more than 13,000 Ukrainians have died on Ukrainian soil defending their territorial integrity and sovereignty from Russian aggression. American support in Ukraine’s own de facto war of independence has been critical in this regard.”

There’s something about a people yearning to be free that connects them to our own fight for democracy.

“By analogy, the American colonies may not have prevailed against British imperial might without help from transatlantic friends after 1776. In an echo of Lafayette’s organized assistance to General George Washington’s army and Admiral John Paul Jones’ navy, Congress has generously appropriated over $1.5 billion over the past five years in desperately needed train and equip security assistance to Ukraine. These funds increase Ukraine’s strength and ability to fight Russian aggression. Ultimately, Ukraine is on a path to become a full security partner of the United States within NATO.”

In all the cable news post-mortems, the bow-tied Kent doesn’t get talked about much.

But that opening statement explains a passion for democracy that all  Ukrainians and Americans  should feel coming out of the hearings.

“At the heart of that change mandate five years after Ukraine’s Revolution of Dignity is a thirst for justice, because there cannot be dignity without justice,” Kent said. “Without a reformed judicial sector that delivers justice with integrity for all, Ukrainian society will be unsettled. Foreign investors will not bring the investment needed to ensure Ukraine’s long-term prosperity.

“This is why the principled promotion of the rule of law and institutional integrity has been so necessary to our strategy for a successful Ukraine.”

The history of Ukraine is the complicated part. Kent simplified it and explained why you should care.

It’s also why you should be outraged at what President Trump is accused of doing, using tax-dollars intended for Ukraine as a bargaining chip to help himself.

It boils down to a simple act of bribery, an impeachable offense, according to the Constitution.

The president suggests you simply read the rough transcript of his July  25th call with President Volodymyr Zelensky of Ukraine.

The facts are there.

Ukraine is desperately trying to ward off Russia and needs weapons. The U.S. has withheld nearly $391 million in military aid.  Zelensky says he’s ready to continue to cooperate in order to buy more Javelins (anti-tank missiles) from the United States for defense purposes.

Then Trump says the key phrase: “I would like you to do us a favor though because our country has been through a lot and Ukraine knows a lot about it.”

Trump also suggests that his personal attorney, Rudy Giuliani, and the Attorney General William Barr call Zelensky to look into another matter–a conspiracy theory spread around the internet about Joe Biden’s son and his dealings in Ukraine that’s been totally debunked. But the investigation is meant as opposition research on Trump’s main challenger for re-election.

That’s the description of a bribe.

Soon we’ll hear publicly from Lt. Col Alexander Vindman, who has already testified behind closed doors. He was on that July 25 phone call that Trump calls “perfect.”

Vindman was the top Ukraine expert for the White House, and said he reported concerns to his superiors that the president was linking foreign aid in exchange for political dirt on the Bidens.

He’s also born in Ukraine, and an immigrant. A proud Ukrainian American.

It should all be compelling. The July 25th call was that important.

But remember it all began months before when U.S. Ambassador Marie Yovanovich was given orders to leave Ukraine on the next plane.

She was fighting the bad guys, and trying to keep Ukraine independent and free — from Russia.

That’s at the heart of it all–Ukraine is yearning to be free of Russian aggression in order to become a great democracy, just like ours.

Who benefits from Trump’s disruption of Yovanovitch’s mission most besides Trump?  The American people? Or the guy who has a constant battering ram on Ukraine’s door?

Yovanovitch said it responding to questioning.  Her removal keeps Ukraine “under Russia’s thrall, and that’s not in our national security interests.”

She serves in our country’s interest. Who does Trump serve?

For American Filipinos, knowing all that should make the impeachment hearings a lot more relatable, understandable.

It should also make clear why Trump’s actions as president are simply unacceptable.

And most importantly, impeachable.

Emil Guillermo is a journalist and commentator. He does a column for the Inquirer.net’s North American bureau. Twitter @emilamok. Listen to him on Apple Podcasts.