thanked the project’s prime movers, the Presidio Trust and the National Park Service and the Golden Gate National Parks Conservancy, and their officials and employees for launching the much-anticipated 14-acre Presidio Tunnel Tops project.

Pelosi especially thanked Ohlone Tribal Elder Linda Yamane, who gave a powerful message and blessing for the project being undertaken on their ancestral land. 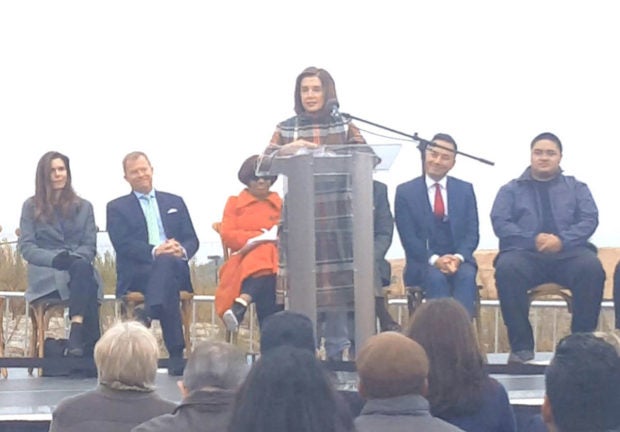 “This is something quite spectacular and it takes us to a new level of a park as an example for the rest of the country, a new level of inspiration and most importantly of involving young people,” Pelosi stated. “The diversity is a beauty of our American community here and we want that reflected in the beautiful Presidio.”

Pelosi also broke ground on the 14-acre new national parkland with park managers, other and park officials by placing the first soil atop the tunnels, literally “making ground” for this civic project.

Presidio Trust Chief Executive Officer Jean Fraser explained, “It will take us two years to actually build all the various elements of the tunnel top. We are going to have playgrounds, barbecue, overlooks, walking paths, lots of trees, plants as well as foods and places for people to sit.”

Fraser said the most challenging part of planning was making sure that they could build a park over highway tunnels for the road to the Golden Gate bridge that could stand having millions of people passing through while construction is going on.

“The park is going to cost $110 million building over freeway and tunnels and not a dime is coming from the taxpayers. The Presidio trust is putting in $20 million and really generous people around San Francisco and Bay Area community have already contributed $87 million and they promised to contribute $98 million,” shared Fraser

Excited officials and employees of Presidio Trust and the National Park Service and the Golden Gate National Parks Conservancy at the groundbreaking of the Presidio Tunnel Tops project. INQUIRER/Jun Nucum

“We want to make sure that Tunnel Tops is a place where everybody would feel that there is something for them. We are going to have large picnic benches are areas where people can barbecue for large family gatherings.”

Presidio Tunnel Tops will reconnect the city to the bay as it bridges over the newly tunneled Presidio Parkway to the historic Main Post from the highly popular waterfront below it, including Crissy Field and Crissy Marsh.

Designed by James Corner Field Operations, the firm behind New York’s popular elevated park the High Line, the Presidio Tunnel Tops will feature scenic overlooks with stunning views of the Golden Gate Bridge and the City, paths and gardens, a Gateway Plaza with food and visitor services, a campfire circle and picnic grounds, and an “Outpost” and a Field Station where kids can explore nature. No admission fee will be required of visitors.

It will eventually include gardens with native vegetation, connective pathways, scenic overlooks, a campfire circle, picnic areas, and a Youth Campus with a three-acre interactive play area designed to connect urban kids with nature. The site is immediately adjacent to the Presidio Visitor Center, newly opened in 2017, and a planned transit center.