Tom Brady says he is still nursing the sting of New England’s 2018 Super Bowl defeat as the Patriots prepare to face the Philadelphia Eagles on Sunday in the first meeting of the teams since their classic shoot-out last year.

Brady delivered one of the greatest postseason performances of his glittering career in the NFL showpiece in 2018, throwing for 505 yards and three touchdowns and finishing with a 115.3 passer rating.

But Brady’s gaudy stats were ultimately a footnote as the Eagles met fire-with-fire to win 41-33 and claim the team’s first Super Bowl victory.

Tom Brady in Philly vs Eagles

Adding insult to injury, Brady also coughed up a fumble after being sacked with just over two minutes remaining as the Patriots chased a go-ahead touchdown.

Although the Patriots bounced back ruthlessly, with Brady leading the team to a gritty Super Bowl win over the Los Angeles Rams earlier this year, the New England quarterback admitted this week the loss to the Eagles still rankled.

“You assume I’m over it? Come on now,” Brady told a Boston radio station this week when asked how he had dealt with the loss.
“That’s a lot of mental scar tissue from that year.
That was a tough game.

“In a lot of ways we learned from that year and we came back stronger the next year,” Brady said.
“I think everything is a matter of perspective and when you play in that game and you play great teams, you’re not going to win them all.

“This is not the Harlem Globetrotters vs. the Washington Generals.
This is all about tough competition against the best teams.
They deserved it that year, and now a couple of years later, we get a chance to play the organization again.

"What you have in '03 is really a core that is unmatched."

The Super Bowl XXXVIII champs were No. 32 among #NFL100 Greatest Teams. pic.twitter.com/kIfuRt93Lg

“It’s totally different circumstances.
Huge game for us.
Big game for them.
The better team is going to win.”

Both teams head into the fixture at a critical juncture in their respective seasons.
The Patriots will be looking to get back in the winning groove after suffering their first defeat of the season, a comprehensive 37-20 loss to the Baltimore Ravens two weeks ago. 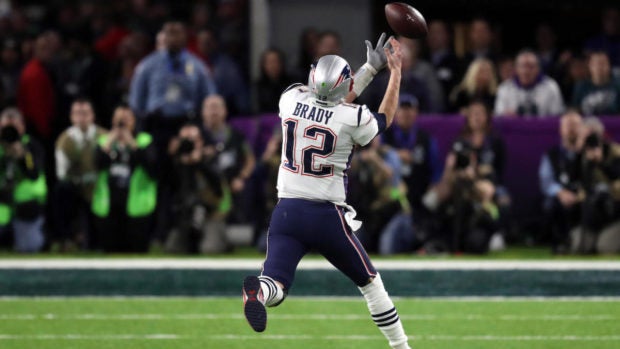 The Eagles meanwhile head into the game on the back of two straight wins, and as the Patriots, are well-rested after a bye week.

A win for the Eagles would also leave them well-placed to control their own playoff destiny at the top of the NFC East.

Elsewhere Sunday, Lamar Jackson goes head-to-head with former college rival and friend Deshaun Watson in a clash of the new generation of quarterback stars as Baltimore take on the Houston Texans.

Jackson pipped Watson for the Heisman Trophy in 2016 when the two quarterbacks were in college, becoming the youngest ever recipient of the award at 19 years and 338 days old.

While Watson disagreed with that decision at the time, maintaining he saw himself as the “best player in the country”, the Texans quarterback this week said he had nothing but respect for Jackson.

“All the criticism he was getting, he’s definitely a guy that I’ve always encouraged and talked to in the offseason,” Watson said.

“He’s a guy that’s been doing everything that all the naysayers have said he couldn’t do and even more.
His career is very, very bright and he’s going to continue to do great things.”

Check out the ‘Unicorn Puppy’

Jackson, who scored a dazzling 47-yard touchdown run last week in a rout of the Cincinnati Bengals, is meanwhile doing his best to keep a lid on the hype.
The Ravens lead the AFC North with seven wins and only two defeats.

“We just have to keep doing it,” Jackson said.
“It’s not the Super Bowl.
We’re happy because we’re winning, but we need to get to the playoffs and win the Super Bowl.
So right now, we’re just taking it one game at a time.”

Saints quarterback Drew Brees had demanded a response from his team-mates after a defeat last week he labeled “unacceptable.”

“We were extremely disappointed in our performance,” Brees said of the loss to the Falcons.
“Our execution just was not up to standard across the board.
That needs to get cleaned up and it will get cleaned up.
As a result, we’ll play a lot better.”