US President Donald Trump campaigned on Thursday for the Republican challenger in the Louisiana governor’s race, in what is seen as a test of his own political vitality as he battles an impeachment inquiry.

Addressing a rally in Bossier City, Trump urged a crowd of thousands whose votes he will depend on for his own re-election bid next year to “send a message” by electing Republican Eddie Rispone on Saturday.

Worried Republicans have reportedly poured money into the state in the final days of the gubernatorial campaign as polls show Democratic incumbent John Bel Edwards poised for a narrow win, despite Louisiana being a solidly conservative state.

This Saturday, the eyes of history are looking at the people of Louisiana. If you want to defend your values, your jobs, and your freedom, then you need to REPLACE Radical Liberal John Bel Edwards with a true Louisiana Patriot: @EddieRispone! #GeauxVote pic.twitter.com/odAuD5DFPB

For Trump, a defeat of Rispone would be a humiliation, given the president’s frequent boasting that his star power is enough to propel Republicans to victory around the country.

A similar campaign on behalf of the Republican governor in Kentucky last week, Matt Bevin, flopped, with Democrat Andy Beshear winning after a nail-biting tight contest. 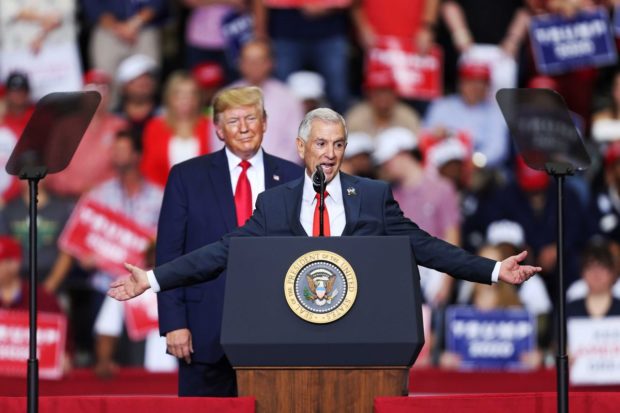 Trump, who is battling impeachment in Congress, described the contest in Louisiana as a proxy for the wider Democrat-Republican struggle ahead of the 2020 presidential election.

“If you want to defend our values, our jobs, and your freedom, then you need to replace radical liberal John Edwards,” he said.

In a speech railing against his Democratic opponents as “maniacs” and a “bunch of mad people,” Trump said Louisiana is “not going to let them destroy our country and rob your children of their future.”