2 students were killed and four others injured in a shooting at a high school north of Los Angeles Thursday, triggering a police hunt for a student who was found wounded and taken into custody.

“We do have the suspect in custody.
He is currently being treated at a local hospital.

The suspect was being treated for injuries that appeared to be self-inflicted, he told a local CBS affiliate.

“Not a deputy was not responsible… it appears to be the student himself.”

Villanueva said a total of six people had been taken to hospital to be treated for injuries.
No details were provided on whether the victims were students or staff.

Officials at the nearby Henry Mayo Hospital in Valencia said one female victim had died as a result of her injuries, while two more were in critical condition there.

The school was locked down, and eyewitness descriptions and surveillance footage within an hour of the shooting identified the suspect.

WHEN WILL THIS END.

Tell Mitch McConnell: we are FED UP with schools being hunting grounds. Put common-sense gun reform on the Senate floor for a vote, NOW: https://t.co/mZuuuRfwpQ#GunControlNow #SantaClarita #schoolshootinghttps://t.co/z9wBfHfpyJ

“All those that were injured (were) evacuated to local hospitals,” said Villanueva.

“And one of the first that were evacuated to local hospitals was what it turns out to be the suspect.”

Officers later went to his residence.

The Santa Clarita Valley Sheriff’s department had earlier tweeted that it believed there was only one suspect involved.

A tearful mother waiting beside a nearby church with other parents said she had dropped off her ninth-grader about a minute before the shooting started.

The cycle of a #schoolshooting. This one in Santa Clarita at Saugus HS in California. pic.twitter.com/kTdpaVWTa1

“I haven’t seen my son yet but I’ve talked to him.
He’s okay … He just sounded numb,” she said.

“All he’s said is he was walking through the quad and somebody started shooting and he turned and he saw that it was real and ran into a classroom,” she added.

Students told CNN they had heard multiple loud bangs that “sounded like fireworks” and began to run.

Aerial video from the local NBC affiliate showed students with hands raised being escorted by officers from the building, and led to the nearby church, as others stood outside the perimeter on their cell phones.

The @NRA wants us to believe guns make us safer. Yet 400M guns in the hands of civilians and weak gun laws have given America a 25 times higher gun homicide rate than any other high income country.

Denzel Abesamis, a student at the school, told the Los Angeles Times he was arriving at campus when he saw classmates fleeing the scene.

He called a friend who was hiding in a classroom with five other students.

“I’ve always been worried about something like this would happen since it was my actual school,” he said, adding that the school had been locked down due to reports of a threat a few years earlier.

“Saugus has emphasized the importance of making sure to always be cautious of anything that may happen like an active shooter,” he said. 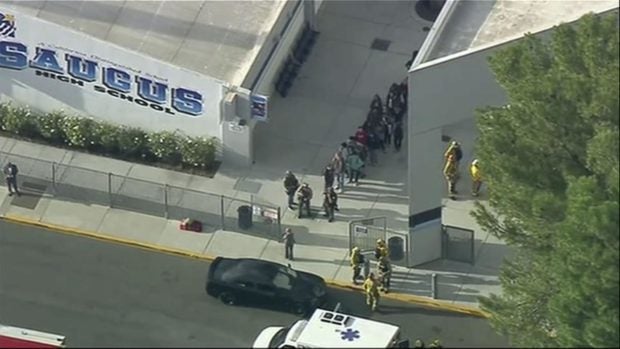 At least three ambulances were at the school campus, opposite a residential area, along with dozens of squad cars.

Agents from the federal Bureau of Alcohol, Tobacco, Firearms, and Explosives were among those responding.

The Santa Clarita Valley Sheriff’s department had warned residents to stay clear of the area.

News of the shooting broke during a debate on gun control legislation at the Senate in Washington.

Democrat Senator Richard Blumenthal was speaking in the debate when he was handed a piece of paper by an aide.

“On the floor right now there’s a school shooting in Santa Clarita, California,” he told the chamber.

“How can we turn the other way?
How can we refuse to see that shooting in real-time, demanding our attention, requiring our action?

“We are complicit if we fail to act.
It is not just a political responsibility — it’s a moral imperative.”

California senator Kamala Harris, a Democratic candidate for the 2020 election, said she was “heartbroken and praying for Santa Clarita.”

“Our children and communities are being terrorized.
We can’t accept this,” she tweeted.