When UFC fighter Walt Harris’ stepdaughter vanished last month, the man later charged in her disappearance was free on bond in an earlier kidnapping case where Alabama prosecutors say he nearly beat a man to death.

A police chief is questioning why he was free in the first place.

19-year-old stepdaughter of UFC star Walt Harris, who was last seen on Oct. 23, was harmed and is a victim of foul play, police say. https://t.co/w4s0G9xFiU

Yazeed was being held as a fugitive after being charged in Alabama with first-degree kidnapping in the disappearance of 19-year-old Aniah Blanchard.
She was last seen Oct. 23 at a gas station in Auburn, Alabama.

Blanchard, a student at Southern Union State Community College, was reported missing the next day.
Her car was later found abandoned in Montgomery, more than 50 miles (90 kilometers) away.
Police said the car was damaged and contained evidence that Blanchard had been harmed.

“I am prayerful that the Lord touches this young man’s heart so he will be honest and truthful and tell the authorities where our daughter is located,” Blanchard’s stepmother, Yashiba Blanchard, told Al.com.
“I feel as if the Lord has heard our cries and the community’s cries for help with finding our daughter.”

Yazeed, 29, had been freed from an Alabama jail in February after prosecutors said he beat a man unconscious and “near-death” in a vicious robbery, court records show.
He faces attempted murder, first-degree kidnapping and first-degree robbery charges in that earlier case.

Yazeed was out on bond at the time of Blanchard’s disappearance.

“It’s very concerning to know that someone who has committed that sort of crime was out and in our community,” Auburn Police Chief Paul Register told reporters at a news conference.
“We think this is someone who should be in custody.”

U.S. marshals were in the Pensacola area late Thursday when they called the Escambia Sheriff’s Office for assistance, Sheriff’s Maj. Andrew Hobbs said.

“I don’t know how they knew he was in the area — they got the tip and called us,” Hobbs said Friday.

Yazeed was taken into custody around 11 p.m.
Thursday near an exit from Interstate 10, Hobbs said.

“When we arrived, the suspect fled the area, but he was located by Escambia sheriff’s officers and marshals in a wooded area near the exit,” Hobbs said.

Yazeed was wheeled from the scene on a stretcher and loaded into an ambulance.
Video of the arrest from WEAR-TV shows Yazeed yelling as he’s being taken away.

Update on #AniahBlanchard search: volunteers with @txeqorg and others will start a massive search tomorrow morning, combing the 50+ miles between Auburn and Montgomery, AL. #FindAniah https://t.co/MjKTNQfZ4c

His jail booking photo shows him with a swollen left eye.

“Upon encountering Yazeed, the Marshals issued multiple verbal commands to which Yazeed did not comply,” Inspector Dominic Guadagnoli, of the Florida/Caribbean Regional Fugitive Task Force, said in a statement Friday.

“The task force members then had to physically remove him from his hiding spot,” he said. 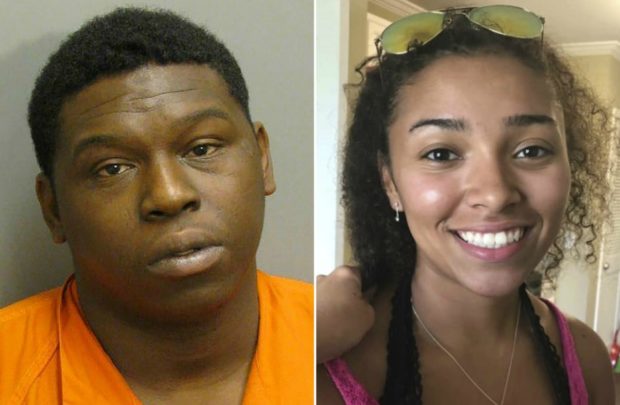 Yazeed has had a previous violent run-in with Alabama law enforcers.

In 2012, he was accused of ramming his vehicle into a Montgomery police car at a Chevron station and charged with two counts of attempted murder of a police officer.

He was fleeing from the two Montgomery officers at the time and plowed into the squad car “as the officers exited their vehicle in an attempt to kill the officers,” a court affidavit states.

Yazeed’s mother wrote the judge handling that case, saying “he felt afraid and didn’t know how to handle or control the vehicle due to so many fired gunshots towards the vehicle.”

Yazeed spent months in the county jail before a grand jury determined there was insufficient evidence to prosecute.

“I believe he is suffering some type of mental disorder,” his mother also wrote in the letter.
She said her son suffered a head injury as a child and didn’t always use good judgment.

Yazeed also wrote the court, pleading for his release.
He said it would alleviate jail overcrowding and “and save taxpayers a lot of money.”