Netherlands-born teenager Sergino Dest was named in the United States squad for upcoming CONCACAF Nations League qualifiers on Monday for the first time since rejecting overtures from the country of his birth.

The talented Ajax fullback qualifies for the United States through his American father, and last month confirmed he planned to represent the US despite interest from Dutch authorities.

The 19-year-old appeared for the US in a 3-0 friendly defeat by Mexico in September but was free to consider a switch of allegiance because the game was not a competitive fixture.

🗞 | The #USMNT’s 23 player roster for our decisive @CNationsLeague matches vs. 🇨🇦 on Nov. 15 in Orlando and 🇨🇺 on Nov. 19 in the Cayman Islands.

Dest was named in a 23-man US squad for games against Canada on November 15 in Orlando and Cuba on November 19 which will take place in the Cayman Islands.

The USA is in the doldrums following a shock loss to Canada last month, their first defeat to the Canadians since 1985.

US head coach Gregg Berhalter said nothing less than a win against Canada this week would do.

“Advancing to the knockout phase is our priority, and that starts by getting a win against Canada,” Berhalter said.

“We will be ready to play, the team is looking forward to competing in front of our fans.
Orlando has been a great venue for the National Team, and the support of our fans makes a big difference.”

While Dest is included in the squad, there remains uncertainty surrounding in-form Chelsea star Christian Pulisic.

Pulisic was originally included in the squad but continues to be evaluated after suffering a hip injury during Chelsea’s win over Crystal Palace in the Premier League on Saturday.

Veteran midfielder Michael Bradley was also due to take part but has withdrawn after sustaining a right ankle injury in Sunday’s MLS Cup final in Seattle. 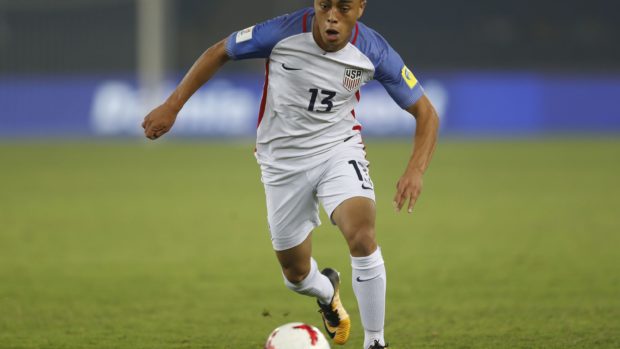