Han Ong’s ‘Grandeur’ is a rich, dark riddle about a tragic icon 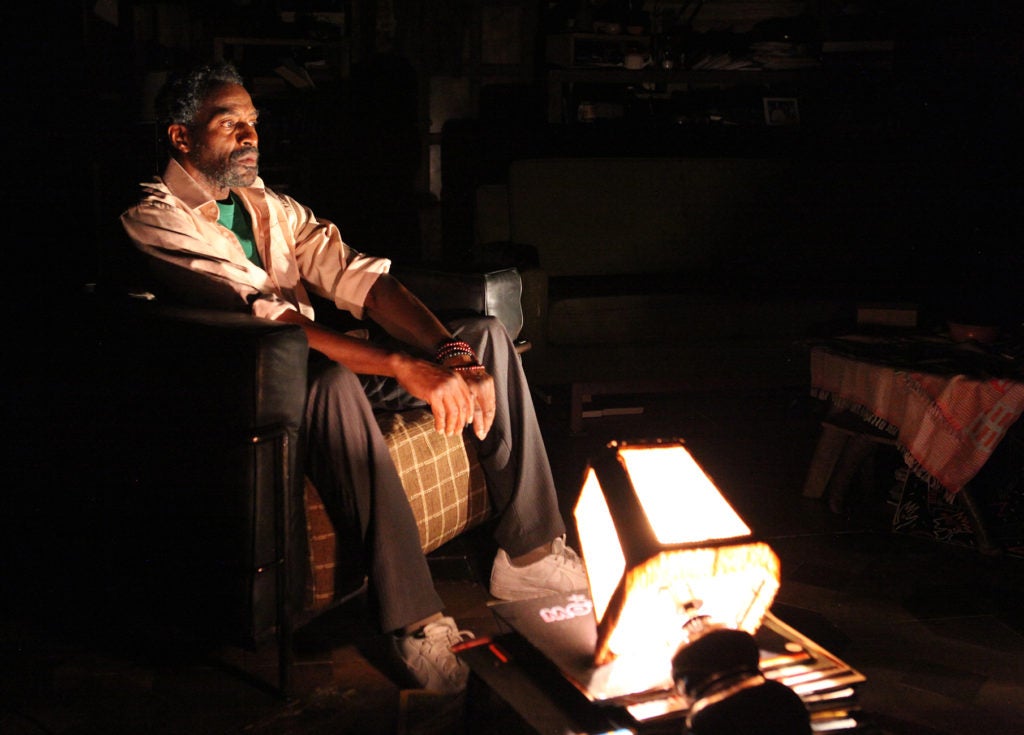 SAN FRANCISCO – The stage set designed as a cozy, rundown living room apartment, dimly lit by lamps punctuating the abundance of darkness over light, renders a very intimate experience, with the audience as silent observers and eager eavesdroppers of the unfolding tragedy.

Magic Theater’s world premiere of Han Ong’s Grandeur begins in darkness, a deep darkness where the lights of fame and fortune have ceased to shine, a darkness that is slowly illuminated, as with eyes gradually adjusting, to reveal its facets embodied by the character of poet, novelist, polemicist, musician and self-proclaimed “bluesologist,” Gil Scott-Heron, hailed as the “Godfather of Modern Hip-Hop” who had receded in the shadows as a “forgotten man.”

By the time journalist Steve Barron, played by Rafael Jordan, enters the stage to conduct an interview with Scott-Herron, played by Carl Lumbly, partly in an effort to resurrect him from the shadows following the release of his album after 16 years, the scene has taken on the quality of a renaissance painting set in the 21st century Harlem.

Barron asks Scott-Heron if he could have more light as the shadows obscure his note-taking. Barron turns on more lamps and the chiaroscuro of the scene loses its balance, veering more towards brightness as he peels the darkness open by prompting Scott-Heron with questions. 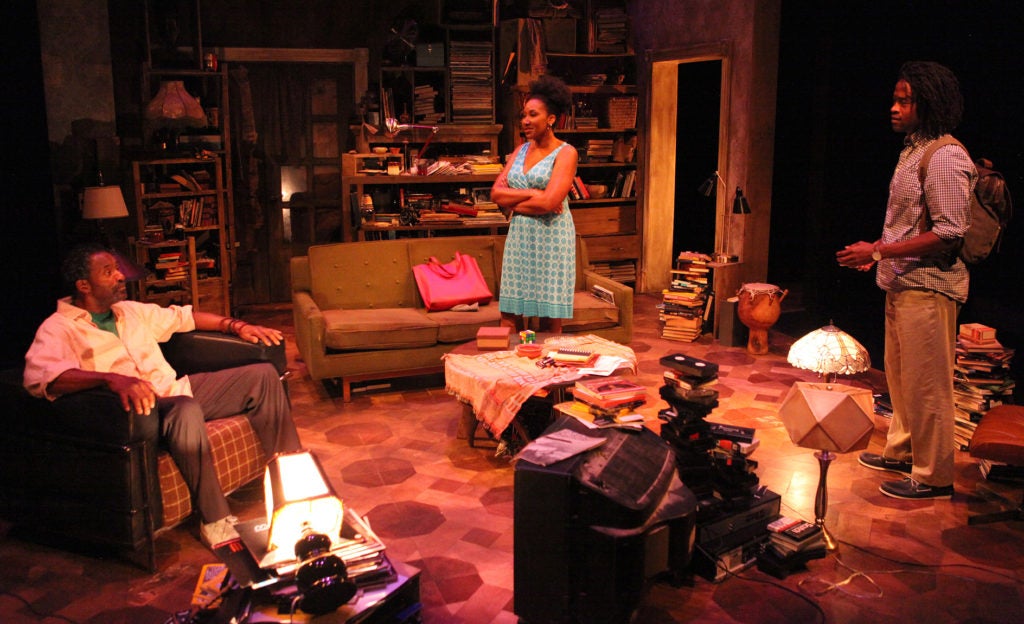 The acting is commendable. Lumbly is convincing and nuanced as the fictional Scott-Heron, a man of great accomplishments in his self-imposed foray into semi-obscurity with a constant company of demons that he temporarily allays with an addiction justified as a necessity.

Jordan, last seen at Magic Theater in the stage version of Jessica Hagedorn’s Dogeaters, effectively plays a conflicted Barron who is torn between his goal with his profession and what he discovers as he shines a light into the darkness. Fredericks as Miss Julie is believable as a reasonably stern and practical character that acts as the voice of reason who, in the end, is forced into a resignation of fate, mirroring Scott-Heron’s retreat into the quiet shadows after years of fighting against the system for change through his writing and his music.

A prolific playwright and novelist, Ong returns to Magic Theater after 25 years where his first professional production Reasons to Live. Reason to Live. Half. No Reason was staged in 1992.

Born in the Philippines to Chinese parents and immigrated to the U.S. with his family as a teenager, Ong is one of the youngest recipients of the prestigious MacArthur Fellowship or “Genius Grant” that was awarded to him in 1997 at the age of 29.

With Grandeur, Ong has crafted a haunting, intimate tragedy that tackles issues that Scott-Heron addressed in his writing and his music, issues that deal with the African-American experience, but more subdued, less blatant but no less searing after one has given it some thought. The dialogue, in parts darkly humorous, has its abundant share of poetic turns and at times riddle-like phrases that prompt one to discern messages that lie beneath the surface.

Loretta Greco’s direction gives life and texture to the characters, tangibly incorporating the play’s essence as something one can see and feel through the use of light and shadow. Greco is not afraid and seems to be at home with intimate settings that render the core of each character and the play as a whole to strongly come through. 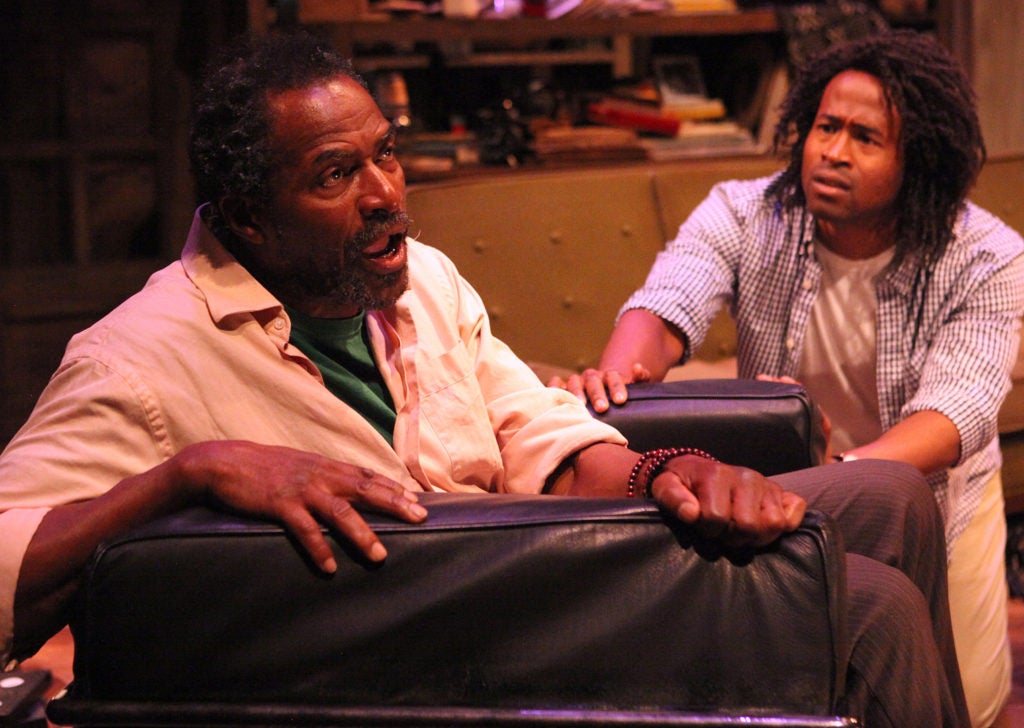 It seems that more can be told about Scott-Heron’s past in the play than what could be gathered from the dialogue between characters. And those who are not familiar with his legend would only catch a faint glimpse of it behind the character that has turned tragic.

Perhaps, this was the intended approach, to examine the effect in order to understand the cause – to see why a man of genius as Scott-Heron could be “forgotten.” “He’s the black Bob Dylan,” Barron proclaims, who Miss Julie sternly rebukes, stating that Scott-Heron is his own person, on a par with Bob Dylan, suggesting the unjust effects of racial circumstances.

At the center of Grandeur is a complex and multifaceted riddle about the dark side of the African-American artist experience, its causes and consequences; the audience can discern its elusive answer if it cares to see through a dimly lit point of view.