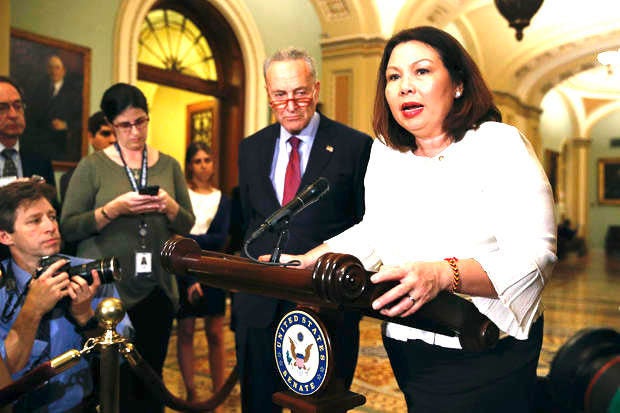 Senator Tammy Duckworth of Illinois, right, lost both her legs after the U.S. Army helicopter she was co-piloting was hit by a grenade launcher during a deployment in Iraq in late 2004. AP PHOTO

WASHINGTON —A group of Senate Democrats led by Sen. Tammy Duckworth of Illinois proposed is pushing a bill that would protect immediate family members of service members and veterans from being deported under certain circumstances.

The Military Family Parole in Place Act would reverse a 2019 Trump administration directive to Department of Homeland Security officials to deny special extensions of legal residency that had been given to immigrant military service members’ families in the past.

“Not only is it an inhumane action by DHS, it’s also just stupid when it comes to issues of military readiness,” Sen. Tammy Duckworth, D-Illinois, told Military Times.

The bill introduced by Duckworth would codify into law a U.S. Citizenship and Immigration Services (USCIS) program known as “Parole in Place,” which has been “under review” by the agency since the summer, according to a CBS New report.

The Parole in Place program has been in place for more than a decade, with USCIS offering the discretionary relief to undocumented immigrant spouses, parents and children of active-duty soldiers, active reservists and honorably discharged veterans.

The relief began under President George W. Bush, helping undocumented family members of service members adjust their legal status without having to leave the U.S. and possibly being banned from entering the country for up to 10 years.

But the Trump administration wants to end the protection as part of the president’s crackdown on legal and illegal immigration. The USCIS has not yet decided to end the program.

Since immigration hardliner Ken Cuccinelli was appointed head the USCIS, the agency has already scrapped two other parole programs: one for family members of aging Filipino veterans of World War II and the other for certain people in Haiti with family members who are U.S. citizens or permanent residents.

If the White House ends the program, eligible undocumented family members of U.S. troops would have no way to adjust their status without leaving the country.

Duckworth, who lost both her legs in Iraq in 2004 after a grenade struck her Army helicopter, said the program’s abolition would undermine morale and national security.