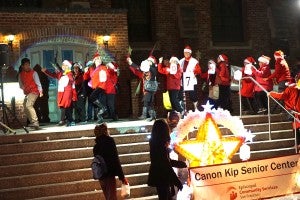 A past Parol Lantern Festival and Parade in San Francisco. CONTRIBUTED

SAN FRANCISCO — This is the time of year when Filipino culture is prominently showcased even in a universally celebrated holiday season in America, thanks to the Annual Parol Lantern Festival and Parade, now on its 14th year.

The festival is a fun-filled family evening of music, games and prizes with the brightly lit and colorful parol lanterns, and for the second year, we will be featuring artist-commissioned lanterns and a food-tasting program dubbed as Taste of Filipino Christmas.

The parol festival is scheduled every second Saturday of December, the Saturday before Simbang Gabi o Misa de Gallo, a nine-day early morning mass at St. Patrick’s Church before Christmas.

The main event will be held on Saturday, December 10 and it starts in Yerba Buena Gardens and marches to Jessie Square on the eastside of St. Patrick’s Church. Parol strollers with their brightly lit contingent lanterns gather for a lively parade and holiday festival.

This year’s theme is “Bring Our Culture to Light.” The parol festival-parade is one of the many cultural assets and community celebrations that convinced the Board of Supervisors and the City to unanimously adopt a resolution last April establishing the SoMa (South of Market Street) Pilipinas as Filipino Cultural Heritage District in San Francisco.

SoMa Pilipinas has served as a touchstone for Filipinos seeking to connect with their cultural heritage. As a Filipino cultural heritage district, it celebrates and preserves the community, individual and family narratives, common cultural memory and historical continuity promoting solidarity in the Filipino diaspora.

The annual Parol Festival is now one of the much awaited and a must-see events in San Francisco during the holiday season and among the listed “Only in San Francisco” attractions.

Each year, the SoMa community showcases the parol lantern — the quintessential Filipino symbol of hope, blessings, luck, peace and light during the holiday season — and brightens the area containing Jessie Square, Yerba Buena Lane and Mission Street between 3rd and 4th Streets.

In the Philippines it is a long-held tradition for Filipinos to make parol lanterns and holiday decor to adorn their houses, town plazas, churches, malls and all most everywhere.

To promote the parol lanterns, the Bayanihan Community Center offers free parol-making workshops every Friday at their location on 1010 Mission Street (corner 6th Street), and it is open to the public from 5:30 p.m to 8:30 p.m.

The parol festival is presented by the Filipino American Development Foundation and KulArts, in partnership with the Yerba Buena Gardens Festival, MJM Management, and St. Patrick’s Parish. For more information, contact Parol Festival at 415-348-8042, or visit www.bayanihancc.org and www.kularts.org.