US President Donald Trump called Sunday for the unmasking of the anonymous whistleblower whose complaint launched the House impeachment investigation, attacking the process against him as a “scam.”

Trump’s demand comes amid an intensifying effort by Republicans to expose the whistleblower and attack his or her credibility as public impeachment hearings loom and support for the president erodes.

Described only as an intelligence official who once worked at the White House, the whistleblower was the first to raise concerns about Trump’s attempt to pressure Ukraine to investigate political rival, Joe Biden.

On Twitter and in comments to reporters at the White House, Trump sought to give fuel to speculation in conservative media about the whistleblower’s identity, urging it be revealed.

The Whistleblower gave false information & dealt with corrupt politician Schiff. He must be brought forward to testify. Written answers not acceptable! Where is the 2nd Whistleblower? He disappeared after I released the transcript. Does he even exist? Where is the informant? Con!

“What they said is he’s an Obama person, he was involved with Brennan, Susan Rice — which means Obama.
But he was like a big, a big anti-Trump person, hated Trump,” the president told reporters, adding that he didn’t know if the reports were true or not.

He also dismissed other officials who defied the White House by testifying about the Ukraine episode as “never Trumpers.”

Trump’s escalating attacks on the whistleblower come as new polls underscore his growing vulnerability as the inquiry gains momentum.

An NBC/Wall Street Journal poll out Sunday found that 49 percent of Americans believe he should be impeached and removed from office, and 53 percent approve the impeachment inquiry.

A Fox News poll also found that 49 percent wanted Trump impeached and removed from office, and 60 percent believe he asked foreign leaders to investigate his opponents, with two-thirds saying that would be inappropriate.

A parade of current and former diplomats and national security officials have corroborated the essence of the whistleblower complaint — that Trump attempted to pressure Ukraine to investigate the president’s Democratic opponents.

At issue is whether Trump ordered the withholding of nearly $400 million in crucial military aid to Ukraine to get its new president to investigate Biden and his son Hunter.

The whistleblower’s lawyer, Mark Zaid, said on Twitter Sunday that his client had made a direct offer to Republican lawmakers to answer their questions in writing while remaining anonymous.

The offer, made to Devin Nunes, the ranking Republican on the House Intelligence Committee, underscored the whistleblower’s desire that the complaint is handled in a nonpartisan way, Zaid told CBS News. 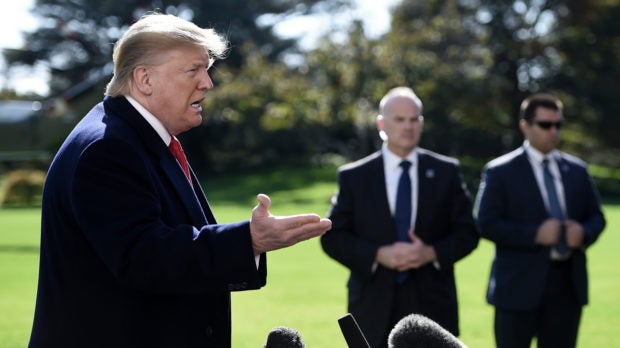 Steve Scalise, the number two Republican in the House, said the whistleblower would be the first person his side would call to testify in public impeachment hearings.

Republicans would have the right to call their own witnesses and propose subpoenas, under rules approved by the House for soon-to-be-held public impeachment hearings.

“This is a person who claims to be a whistleblower, but even the IG (inspector general) reported that this person has a political bias,” Scalise said on ABC’s “This Week.”

“There are many reports out there that the whistleblower actually worked for Joe Biden.
That concerns a lot of people.”

The inspector general of the US intelligence community, Michael Atkinson, a Trump appointee, investigated the whistleblower’s claims and, while noting “some indicia of arguable political bias,” found them to be “credible” and of “urgent concern.”