Outside the dilapidated Michigan home where civil rights icon Malcolm X once lived, Aaron Sims hesitated before confiding that he voted for Donald Trump.

In majority-black Detroit and across the nation, African Americans overwhelmingly support Democrats.
But in 2016, their voter participation dropped — and with next year’s presidential election looming, their enthusiasm has yet to return.

“I know I’ll probably get a lot of backlash from it, but I did vote Trump,” the 42-year-old activist, an example of black disenchantment with former president Barack Obama’s party, told AFP.

“I think the Democratic Party just took the African American vote for granted.”

As troubles simmered within his community, “nobody was really addressing the issues, the problems that we were having,” Sims added.

His message to Democrats for why he switched allegiances and picked Trump — who has fueled the country’s racial tensions with his divisive rhetoric — after years of supporting more progressive candidates? “You guys didn’t do anything here.”

Trump bested his Democratic rival Hillary Clinton by less than 11,000 votes in Michigan, one of three Midwestern states that narrowly flipped in the New York billionaire’s favor to give him his upset victory.

STU: "The #democrats know they can't remove @realDonaldTrump from office but they'll go ahead with the #impeachment process anyways because they detest him!" #Congress #GOP #MyTake #VarneyCo pic.twitter.com/Hbp1Dk9kq8

If white working-class and college-educated women voters played a decisive role in making that happen, Detroit also contributed to the result: Clinton received 76,000 fewer votes there in 2016 than Obama did in 2012.

Sims became a landscaper after more than a decade working in one of the many automobile factories around Detroit, the “Motor City” that is also the birthplace of the legendary Motown record label.

With its bankruptcy in 2013, Detroit solidified its reputation as one of America’s poorest major cities.

Thousands of residents have fled, and empty lots and abandoned homes abound.
The recent tourist revival downtown does not benefit the vast majority of its black population.

In the cool of an autumn morning, Sims described how his city of Inkster, adjacent to Detroit, was created to house black workers during an era of segregation.

To help youths in the crime-ridden community, he founded Project We Hope, Dream and Believe in 2012.

He dreams of turning the small, boarded-up home where he said Malcolm X stayed in the 1950s into a museum.

Three years after the election, he said he sees no signs of the economic miracle that Trump constantly boasts of, even though the black unemployment rate has reached historic lows.

Asked if he’ll vote once more for Trump, Sims said, “I’m pretty sure I won’t,” but he also sounded cautious.

“It all depends on how the rest of this Democratic primary plays out.”

Through debates, conferences and campaign stops, the big names in the Democratic race have already courted Detroit. 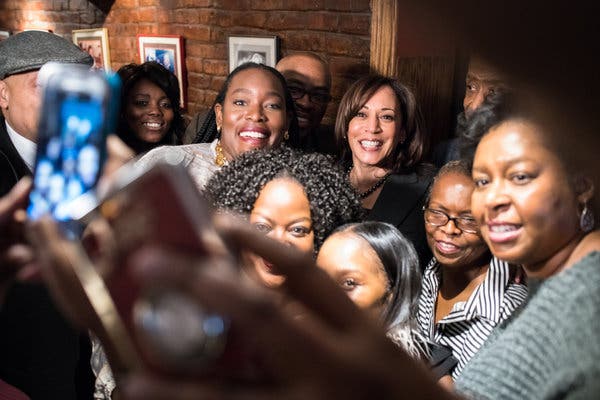 But like Sims, she also does not count Joe Biden, the former vice president struggling to maintain his frontrunner status, among her favorites.

Instead, she is eyeing Harris, who has Jamaican roots, as well as Sanders, Warren, and South Bend, Indiana’s young mayor Pete Buttigieg.

Atkinson has witnessed little economic improvement under Trump.
But even though this mother of six did not vote for the brash billionaire Republican, she shares the impression that Democrats did not fight enough to win over minorities in 2016.

“Women of color in particular… their vote was taken for granted,” she said.

Black voters are “by far” the most reliable Democratic constituency in the country, noted Eric Williams, a senior attorney with the Detroit Justice Center.

“You can’t blame African Americans for Trump,” he argued, explaining that the drop in turnout in 2016 followed record voting for the nation’s first black president.

The Democratic candidates have yet to stir a groundswell of enthusiasm, Williams said.

But current hatred of Trump “is strong enough that it will overcome any misgivings there might be about any individual candidate” come election time.

Prominent voices like that of Martin Luther King III, the eldest son of the slain civil rights icon, are seeking to inspire the community into political activism.

“This next election is one of the most critical of our time,” King told AFP after meeting with Detroit residents.

“We saw a beginning of a sea change in 2018” when Democrats scored key legislative and local victories, he said.

“That same energy, that same coalition of young people, of women, of a lot of folks from communities of color, can make the difference” in 2020.