Whoa, priest, what authority you possess!

Whoa, priest, what authority you possess! 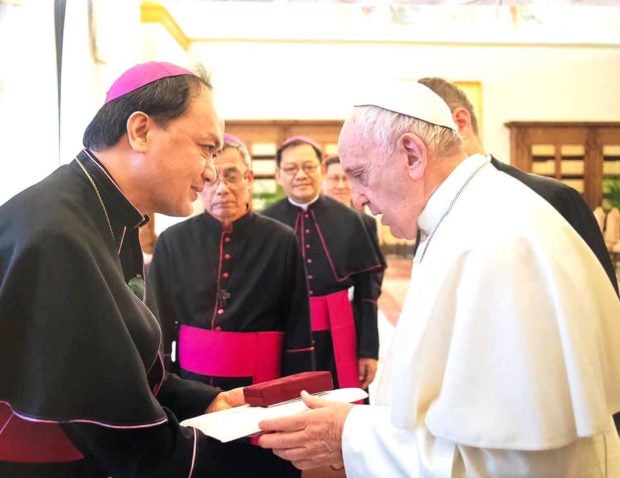 While the burden of accountability has become heavier and his prayer intentions longer, Pope Francis told the Jesuits in Mozambique last month that, otherwise, he’s basically the same person, a sinner but chosen.

“The mere fact that I now dress all in white has not made me any less sinful or holier than before,” he said, “and I still go to confession every two weeks.”

In every page of the Gospel we see Jesus consoling, preaching, praying, healing, and forgiving. Forgiving was very much part of His mission. After His resurrection, our dear Lord appeared to His Apostles and bestowed upon them the power of the keys, saying: “Receive the Holy Spirit. If you forgive anyone’s sins, their sins are forgiven; if you do not forgive them, they are not forgiven” (John 20: 22-23).

Isn’t it amazing that God gave that special authority to the Twelve Apostles and to their successors, and eventually to today’s BISHOPS and PRIESTS of the Catholic Church by virtue of Apostolic Succession? Isn’t inevitable too that mankind can no longer confess openly to God like Moses talking to YHWH in the burning bush, for humanity needs to go to the appointed mediator who is given the power of the keys?

Although an insignificant piece of a tool bag in the divine hand, the priest is made a channel of amazing grace. A sacrament or sacred sign it is, for how can a priest forgive sins if he doesn’t hear and know the sins to forgive, hence the penitent’s act of confessing with audible voice. Equally, it’s a sacrament because you and I, in return, need to hear the consoling words of absolution: “I forgive you from your sins in the name of the Father, the Son, and the Holy Spirit.”

Some friends were asking: What happens when the priest is not in the state of grace when he sits in the confessional sins or celebrates the Holy Mass? I told them what may sound antiquated but still functional, that is, the Seven Sacraments operate effectively ex opere operato, “by its own operation.”

Each sacrament actualizes Christ’s redemption that occurred 2,000 years ago, for when a sacrament is celebrated, it confers the grace it signifies. GRACE DEPENDS ON GOD and therefore the efficacy of the sacrament does not depend upon the human minister.

The Seven Sacraments we celebrate are valid and efficacious even if the priest is unworthy and/or not in the state of grace. But, they insisted, why will God store the source of infinite grace, the priceless treasure, in a clay pot, in a breakable container, in an earthen vessel, in a sinful priest?

I needed to quote St. Paul who puts the whole idea in its proper context: “We have this treasure in earthen vessels, so that the surpassing greatness of the power will be of God and not from ourselves” (2 Corinthians 4:7).

Accordingly, it appears the Holy Priesthood is divinely intended and therefore its authority to forgive sins is necessary.

Jose Mario Bautista Maximiano (facebook.com/josemario.maximiano) is the author of 24 PLUS CONTEMPORARY PEOPLE (Claretian, 2019) and POPE FRANCIS, THE CATHOLIC BISHOP, AND THE PRIEST (Claretian, 2014), conferred “2015 Best Book in Theology” by the Cardinal Sin Catholic Book Awards and the Catholic Mass Media Awards.