Young Fil-Am cartoonists set out for the mainstream 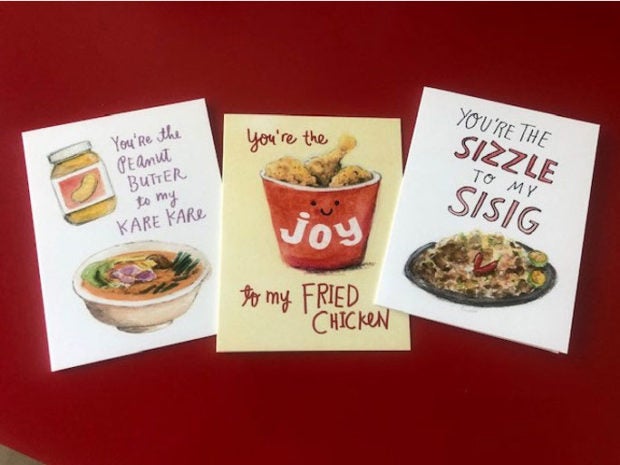 SAN JOSE, California – If a picture paints a thousand words then why can’t it be in Tagalog? And isn’t it about time sisig, ube and other Filipino favorites appeared in Hallmark cards?

This is exactly why artist-illustrators Genevieve Santos, Francis “Phranz” Baytan and Leo Aquino ushered Filipino flavors into the pop culture confectioner that is Silicon Valley Comic Con (SVCC) last August at the San Jose McEnery Convention Center. The multiverse of superheroes, manga movies, and videogame merchandise was also a space for Fil-Am stand-outs in cards, caps, books, shirts, and other collateral.

Santos’ cards call out to the hopelessly Filipino: “You’re the sizzle to my sisig,” “You’re the peanut butter in my kare kare” and “You’re the joy to my fried chicken.”

Aquino, much taken by the Filipino penchant for lampoons, has cards, caps, posters and shirts with the Starbucks logo branded “Mother of lattes.” His take on “Back to the Future” is declared in the same-style poster “No flex given.” And to the vacation-obsessed “Black Panther” fan, he offers the touristy shirt exhorting “Visit Wakanda – it never freezes here!” 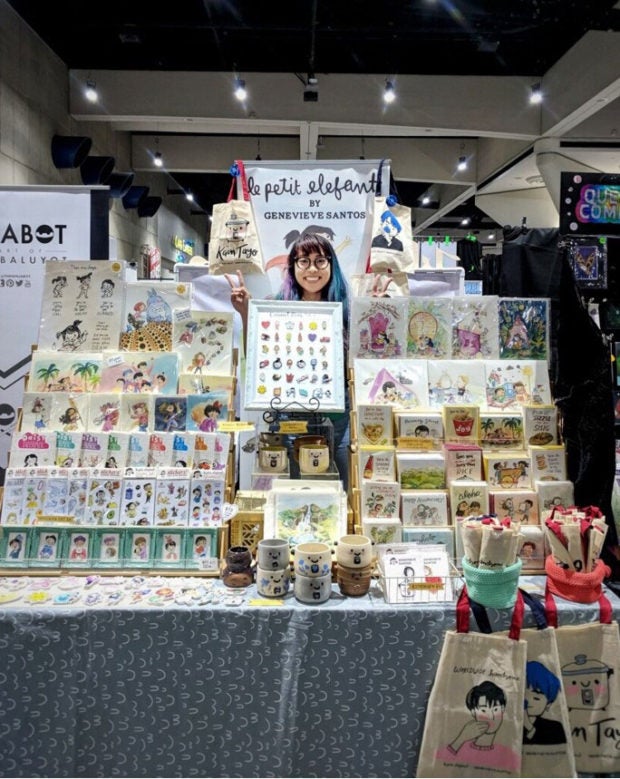 This is Santos’ third SVCC.  “I debuted my first Filipino-centric piece, Mahal Kita about six years ago. I haven’t seen any Filipino art (aside from the comic book illustrations) at the comic conventions and craft fairs I participated in. So, I was a bit nervous about how they would be received.”

“But in the end, I didn’t care what others thought. It was something personal and important to me. I was tired of not seeing myself represented and decided to carve a space for it.”

For Baytan’s first time at SVCC, “It is interestingly enough (his) successful con to date.” Baytan is best known for his Chai and Mulligan posts.

“I post Chai and Mulligan on Instagram. The art community on Instagram is very diverse and supportive. I happen to follow fellow Filipino artist Paola Olivares, @artofpao, who created a hashtag challenge, #pinoyprideweek and invited other artists to join in. Each day was a different theme. The hashtags included food like #ube and #mangga and historical figures and cultural references like #lapulapu and #ibong adarna. Paola commented how well my drawings came out and suggested I sell them as art prints, which I did for SVCC.”

Aquino said, “Being Filipino, I absolutely believe now is a great time to sell art. I feel like any art you make is in some way influenced by your upbringing and what you went through. So, be proud of what you create and share it with the world.” 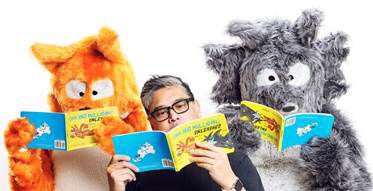 Francis Baytan with his creations Chai and Mulligan. KICKSTARTER

Some Comic Con purists may say Santos and company are not true Con artists because they don’t do fan-based art and snag only the casual walk-ins who happen to chaperone young comic fans.

But Santos, Baytan, and Aquino are accomplished artist-illustrators in their own right and they have carved their own niche.

Santos has owned and operated the stationery company Le Petit Elefant since 2009. She began illustrating children’s books about three years ago. Her best seller is her rice cooker enamel pin and ceramics. “I think the rice cooker is a universal symbol of being with family, eating happiness and comfort. I modeled it after my parents’ first rice cooker in America, so it’s very special to me.”

Santos’ art is displayed at WonderGround Gallery in Downtown Disney. She also worked with NBC Sports on cheer cards for the SF Giants and the San Jose sharks. Her projects included Santa Clara City Public Library’s book mobile, library card, and a mural in one of their branches.

She was born and raised in San Jose; her parents were from Tarlac and Manila. Santos went to the University of Southern California and finished with a BA in Communication, minor in Animation. She said, “I don’t believe people are born with a talent. Individuals are talented and skilled because they put in the work and hours for it. I’m not a formally-taught artist and more a product of working incredibly hard and spending hours drawing.” 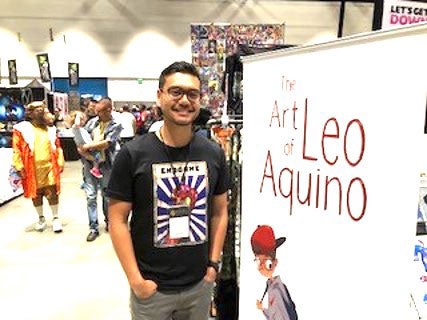 Five years into Le Petit, Santos was quite successful but burnt out. More to get relief from stress, she went to Animation Collaborative – an Emeryville school most of whose instructors worked at nearby Pixar. She works with Photoshop on Cintiq and ProCreate on iPad. But a traditionalist at heart, she prefers watercolor.

Baytan was born in Cavite and moved with his military family to San Diego. He attended San Diego State University, majored in Art but switched to Film. It took a while to finish, so he took a job in advertising. In 2014, he got an idea for a comic strip, but it wasn’t until 2017 that he posted Chai and Mulligan on Instagram. Nowadays, he freelances as a graphic artist while waiting for his comic strip to take off and possibly become an animated series on TV or a streaming service. Chai and Mulligan prints, books, and merchandise are available on Etsy.com.

He’s a veteran of many Cons including the National Cartoonist Society’s Festival at Huntington Beach, The Amazing Las Vegas Comic Con, Wondercon in San Diego and the Frankfurt Book fair. 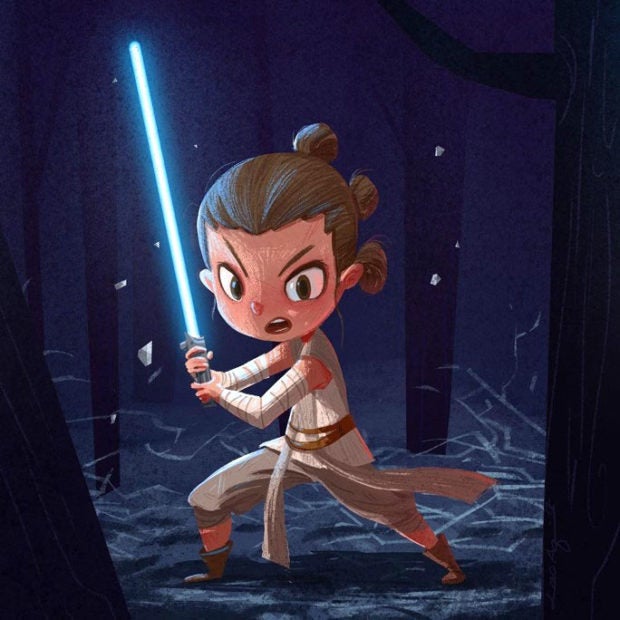 When this writer encountered Baytan on day one of SVCC, his ube art work had already sold out. He admits that Chai’s humor may be a bit “abstract” for younger readers, but it’s slice of life comic strip that doesn’t shy away from doggie poop jokes.

Baytan works exclusively on digital media. He began his comic strip with Paper on iPad and has stuck with it.

Aquino is a full-time concept artist for game studio Lion Studios and creates children’s book illustrations with the agency Lemonade Illustration. He began as a visual content artist and photo editor for Swimoutlet.com.

He was inspired by a mentor in high school and went on to the Academy of Art University in San Francisco. His major was Illustration with a focus on concept art and visual development for films and games. He also studied graphic design.

Aquino was born in Oakland; his parents came from San Miguel, Bulacan. His works that get most recognition are “pieces inspired by The Legend of Zelda and anything Star Wars related. I think this is because it gives individuals a sense of nostalgia and they get to see their favorite heroes interpreted in a different way.”

Although he has tried charcoal, oil painting, pen and ink and watercolor, “My bread and butter is digital art. Mainly painting and sketching with Photoshop. Digitally painting with my iPad Pro and Apple Pencil is quickly becoming my second favorite.”