Halfway to pulling off an epic World Series shocker, the Washington Nationals are defying the odds like few teams in baseball history in their bid to defeat the Houston Astros.

The Nationals seized a 2-0 lead in Major League Baseball ‘s best-of-seven final with two wins in Houston and only three teams have ever recovered from dropping the first two at home to win the title.

15 years ago, we set out on a journey to bring the national pastime back to our nation's capital.

Tonight … for the first time in 86 years … a #WorldSeries game will be played in Washington, DC.@CharlieSlowes // #STAYINTHEFIGHT pic.twitter.com/tWg5E2oHTS

And Pittsburgh lost three games to the New York Yankees in 1960 by a combined 38-3 only to take narrow wins in the other four contests.

But what the Nationals are doing could rival the best of them all.

Las Vegas sportsbooks made Washington the biggest World Series underdogs since the 2007 Colorado Rockies, who were swept by Boston.

The Nationals and the US capital they represent have been bucking the odds since a 19-31 start left them with a 0.01 percent chance of winning the World Series.

“What I believe in is hard work, being consistent in what we do, and sticking to our process, and we did that.”

Only the 1914 Boston Braves, who upset the 99-win Philadelphia A’s, have rallied from 12 games below. 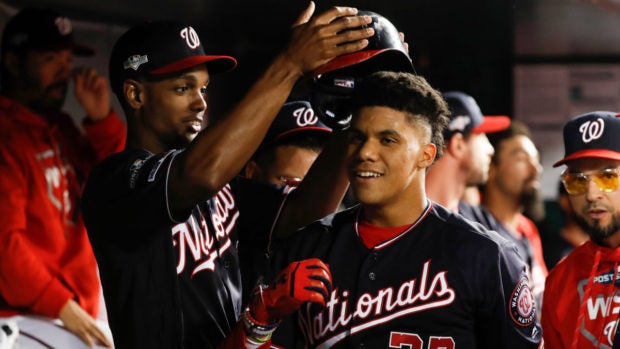 They last played in the event in 1933.
Two teams moved away and city fans went 33 years without any club to call their own until the Montreal Expos relocated in 2005.

A team that had lost all four of its prior playoff series, three of them in heartbreaking fashion, was written off by many fans.

Even when the playoffs began, the Astros were the fancied side at 6-1, the wildcard Nationals a modest 15-1 after being 50-1 in late May.

“I’d go back further than just the postseason, for sure,” Nationals third baseman Anthony Rendon said about the team defying expectations.

“When everyone started doubting us probably the middle of the year.

But even when they were saying that we need to fire Davey or we need to trade so and so or we need to clean house, clean the front office out, whatever it might be, it was kind of where we got our attitude and said, ‘Screw everybody else, we’re not worrying about what’s going outside of our clubhouse.”

Suddenly they started having fun and bought into Johnson’s message of the play to be 1-0 each day and forget the past.

And week by week they began to crawl up the standings.

“I said it all along when this team was down, I felt like we had starting pitching that could keep us in the ball games and once we got healthy that things would change,” Martinez said.

“We’re here because the boys never gave up.”

They delivered the first loss to Houston pitcher Gerrit Cole since May in game one of the World Series and scored six times in the seventh inning to blow open a deadlocked game two against an Astros team that won an MLB-best 107 games.

“We know the series isn’t over,” Rendon said.

“But for us to obviously steal two games from them at their home field is great.” So forget about the oddsmakers.

The Nationals’ epic run has made them look silly.

“We’ve kind of defied the odds at this point.

And we don’t pay too much attention to them,” Rendon said.

We were just, ‘Screw it, let’s go out and have some fun.’
Something clicked and it turned around and we’ve been trying to ride that wave ever since.”

Suddenly players were dancing in the dugout, laughing and hugging in what should be intense situations.

And star pitcher Max Scherzer has been amazed.

“We just happened to get out of the gates the first 50 games pretty slow,” he said.

“After that, we’ve been playing to our potential.

“We’ve proven that we can compete with anybody in this league.

It’s just a matter of going out there, playing high-quality baseball and making the other team beat us.”