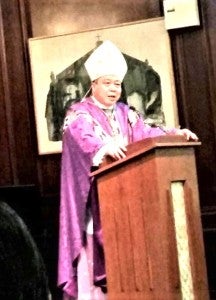 Most Reverend Bernardito Auza, papal nuncio and permanent observer of the Vatican to the United Nations celebrated the first night of Simbang Gabi; while Rev. Fr. Adolfo Novio awed his audience with the story of Waldorf-Boldt partnership. INQUIRER/Carol Tanjutco

NEW YORK CITY — Legend has it that one stormy night many, many years ago, a man and his wife went to a small hotel in Philadelphia. The couple approached the front desk hoping to get a room for the night, but there were three conventions in town and all the rooms were sold out.

The manager turned around and offered his private room to the couple. It was not a suite room for guests, so the couple hesitated, but he insisted to make them comfortable and assured them, “Don’t worry about me. I’ll be just fine.”

Next morning the couple left with a great impression: “That is the kind of manager we want to manage a hotel.”

Two years later, the manager received an invitation from the same couple, with a round-trip ticket to New York. When he arrived in New York, the man brought him to the corner of Fifth Avenue and 34th Street, pointed to a new building, and said, “This is the hotel that I want you to manage!”

That was year 1890, the man was William Waldorf Astor, who just inherited his father’s wealth, and he turned his residence into the first Waldorf Hotel, which was later developed to become the Empire State Building. 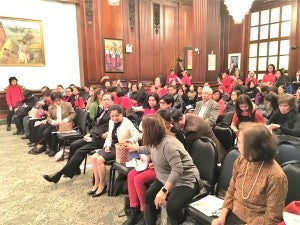 The Filipino-American community attending the Simbang Gabi was joined by Secretary Jesus Dureza, seated in front, with Consul General Tess Dizon de Vega (center). He later met with the press and community to answer questions about the peace process. INQUIRER/ Carol Tanjutco

The manager was George Boldt, a Prussian immigrant who managed the Bellevue Hotel, a small hotel at Philadelphia known for its high standard of service.

This story brought to mind Bethlehem, when Mary and Joseph were seeking a night at the manger.

Now on its 29th year, Simbang Gabi is scheduled from Dec. 6-14. Each night a group of organizations host the celebration, with different Mass celebrants.

The first day celebrant was Papal Nuncio to the United Nations, Archbishop Bernardito Auza, concelebrated by Fr. Ed Jocson. It was attended by 200 guests that overflowed the Kalayaan Hall, and the adjoining Kalayaan Hall Extension, while the rest had to wait in line downstairs at the lobby.

In his homily, Archbishop Auza emphasized the significant role of the Filipino community in addressing the cultural challenges that immigrants face, in particular the transitions and gaps from one generation to the next. He thanked the community for sharing traditions like Simbang Gabi alive in New York and sharing it with the younger generation and mainstream US society.

The theme for 2016 is “Mapayapang Pasko Para sa Maunlad na Pagbabago” (A Peaceful Christmas Towards Progressive Change). The Simbang Gabi sa Konsulado provides a venue for the Filipino-American community to continue celebrating Filipino Christmas traditions overseas as well as gives them an opportunity to collaborate, work together to organize masses, salu-salo and other events like gift-giving, raffle and community Christmas caroling. 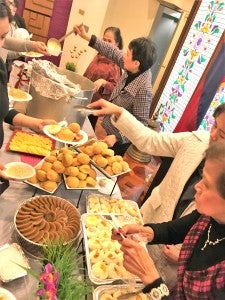 The nine-day community collaboration and after-Mass salu-salo reception is a great opportunity to come together, work towards a common goal, especially in the aftermath of a very divisive presidential election.

For the first time, members of the community are once again coordinating with each other, not talking about the current political situation but focused on the traditional meaning of Simbang Gabi.

On the same night, a Parol Lighting Ceremony, signaled the opening of the holiday season at the Philippine Center New York. The traditional parols made from capiz shells were set up at the Lobby Gallery of the Philippine Center as a way to showcase Christmas celebrations in the Philippines. The parols were sourced from San Fernando, Pampanga, a city best associated with the Parol Festival.

The Singing Teachers of the Association of Filipino Teaches in America (AFTA), the winning group during the 2016 Christmas Caroling Contest sponsored by GMA Pinoy TV, Western Union, Philippine Airlines and other organizations rendered a powerful version of Filipino holiday classic “Simbang Gabi”, as captured in this youtube video.

In her remarks, Consul General Tess Dizon-De Vega stated, “This season is a time for thanksgiving, appreciation, reflection and rededication of our values as Filipinos, our love for country, the spirit of bayanihan, and our active engagement within the community.”