At 73 years old, Neil Young could be reminiscing about his legendary past, but the classic rocker instead has his sights set squarely on the planet’s future with his latest album “Colorado.”

The album out Friday sees Young, a long-time crusader for the environment, reunite with the loud, raggedy band Crazy Horse, which has recorded and toured on and off with the superstar for half a century.

Hello, goodbye & hello again! I’m officially moving to @NeilYoungNYA. There, you will find announcements, updates and get a peek & a listen to The Archives vast content. Hope to see you in The Archives!
Love
Neil#neilyoung #neilyoungarchives #nya pic.twitter.com/nfMq2nmDTF

The prolific Canadian-born artist gathered the latest iteration of Crazy Horse high in the Colorado mountains, where they shredded in between hits of oxygen to avoid altitude sickness.

The album opens with Young’s harmonica twang in “Think of Me,” on which he croons: “I’m gonna live long and I’m happy to report it back to you,” dispelling any notion that the septuagenarian with more than 40 studio albums to his name might slow down.

Young’s signature bleeding amp reverb persists throughout the rugged album, as the rocker’s singular oscillating voice rings out with a tender fragility on weighty themes like the climate.

“We heard the warning calls / Ignored them / We watched the weather change / We saw the fire and floods,” he warbles in the environmental ballad, “Green Is Blue.”

“We saw the people rise / Divided / We fought each other while we lost our coveted prize,” Young sings over a pounding piano riff.

It’s on brand for the rocker, who has long bared his environmentalism musically, most notably with 2015’s “The Monsanto Years” that saw him attack the agricultural corporate titan over its genetically modified seeds. 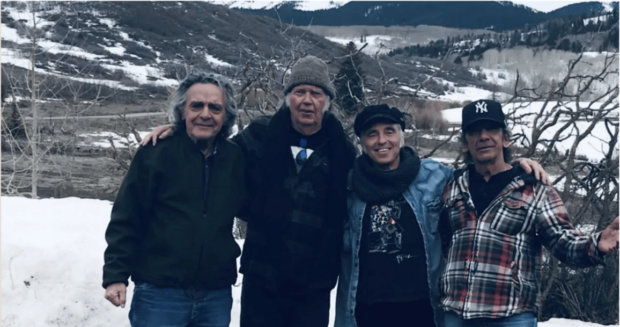 The following track, “Shut It Down,” begins with a chaotic guitar and a heart-pounding beat akin to battle march, as they chant “Gotta shut the whole system down,” loops throughout.

Nils Lofgren — a rock world mainstay and member of Bruce Springsteen’s E Street Band — recently returned to the Crazy Horse lineup, having teamed with Young and the band in the 1970s.

The Arizona-based guitarist, who earlier this year released a solo album including songs he co-wrote with the late rock visionary Lou Reed, said the rawness of “Colorado” speaks to “the horrible place we’re in, not only as a country but as a planet.”

“The idea of the wealthy becoming, you know, mentally ill with the disease of greed, money, and power — now it’s at the expense of literally the planet itself, life itself,” the 68-year-old said.

But near the album ‘s end, the track “Rainbow of Colors” — a feedback-heavy song played in the romantic triple time of a waltz — hears the band sing the chorus as a unified voice.

“There’s a rainbow of colors / In the old USA / No one’s gonna whitewash / Those colors away,” they sing, in an obvious swipe at Donald Trump administration.

“We’ll always be strong / When the people have spoken / And the walls are all gone,” Young sings.

For Lofgren, the jagged edges of the album ‘s sound contrast with “beautiful sentiments” throughout, a “kind of emotional, soulful hoping.” 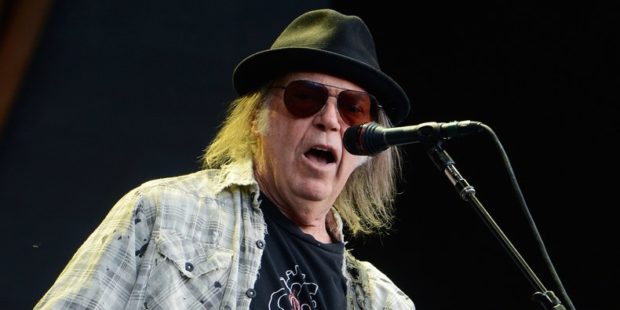 There’s a feeling of “let’s all wake up and do what we can and move this thing forward,” Lofgren said.

The album ‘s recording in a secluded “recording studio in the clouds” outside of Telluride is documented in the companion film “Mountaintop,” set for release Tuesday.

Young, who’s known for cranky tendencies during recording sessions, at one point rails over the sound volume — too low — in the documentary.

The artist’s emotional outbursts aren’t so much anger, Lofgren said, as they are evidence of “extreme frustration.”

“When you know you’re on the way to something magical musically, you want to get there sooner,” he said.
“Sometimes you get more upset about it than others.”

A tour with Crazy Horse was in the works for this fall, but the recent death of Young’s longtime manager Elliot Roberts put it on ice.

Lofgren is hopeful for a future series of live shows when he says Young’s innate talent shines.

“Unlike some writers who kind of lose the edge in front of the audience… he’s got that bug,” Lofgren said.
“Something going on in front of an audience that you’re just born with.”

“You just gotta get out there and exercise that part of your musical soul.”