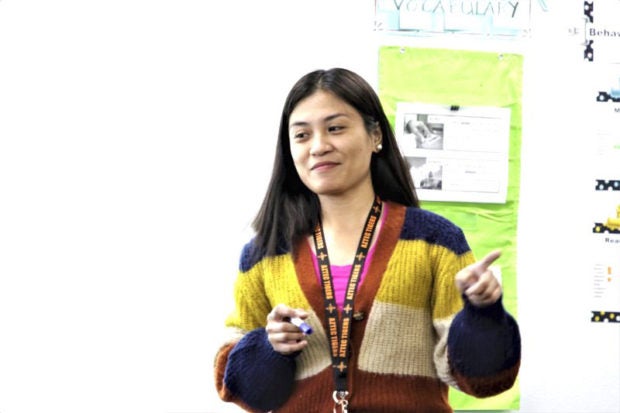 In this Oct. 6, 2019, photo, fifth grade Park Avenue Elementary teacher Erika Rose Cahilig is shown working in the classroom in Aztec, N.M. The northwestern New Mexico school district near the Navajo Nation is looking to contracted teachers from the Philippines amid a teacher shortage. (Sam Ribakoff/The Daily Times via AP)

AZTEC, New Mexuci  — It was a cold Monday morning at C.V. Koogler Middle School in Aztec. Students stumbled into Shannon Albores’ history class and take off their rumpled jackets. After reciting the Pledge of Allegiance, they greeted their teacher by saying in unison, ‘magandang umaga!‘— which is Filipino for ‘good morning.’

Albores was born and raised in a city called Cebu in the Philippines. There she earned a teaching credential and started teaching kindergarten and elementary school. She liked it, but after learning of an opportunity to teach abroad — and with it, the chance to earn a higher salary — she took the opportunity.

Albores, along with seven other teachers from various parts of the Philippines, started working in the Aztec Municipal School District at the start of the 2019 school year to fill persistently unfilled vacancies at the school district, especially in special education departments in all grade levels.

“These are positions that had been vacant for seven years,” said Tania Prokop, the Deputy Superintendent of the Aztec Municipal School District, “luckily we found a local company to bring teachers here from the Philippines.”

That Farmington-based company charges fees to those teachers, and its owner said she keeps those fees as low as possible because she, herself, paid much higher fees when she came to this country years ago through another agency that charged her twice as much.

“Our pool of teachers can be 500 to 1000 teachers big. We’re ready and willing to fill vacancies,” said Cheryl Marie Maghinay, the co-owner of Bepauche International, via telephone from the Philippines, where she was on a recruiting trip looking for Filipino teachers to send to schools across the U.S.

Maghinay herself was a teacher, immigrating to the U.S. from General Santos city in the Philippines. She got her masters degree in education in the United States, and then taught in Antelope Valley, California, and then on the Navajo Reservation in Arizona.

On the Navajo Nation, Maghinay said she saw the need schools in the U.S. had for teachers, especially in rural schools, so in 2015 she said she started Bepauche International to bring qualified Filipino teachers to the U.S.

“We check to see if our teachers are legitimate,” Maghinay said. The teachers she works with not only have to have a degree in education, and years of experience teaching, but she said she also looks for teachers with a certain amount of familiarity with U.S. culture.

Maghinay then coordinates with school districts in Arizona, Colorado, Illinois, Florida, Montana, and now New Mexico, for teachers that she vets to conduct interviews with school administrators over video telecommunications apps like Skype.

The Aztec school district isn’t alone in its teacher vacancies problem. School districts throughout the state, and the country, are in dire need of qualified teachers.

A report published in 2018 by New Mexico State University found that there were 740 unfilled public school teacher vacancies throughout the state. Some school districts have tried to fill those positions by hiring more long-term substitute teachers.

The New Mexico State University study points to factors that may explain why there might be so many unfilled teaching positions — comparatively low salaries, working conditions and high work expectations, as well as a high level of stress revolving around job insecurity and a high rate of student testing.

The problem, however, plagues school districts nationwide. A study from the Learning Policy Institute, an education think tank, estimated that the country currently has a shortage of 112,000 teachers.

Initially Bepauche worked with Filipino teachers to get them H-1B visas, which allows recipients to stay and work in the country for a maximum of six years, with the option to apply for citizenship while working. But as the Trump administration began its crackdown on immigration, H-1B visas eventually came under scrutiny, and in 2019 32% of H-1 B visas were denied, according to U.S. Citizenship and Immigration Services documents released through a Freedom of Information Act lawsuit brought by the American Immigration Lawyers Association.

Now Bepauche, and numerous international teaching contracting companies across the country, apply for J-1 visas, that technically are for students and teachers participating in “cultural exchange,” programs. The visa can be extended for a maximum of five years, and recipients cannot apply for citizenship or permanent residence.

The end result of the complex process that brings teachers from other countries to San Juan County happens in the classrooms.

Along with teaching her students bits and pieces of the Filipino language, C.V. Koogler Middle School history teacher Albores says when she teaches aspects of world history, she tries to include snippets of Pilipino history into her lesson, and how that history connects and interacts with world history — especially U.S.-Philippine relations.

That subject matter not only includes the American invasion and occupation of the Philippines from 1899 to 1902, but also the establishment of the first public school system by Americans in the Philippines.

“We learn from the culture, but at the same time we share our culture,” says Albores, “Our students are very interested. They ask a lot of questions. It’s a privilege for me to be in a history class, I can share the history of the Philippines.”

“You will learn a lot from here,” said Erika Rose-Cahilig, a fifth grade teacher who is also contracted through Bepauche at Park Avenue Elementary, “There are big opportunities for teachers to learn, at the same time, we will have a chance to share and talk about our culture.”

Maghinay moved to Farmington in 2016 to take on a teaching position at Kirtland Central High School, and, with her, Bepauche moved into a small office on Main street. With that office space, Maghinay built and now co-owns a Filipino grocery store and restaurant attached to her office called Manila Sunrise. It is filled with Filipino snacks, frozen fish, Boba milk tea and a rotating menu of Filipino dishes cooked by Mary Grace Hundumon.

“In the Philippines rice is the staple food, here it’s a side dish,” said Riva Alipin, an integrated algebra teacher at Aztec High who is also contracted by Bepauche. “We’re slowly adjusting, but we’re gaining weight because of carbs and more calories in the food here.”

Alipin, Rose-Cahilig, Albores, and five other international teachers all live in an apartment complex in Aztec.

They all agree that they are enjoying working in Aztec, but there are adjustments. Other than the cold weather, the teachers are adjusting to the food in Aztec, behavioral problems in their classes, and some still feel a little bit jet lagged from a 14-hour plane ride from the Philippines that ended in Albuquerque the weekend before school started,

“Of course we miss the food, and our family, but it’s okay, through the internet we can contact them anytime,” said Alipin, “but that is the biggest challenge we have to endure, being far away from home.”

Another challenge rarely talked about is the fee each teacher paid to come to Aztec. Bepauche itself charged $4,500 for “service fees.” Another $4,000 went to procuring visa and transcript services, and another $1,500 went toward airplane tickets and other miscellaneous travel costs.

“That’s big money in our country,” said Alipin, “like a half million.”

Albores described having to go into debt to a “loan shark” in the Philippines to help raise the needed funds.

Maghinay acknowledges the high cost, and the debt that most of her clients have to take on to pay it, but, she said, “I paid a lot of money when I first got here, so I try to make our prices fair.” The $10,000 is about half of the total amount of what she said she paid when she came to the U.S.

In 2010 a group of Filipino contract teachers filed a class action lawsuit against the East Baton Rouge Parish School Board, claiming they were cheated out of tens of thousands of dollars and forced into exploitative contracts.

Maghinay stresses that she, and her company, are transparent at the very beginning about the cost of her services.

“I have to protect our teachers,” she said, “I know what they’re going through. I remember I got depression, I couldn’t sleep when I first got to the U.S., I know all of those things. We treat teachers like our own family.”

The contracted teachers interviewed for this story had nothing but praise for both Bepauche and the Aztec school district.

“Here we found a family,” Alipin said, “We are happy to be in Aztec.”