US astronauts Christina Koch and Jessica Meir on Friday became the first all-female pairing to carry out a spacewalk — a historic milestone as NASA prepares to send the first woman to the Moon.

The mission was originally planned for earlier this year but had to be aborted due to a lack of properly fitting spacesuits, leading to allegations of sexism.

“Christina, you may egress the airlock,” spacecraft communicator Stephanie Wilson said as the pair set out to replace a power controller on the International Space Station at 1138 GMT.

In their own words: days after their historic #AllWomanSpacewalk, @Astro_Christina & @Astro_Jessica will participate in a news conference from orbit to talk about their work to conduct @Space_Station maintenance.

They began their mission with standard safety checks on their suits and tethers, before making their way to the repair site on the station’s port side, as the sunlit Earth came into view.

In a call to reporters a few minutes earlier, NASA administrator Jim Bridenstine emphasized the symbolic significance of the day.

“We want to make sure that space is available to all people, and this is another milestone in that evolution,” he said.

“I have an 11-year-old daughter, I want her to see herself as having all the same opportunities that I found myself as having when I was growing up.” 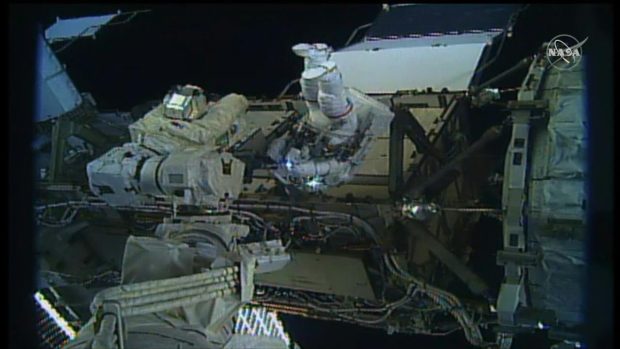 The first all-female spacewalk was supposed to take place in March but was canceled because the space agency had only one medium-sized suit.

A male-female team performed the required task at a later date.

Traditionally male-dominated NASA’s failure to be adequately prepared was denounced in some quarters as evidence of implicit sexism.

When the women astronauts had been outside the space station for about five hours, President Donald Trump reached them in a video call and told them they had made history.

“You represent this country so well,” the president added.
“We are very proud of you.”

Meir answered by paying tribute to female pioneers of the past.

“We don’t want to take too much credit because there have been many other female spacewalkers before us,” said Meir, a 42-year-old marine biologist who was recruited by NASA in 2013.

“There’s been a long line of female scientists, explorers, engineers, and astronauts.

We have followed in their footsteps, to get to where we are today.”

After the call, the astronauts got back to their repair work. 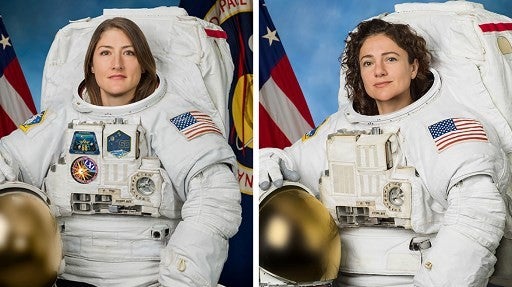 “That is a view,” one of them — it was not clear which — said at one point, as the earth was lit up in bright light from the sun.

Koch, an electrical engineer who is leading the mission, was carrying out her fourth spacewalk and was hooked up to the station’s robotic arm.

Meir, making her first spacewalk, made her way carefully across using handles.

The two were working to replace a faulty battery charge/discharge unit, known as a BCDU.

The station relies on solar power but is out of direct sunlight for much of its orbit and therefore needs batteries.

The BCDUs regulate the amount of charge that goes into them.

The current task was announced Monday and is part of a wider mission of replacing aging nickel-hydrogen batteries with higher-capacity lithium-ion units.

The US sent its first female astronaut into space in 1983 when Sally Ride took part in the seventh space shuttle mission and has now had more women astronauts than any other country.

But the first woman in space was Soviet cosmonaut Valentina Tereshkova in 1963, followed by compatriot Svetlana Savitskaya in 1982, who was also the first woman spacewalker two years later.

NASA acting associate administrator Ken Bowersox said he hoped that an all-female spacewalk would soon be a “routine” matter that would not require celebration.

Asked why it had taken so long — Meir is the 14th US woman spacewalker — he said men’s added height provided an advantage.

“There have been a lot of spacewalks where very tall men were the ones that were able to do the jobs because they were able to reach and do things a little bit more easily,” he said.

Democratic presidential hopeful Kamala Harris said the spacewalk was more than historic. “It’s a reminder that for women, even the sky doesn’t have to be the limit,” she tweeted.

NASA plans to return to the Moon by 2024 for the first time since the Apollo landings of 1969-1972. The new mission is named Artemis, after the twin sister of Apollo in Greek mythology.

The mission will likely see the first woman set foot on the lunar surface, perhaps as part of a male-female combination, as the space agency looks ahead to a crewed Mars expedition in the 2030s.