Lunch Break Lesson: How to Reverse an Opioid Overdose

At a small shop selling handmade jewelry in South Philly, employees are skipping their lunch break for a good cause.
They are getting the training they all wanted — in how to save someone who has overdosed on opioids.

The group of four is learning how to administer a dose of naloxone, a medication used to block or reverse the effects of the highly addictive painkillers.

A mannequin is placed on a table in the middle of the workshop where trainer Elvis Rosado, an ex-drug user who works for the local association Prevention Point, is showing them the ropes.

The widespread use of fentanyl — a synthetic opioid that is 50 times stronger than heroin — is ravaging America, and Philadelphia is in the crosshairs of the epidemic.

Just a few milligrams can be lethal.

“If people have to do this training everywhere, it shows there are an obvious need and an obvious problem in this country,” Rosado says.

Price of an Overdose? Two Bucks

As Rosado explains, fentanyl is everywhere.
It can be mixed with cocaine, heroin and even synthetic marijuana (sometimes known as K2).
It can also be pressed into counterfeit pills.

Sometimes, the user doesn’t even know he or she is taking it. 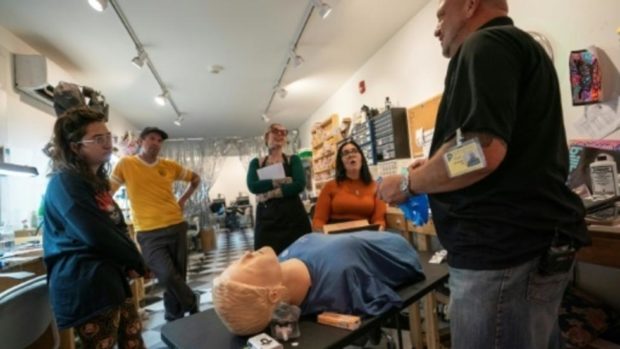 “A lot of times, people were overdosing off half of a five-dollar bag, so basically about two dollars worth was enough,” said Rosado, 54.

Result: every day in America, an average of 130 people die from opioid overdoses, according to government data.

In this relatively calm part of South Philly, the opioid epidemic is advancing, Rosado says.

In the city’s Kensington neighborhood, people are using in the open, and many users are military veterans, but in South Philly, “a lot of people are using behind closed doors,” he explains.

“They still function, they still have jobs and families.”

The fast-talking Rosado — who has been a counselor on drug and alcohol abuse for 25 years — reveals to the jewelry shop workers the first line of defense: identifying people in trouble.

“Any time you come across somebody who is extremely pale with a gurgling noise, blue-purplish (complexion)… those individuals have respiratory distress,” he explains.

“Call 911 immediately and proceed to administer Narcan,” he adds, referring to the brand-name version of naloxone in nasal spray form.

The next step is to assess whether the person is conscious, by shaking their foot or rubbing their chest — gestures that spark a reaction in anyone unless they are overdosing.

If the victim does not respond, hold their head back and inject a first dose of the easy-to-use spray, Rosado says, demonstrating on the mannequin.

He then shows how to administer other forms of naloxone — which include an auto-injector or a syringe. 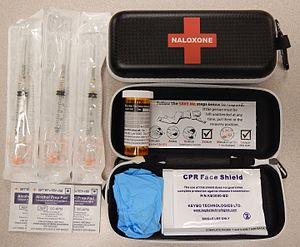 The key is to get naloxone into the system of the victim as quickly as possible.

If the victim regains consciousness, he says, stay with the person until emergency workers arrive on the scene.

“Ninety percent of the time, they’ll look at you and say, ‘I don’t know what you’re talking about.
I don’t do drugs’,” Rosado tells his class.

“Don’t argue with the person — just explain, ‘We gave you Narcan’.”

The four employees of Souvenir Jewelry listen attentively to the presentation by Rosado, who has been clean for 27 years.

He has already offered naloxone training to more than 5,000 people including the governor of Pennsylvania, hundreds of students, cops, nuns and librarians.

So far, he has been responsible for reversing 60 opioid overdoses.

But in January, he lost one person.

Rachael Dillon, the 35-year-old owner of the store, raises an interesting point: can you get in trouble if you mistakenly give Narcan to someone who has not taken opioids? Rosado is reassuring: “You can’t hurt anyone with Narcan/naloxone… it’s always better to do something than do nothing.”

The demonstration ends in just 30 minutes.
Dillon and her employees all say they feel capable of helping someone in need.

“It’s as simple as CPR,” says Dillon.
“It’s something everybody should be prepared for because it is such a sweeping problem .”

At Souvenir Jewelry, Dillon needed no convincing of the usefulness of the seminar.

Everyone at the shop has been affected by the opioid epidemic — either they have friends who ODed or they used hard drugs themselves.

Ripley Nichols, 26, lives in the Kensington neighborhood, where users are seemingly everywhere.

“I have just always turned a blind eye to it,” says Nichols.

“I am always alone on my bike and I’m like, ‘I’m just going to get home and keep myself safe’.”

Nichols says she and her friends “casually” used opioids in high school but admitted, “it got way out of hand.”

One of her best friends died at age 19 of an overdose.
Another died at 21.

“I think this is why I blocked out the drug use around me here because it was just so close to home,” she explains.

“I think I am ready to carry Narcan on me… People are dying at a very young age.”

Her colleague Katie Jean, 33, has always shied away from alcohol and drugs.

The training was “super comforting,” she says.

She once saw a friend leave a bar, shoot up and come back — she had never suspected the woman of being an addict.
Two other friends overdosed a few years ago.
One died.

“You want to make sure you are there with resources and being able to have some kind of knowledge if something bad was to happen,” Jean says.

Even if fentanyl is easily obtained, Rosado is still optimistic.

Last year, he and other members of the Prevention Point saved more than 500 people.

“People don’t want to realize it’s something that is like a disease,” says Jean.

“The more conversations, the more education, the better we will be able to assist each other.”