Donald Trump on Wednesday defended the legacy of 15th-century explorer Christopher Columbus, who is traditionally seen as the first European to arrive in the New World and who is sometimes accused of being responsible for the genocide of indigenous Americans.

This is a great day for civilization. I am proud of the United States for sticking by me in following a necessary, but somewhat unconventional, path. People have been trying to make this “Deal” for many years. Millions of lives will be saved. Congratulations to ALL!

“On Monday we paid tribute to the Italian explorer who led a voyage of discovery to the New World, a gentleman knew as Christopher Columbus,” the US president said at the beginning of his press conference with Italian President Sergio Mattarella.

“To me, it will always be called Columbus Day,” he said.
“Some people don’t like that — I do.” Trump was referring to the city of Washington’s recent decision to re-name the holiday celebrated on the second Monday of October from Columbus Day to Indigenous Peoples’ Day.

The city councilman behind the name change has said Columbus, who was born in present-day Italy but sailed on behalf of Spain, “colonized, mutilated, and massacred thousands of Indigenous People in the Americas” and “never set foot on the shores of the current United States.”

States such as Maine, Vermont, New Mexico, Alaska, and Hawaii have already re-named the holiday to celebrate indigenous communities who were already living in the Americas when Columbus and his three ships arrived in the Caribbean in 1492.

But the day is also seen as a celebration of the Italian-American community, which counts at least 16 million members, according to the president. 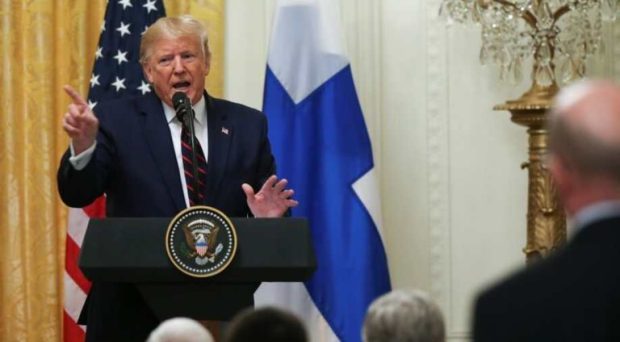 His Italian counterpart Mattarella offered also offered praise for Columbus, saying the sailor “opened up new horizons, got to know and connected continents which ignored one another.”

“Based on the role of the US in the world, it seems to me that he did a good job back then,” Mattarella said.

Trump has regularly decried efforts at “political correctness,” for example insisting on saying “Merry Christmas” instead of “Happy Holidays,” which some see as more inclusive.