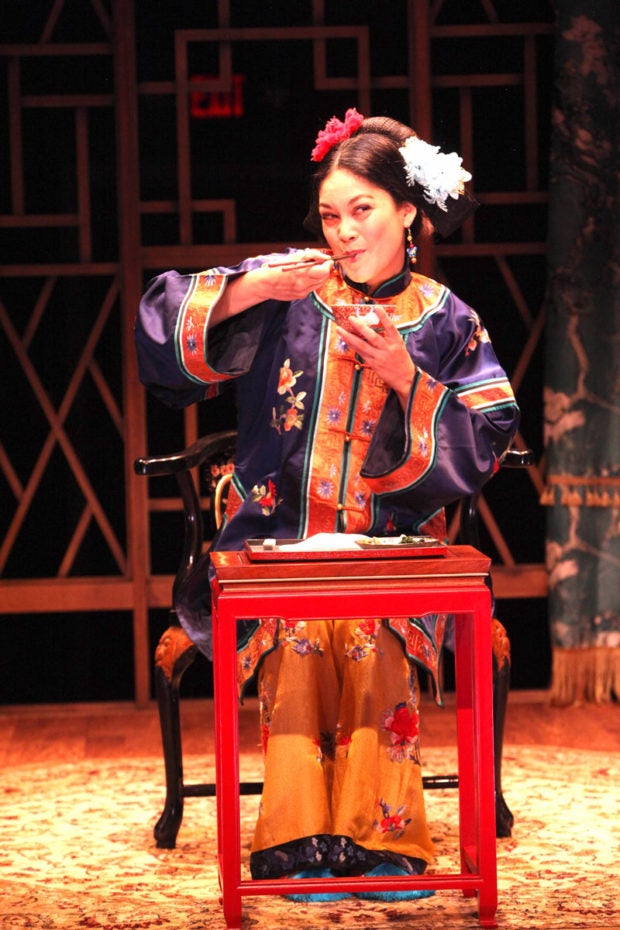 SAN FRANCISCO – Filipino American thespian Rinabeth Apostol is performing the lead role in Magic Theater’s The Chinese Lady, as Afong Moy, believed to have been the first Chinese woman to immigrate to the United States.

The play written by Lloyd Suh is directed by Mina Morita.

Afong Moy was brought to New York City from her hometown of Guangzhou in 1834 by Nathaniel and Frederick Carne and was exhibited as “The Chinese Lady.”

Advertisements of her exhibition promoted her exotic clothing, strange language, and her four-inch “little feet” that were the result of the ancient Chinese practice of foot binding. The price to see Afong Moy was 50 cents between 10 a.m. to 2 p.m. and 5 p.m. to 9 p.m. where, in a room decorated with Chinese furniture and objects, spectators saw her use chopsticks and speak in Chinese.

With her in the room was Atung, her handler and interpreter, who helped her communicate with the audience. Afong Moy was seated most of the time, but now and then would walk around the room to display her lotus feet.

Not much is known about Afong Moy’s fate after the exhibition in New York. It is said that she toured the U.S. for a few years then either went back to China or remained in the U.S. fading into obscurity.

“I don’t think a lot of us know about Afong Moy,” says Apostol. After learning that she was tapped for the part, Apostol tried to find what she could about the character. “I went to go look through all my old Asian American Studies books and I found like two or three sentences about her.”

Reminiscent of Filipinos displayed at the 1904 St. Louis World’s Fair, the minimal amount of information that Apostol was able to find was more of an objectified view and not much about Afong Moy as a person.

“Basically, just saying who she was and what she did, but not really what purpose she served. It had more to do with: she was put on display; these were the people that put her on display. Not much more context in that. She is there for a very specific job and that is to be put on display.”

Apostol tells of playwright Lloyd Suh’s frustration with the lack of information about Afong Moy that led to him writing a book about her. “He could not find any information about her. It was not until during the process of the first production of this play that he and historian Nancy Davis started sharing more information and she eventually came out with a book after the world premiere of the play.”

Suh was very specific in his notes that the characters should be played by Asian American actors and that they should speak in their natural speaking voice without putting on an accent. “Except for the scene where [Will Dao] also has to play Andrew Jackson, we talk the way that we talk, we walk the way that we walk. Obviously, I don’t have bound feet,” says Apostol. Will Dao is Atung in “The Chinese Lady.” JENNIFER REILEY

Since not much is known about Afong Moy, Apostol has to do “a conjuring of her.” “All of the stories and ideas that we’ve been able to find, written documentation, photos, etc. about her are going to help bring her to life.”

The play, at its core, is an immigrant story that many, if not most, Americans can relate to. “It transcends cultures and ethnicities. It talks about an immigrant coming into this country, and that’s exactly what it is.”

Featuring a cast of only two actors, with Will Dao who is mainly in the role of Atung, The Chinese Lady poses its own set of challenges for Apostol as the lead actor. “This in particular happens to be a 43-page script in which I’m on stage at the top of the show and I never leave. There’re only two of us, and I speak about 90 percent of the time. So, you can imagine the amount of text that I had to learn.”

It has been for her a difficult process of getting into the mindset of being present on stage from start to finish. “I’m there, I’m telling these stories as we have researched; just knowing that it’s just me and just all of the design elements could feel a little daunting at times, but I knew what I signed up for.”

She feels very fortunate to have had roles in the past that helped prepare her for this one. “There are things that I’ve been able to gather from other roles that have prepared me in terms of putting me into this actor’s mindset for it, but in terms of this specific character, that’s all research I’ve done on my own, reading the book by Nancy Davis, getting all of the information that the dramaturge has been working on, and also having discussions with the cast and the creative team.”

Apostol has been acting since she was a child and it was what she had always liked to do. Her parents turned her on to the arts and encouraged her appreciation of it. “I love the arts. My parents were very good at making sure that my sister and I were well-rounded kids and exposed us to different things culturally, even at times when we couldn’t afford it.”

Both sides of her family are very musical, and her parents were activists who, themselves, had written and performed in plays. They took her to see theater productions. “It really stems from my parents. I don’t think they thought that it was going to be what I ended up pursuing as my full-time career.”

Despite her parents’ enthusiasm in exposing her to the arts, choosing an acting career was another story. “[For] Asian parents in general, especially Filipino parents, that is not a career path that is the norm to choose. They also fault themselves because they were the ones who exposed me to the arts and at the same time. I think for them, it comes from the immigrant mentality that you do need to work hard and you do need to find success. And this is not the way that people who look like us ever find success.”

Apostol has numerous acting credits including independent films, television, and commercials. She has also been a longtime educator who teaches dance and theater. She has acted in major theatre productions and is a familiar face on the stage in the Bay Area.

However, she points out that this recent surge in roles available to Asian American actors is a “new concept.”  “It was unheard of that we would be able to do shows back to back and not worry about where our next paycheck will come from.”

She says further: “And even then, there’s just a handful of those that are available. So, you’re still up against all of your peers. And you get push back from your actor friends that are white or aren’t ‘ethnic’—‘I can’t find any work, it’s hard to get a job, oh but good for you, good for you guys’—which is also sad because it makes it sound as though it’s the only reason were able to book work, because all of a sudden people want to diversify a season in a theater when in actuality we still need to do the same work: we still need to audition, we still need to get hired.”

This includes auditioning for roles traditionally played by white actors. “They want to find a woman of color, so they will call us in and you see all your friends because they don’t know what they want. They just know that it needs not to be a white woman.”

Afong Moy was the first Chinese woman that many Americans had interacted with, cementing their stereotypes of Asian women, which still exist.

In today’s world where people’s lives are constantly on display online, Apostol draws a parallel between Afong Moy and her experience as an actor.“ Afong Moy was on display; me, Rinabeth, as an actor, I have chosen to live a life where I am constantly put on display. For me, this is my choice; just like her, she thought it was her choice.”

She points out the value of seeing plays featuring Asian American stories and actors as a way to support her community of actors.

“It’s still a rarity to be able to support Asian American actors, playwrights, and directors because we are still a risk, we are still a liability. Not everybody will put us on stage.”

Apostol recognizes all those who came before her who paved the way for her to be able to live the kind of life that she is living.

“Whenever I’m fortunate enough to be able to do work like this, especially stories that you wouldn’t hear otherwise, it always echoes back to how I got here in the first place—being a child of immigrant parents and knowing just how much richer my experiences are as a Filipino growing up in America because of what my parents had to endure. It is a firm reminder that how I am living now is still a luxury in comparison to what it was, and how many doors have been opened for me because of my predecessors.”

The Chinese Lady is a reminder of the time Asians, then labeled as Orientals, were exoticized and objectified and not considered equals by Americans of European descent. It is about being seen and choosing to see someone as the other. “It’s a really poignant and telling story. It’s scarily parallel to our current sociopolitical climate. We are almost in the year 2020, and what have we really learned? And how have things really changed? It’s a really beautiful dialogue between Afong Moy and the audience.”