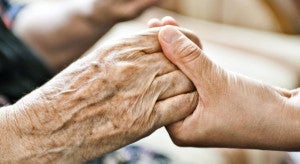 MENLO PARK, California — Dementia has been slowly stealing Ruth Perez’s memory and thinking ability for 20 years. Her daughter, Angela Bobo, recalled when it was clear that her mother was never going to be the same.

“She would put food together that didn’t belong together — hamburger and fish in a pot. Mom never cooked like that,” she said.

The mother and daughter live together in Yeadon, Pennsylvania, just outside of Philadelphia.

Perez is literally in the center of the family. She spends much of her day tucked under a fleece blanket on a recliner in the middle of the living room. The 87-year-old doesn’t seem to notice as her daughter and grown grandchildren come and go, but they keep up a steady one-sided conversation with her anyway.

“If I kiss her, she might lean towards me, and sometimes she’ll nod,” said Bobo. “What she can do, at times, is smile at you and say a word like, ‘uh huh.’”

Perez can’t lift her arms or move her legs.

A rotating crew of family members takes turns caring for her. They are experienced and they have routines and schedules; but a few months ago, the pressure of lying in one place created a small blister on Perez’s hip. The blister burst and that became a bedsore and wouldn’t heal.

“I couldn’t get it to go away,” Bobo said. “When I say we were at our wits’ end to fix this, we were beyond there.”

About 44 million Americans are unpaid family caregivers like Bobo — sometimes for a child with special needs, more often for a frail older adult, according to a 2015 estimate from the National Alliance for Caregiving.

They are often women with a full-time job and children, though now 40 percent of caregivers are men, and millennials are becoming more involved in caring for someone at home, says John Schall, CEO of the Caregiver Action Network.

“In too many cases, people just learn this stuff by themselves and that’s really kind of dangerous,” Schall said.

That’s because many people don’t have the necessary skills. Thirty-three states have adopted legislation requiring medical centers to give caregivers basic training or instructions when a patient heads home from the hospital, though how this is carried out is largely up to the hospital.

Ken Everhart, a retired tech guy from North Carolina, became a caregiver for his wife, Genie, for just a few months 10 years ago, when the two were in their mid-50s.

He worried he’d drop her as they struggled to get to the bathroom. He wasn’t sure when to call 911. That uncertainty weighed on Ken — especially when Genie was rushed back to the hospital three times.

“I had given her a straw to drink out of, and a sippy cup, and I went to make a phone call. I wasn’t gone five minutes and I came back in and she was choking,” he said. “I should have sat her up, and I should not have allowed her to have anything to drink while I wasn’t in there to watch. But I didn’t know that.”

Many families can’t afford to use trained caregivers. Hiring help at home for just a few hours a week can cost $10,000 to $15,000 a year.
“When patients leave the hospital, they generally leave quick and sick,” said Susan McAllister, medical director of quality in the Division of Hospital Medicine at Cooper University Health Care in Camden, New Jersey. Her team includes the social workers, home health nurses and others who help plan a patient’s discharge from the hospital.

McAllister said these days it’s common to come in with a heart attack, get medicine to open a blocked artery, and leave just 48 hours later. The short hospital stay isn’t a problem, she said, but the transition home has to be done right.

In October, Minnesota became the latest state to pass laws to prepare potential caregivers to know what the sick person may need. California, New Jersey, Oklahoma and New York also have versions of a Caregiver Advise, Record, Enable (CARE) Act. Across the country, AARP has lobbied strongly for the proposals.

These laws generally require hospitals and rehabilitation facilities to record the name of the caregiver in the patient’s medical chart. Medical centers and rehab centers must offer caregivers basic training or instructions, and the caregiver is supposed to be notified if a patient is discharged to another family member or back home.

McAllister said years ago, Cooper realized it needed to do a lot more to make sure people were healing safely at home. From day one, caregivers are part of discharge planning, she said. On day two, a social worker might help the family shop for help at home.

“On day three, we may start teaching inside the hospital,” McAllister said.

Hospitals don’t get paid more for those extra steps. But now Medicare hits medical centers with a financial penalty if too many patients bounce back to the hospital and have to be readmitted. The federal government’s Hospital Readmissions Reduction Program was created under the Affordable Care Act.

“It scares you,” said Angela Bobo. “When I’m in pain, I can tell you. She can’t tell me that’s she’s in pain.” So when her mother’s bedsore wouldn’t heal after so many days, Bobo said, “That’s when I said: ‘I’m going to take her to the doctor’s, because I don’t know what’s going on with this.’ ”

Bobo took her mother to the doctor, and he basically wrote a prescription saying her mom needed more help. That way, Medicare paid for skilled nursing care at home, and Angela Bobo got lessons in cleaning and dressing her mother’s wound. Now she knows what to expect.

“I told her it’s going to get worse before it gets better,” said David Wilson, a registered nurse from Crozer-Keystone Home Health Services who went to Bobo’s house. He’s a wound-care specialist whose job is house calls.

“To get a wound better, you have to remove the dead tissue and start from the ground up,” Wilson said.

Some nurses come to the house, do their job and leave, but Wilson said teaching is part of his work. Lots of times he’s the one nudging reluctant family caregivers who worry they’re going to do the wrong thing.

“I will tell you in home care, the biggest thing is fear,” Wilson said.

Wilson made several visits. He recommended a new wound-care regimen for Ruth Perez’ bedsore, and Perez got an airflow mattress that relieved the pressure on her skin. Medicare paid for that, too. The nurse returned several times to check on the family, and Bobo said that gave her more confidence that she was doing the right things to care for her mother.

This story is part of a partnership that includes WHYY’s health show The Pulse, NPR and Kaiser Health News.